Diamondbacks 4, Phillies 1: Zack dials it up to ten

The D-backs made it nine home-runs over two games at Citizens Bank Park, and that was more than enough as Zack Greinke looked once again like the ace we wanted.

Share All sharing options for: Diamondbacks 4, Phillies 1: Zack dials it up to ten

Zack Greinke threw eight very solid innings for the Diamondbacks, and became the fastest Arizona pitcher to reach 10 wins since Brandon Webb in 2008. After a one-out solo home-run in the first inning, he didn't allow another hit until the seventh inning in Philadelphia, and ended up throwing three-hit ball over those eight innings. He walked one, struck out six and lowered his season ERA to 3.54. Even more impressively, over his last seven starts, Zack is 7-0 with an ERA of 1.90, and a K:BB ratio of 41:6. He may be a credible candidate for June pitcher of the month, with an ERA over 31 innings of 0.87 [Jon Lester's 0.38 ERA will need to go away first though!]

For the record, here are the other Diamondbacks pitchers who have got to ten wins in the first 70 games of a season, along with their records and ERAs.

Damn, at the risk of stating the bleeding obvious, Johnson and Schilling were good, weren't they? That run of 2000, when RJ had a 1.42 ERA, what's perhaps more amazing is there were three starts that he didn't win. Oh, in those, he had a K:BB ratio of 38:3. Greinke's approach has a much higher ERA, but that's entirely down to his early struggles. He has been really good of late, and the wins have kept coming. The streak of seven straight wins is tied for the fifth longest in Diamondback history, with Patrick Corbin in 2013 and Ian Kennedy in 2011. Ahead are two Big Unit streaks of eight and nine, plus Webb's 11-0 run overlapping the 2007-08 seasons.

This game was almost like the Diet version of yesterday. An early Philadelphia advantage was once again obliterated by home-runs, albeit a smaller portion, perhaps suitable for the more mature Diamondbacks' fans. After falling behind in the first, unlike last night, there was no immediate response today, and I was beginning to get a bit nervous, as the innings rolled around with Arizona still trailing. I though we were going to get back into this in the third, as the Curse of the Phillies' Second Basemen struck again, turning what should have been an inning-ending double-play into a two on, one out situation, but Michael Bourn and Paul Goldschmidt couldn't capitalize.

We went into the fifth inning, still a run down, but Nick Ahmed quelled my fears. He clattered his fourth home-run of the season, 397 feet to left-field, and you could almost sense the Arizona dugout exhaling. Jean Segura singled, and stole second as Michael Bourn struck out (as an aside, remember when Bourn was hitting .400? Now, not so much. Since May 29, he's batting .180 - 11-for-61, with 23 strikeouts - and looking like the guy deemed not good enough by the Atlanta Braves). But Goldie rendered such bag-swaggery moot, with his 14th home-run of the year, 392 feet to left, and Arizona was suddenly 3-1 up.

Greinke responded with a shutdown inning. Actually, there had been quite a lot of those. After the home-run, Zack went on a streak where he retired 17 of 18 Phillies faced, without allowing a hit - a two-out walk in the second was the only baserunner allowed. He did get into some trouble in the seventh, after Jake Lamb's 13th homer had made it a three-run game. A single and double put two men in scoring position with one out, and Greinke then fell 3-0 behind the tying run, in the shape of Maikel Franco, who also leads the home team in HR and RBI. Zack did a great job of escaping the jam, however, fanning Franco, then getting a fly-ball to end the inning.

Another 1-2-3 inning followed, and that ended Greinke's day, though at 94 pitches he could likely have gone for the complete game, had it been deemed necessary. Instead, Chip Hale turned to Brad Ziegler, who allowed a one-out bloop single, then got Ryan Howard to hit into a game-ending double-play for his 15th save. Man, Howard is just awful, this year: he's batting .145, while the Phillies are paying him $25 million. Oh, and they have to give him $10 million to go away next year, if they don't exercise their option. That April 2010 five-year extension is, arguably, the worst contract in baseball history.

As for the D-backs, they outhit the Phillies 11-3, and those 11 hits all came from five players having a multi-hit day. Nick Ahmed got three, and is now batting .221, basically at his career average. Segura, Goldschmidt, Lamb and Welington Castillo all had two-hit days. Goldie is hitting ,290 for the season now, not far short of his career average either, and with his OPS at .943, it's clear any concerns about his struggles in the early going, were clearly in our mind much more than in his. Peter O'Brien went 0-for-4 with a pair of strikeouts, but did actually battle, seeing a total of 27 pitches, including a 12-pitch at-bat. So, as ohfers go... 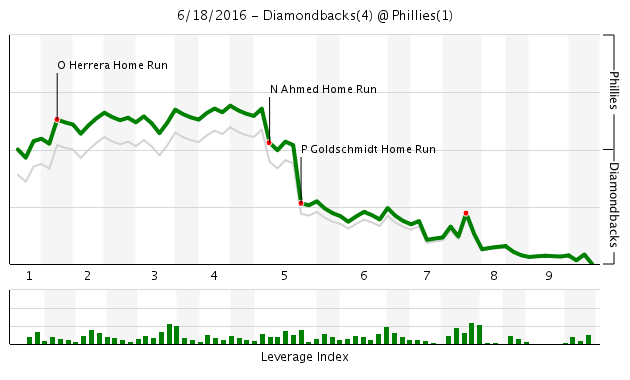 You are the enemy of the Man from UNCLE,

We will reconvene tomorrow, even earlier - 10:35 am first pitch! - for Archie Bradley's start, as he seeks to make it three in a row and seal a series win in this odd wraparound set.