Another night, another ace slain by the Diamondbacks.

Share All sharing options for: Diamondbacks 5, Marlins 3: Jose who?

With two outs in the bottom half of the sixth inning, it's safe to say that Jose Fernandez had been every bit as touch as feared. Specifically, he had a perfect game to that point, having retired every one of the 17 Diamondbacks to have come to the plate. It had been a brutal display of power pitching, with eight of those 16 having been retired by the strikeout. We had seen Fernandez's fastball touching 98 mph, and the slider looked almost indistinguishable from the the fastball - until it vanished out of the strikezone at the last minute. Seven of those eight K's were on swinging strikes, with Nick Ahmed in the sixth the only one not to go down hacking.

Meanwhile, Zack Godley was... good. Not great: he seemed to be suffering from some first-night nerves walking the first hitter he faced on four pitches, and then going 3-0 on Martin Prado, eventually allowing a single to to put runners on the corners with no outs. He allowed an RBI groundout to give the Marlins the lead, but too Godley's credit, settled down very nicely after that. That started a short series of eight in a row retired by Godley, although he gave the Marlins a second run, on a solo home-run with two outs in the fourth. He went six innings, allowing two runs on four hits and three walks with three strikeouts: a quality start, but the way Fernandez had been pitching through 5.2 innings...

But not long after St. Penelope made her appearance in the Gameday thread - remember, kids, correlation is not causation [except when invoking SnakePit deities, when you know it damn well is] - things performed a dramatic turnaround. This began with a home-run from an unexpected source. Michael Bourn, whose last long ball was all the way back in 2014 for the Indians, since when he had been a homerless part of both the Braves and Blue Jays, before joining Arizona. Oh, and he was also hitting in the ninth spot today, behind the pitcher. So, what does he do? Deposits a 1-0 pitch, 402 feet into the bleachers.

No more perfecto. No more no-hitter. No more shutout. And I cannot remember the last time that a starting pitcher has been so dominant, and then unraveled so completely. It took Fernandez five further attempts to record the third out in the sixth inning. First, Jean Segura singled. Then Jake Lamb doubled, Segura opting to ignore the stop sign thrown up by Windmill Williams - and, of course, scoring safely. Paul Goldschmidt singled home Lamb, and David Peralta finished the hit parade, with Arizona's fifth consecutive knock with two outs, an RBI triple. In just 15 pitches, Fernandez had gone from perfection, to not even getting a quality start.

It was particularly comforting for the Diamondbacks to comeback in this fashion, considering it was a not dissimilar meltdown in the seventh which condemned them to defeat last night. True, the Marlins had scored more there, but the utter domination Fernandez had exhibited up to that point, made this evening's unlikely turn of events, all coming with two outs in the fifth, perhaps even more of a shock. In the space of 10 days, the Diamondbacks have now beaten both the AL and NY reigning Cy Young pitchers, and now, the pitcher third in the majors by fWAR, with the best K-rate in the majors (13.26 per nine innings), who had won his last eight starts, posting a 1.38 ERA.

Of course, there was still a little more work to be done this evening. Chris Herrmann helped out, getting his sixth home-run of the season. Tyler Clippard came in for the seventh inning, after having had a real cluster of an outing last night, but put up a zero, albeit around a couple of hits. Things were kinda nervous in the eighth, as Daniel Hudson allowed a solo home-run to lead things off, then hit the next batter, and one batter later, a Lamb error put the tying run on base with one out. But he buckled down, finally ending the inning as former Diamondback Cole Gillespie hit a long, high fly-ball which dropped safely into Yasmany Tomas's glove on the warning track.

The ninth also had its share of moistness on the palms, after Brad Ziegler gave up consecutive hits to open the ninth, and once again the tying run was on base, this time with no outs. Naturally, Ziegler duly Ziegled, getting his trademark ground-ball double play, and then striking out the final batter for his 12th save of the season. The Diamondbacks offense was evenly distributed, seven different players getting one hit apiece, and they won despite 12 strikeouts and no walks. It was the first time since July 31, 2008 where they had 10+ K's, no walks and still got the victory. 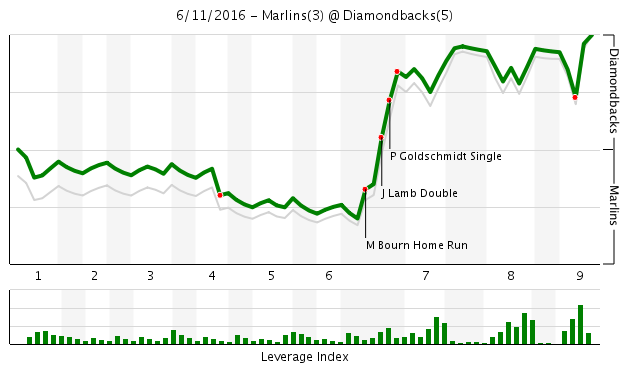 Thank Saint Penelope for her intervention

and beseech her for healing home runs.

We'll be back for the rubber game tomorrow afternoon at Chase Field, which sees Robbie Ray seek to continue his homer-hitting streak against teams from Florida...