Diamondbacks 6, Marlins 8: Blue can, green can, you can beer cap

Something of a collaborative beercap here.... It takes three authors to carry all the suck in the seventh inning...

Share All sharing options for: Diamondbacks 6, Marlins 8: Blue can, green can, you can beer cap

I can't believe Turambar was gonna title this " TGIF beer cap" or something lame like that. Anyways, O'Brien is back: stretch Cadillac, fruit cocktails. I think we are all grateful for this, and him. Praise be. Now, this beer cap is in full effect.

Brought to you by QT. God, they used to be quick but NOOOO. Now they have like 4 guys making pizzas and one guy on register even though the line is long AF and I'm very thirsty. To the game! Corbin does good with the first two batters he faces, pop outs to the OF. Then Yelich hits one to Tomas and Tomas has to move like four steps to his left and misses an easy catch. Two steps to many for Golden Corral... I mean, Tomas. Sorry, not sorry. Next batter hits a base hit and its 1-0 Miami. Mattingly's face swells a bit. Stanton up now.....Anddd Tomas can catch. That's the top of the first, bro.

My go to corner store IPA. Much refreshing. Bottom of the 1st. 2 quick D-backs outs the Goldy blasts one so hard to the Miami 2nd baseman, now that 2nd baseman needs reconstructive everything surgery. Goldy steals 2nd. And Prado ends us. Mattingly's face swells even more. It's like the one blueberry in the pack that's huge, grey and slightly molded.

Beer 3: blue can and a smoke break.

And I return to ZERO production in the bottom of the 2nd. Mattingly's face is so swollen at this point he is now only two swolls behind Clint Hurdle's face. More blue cans, more pain.

Top of 3rd and Corbinski gives up two base hits. Runners on 1st and 2nd base, my thirstiness compiles. Anddd, Corbinski gets the last out with ZERO damage.

Bottom of the 3rd and WHAAAAT? Ahmed with a lead off double. Ahmed takes third on a turrrible pick off attempt. Mattingly's face is now 5 swolls back from Hurdle's face swoll. And we score after Corbinski hits a double. Mattingly's face is now 6 swolls below .500. Segura lays down a very thick, nasty, dirty bunt down the third base side. Corbin to third base. Mattingly now looks like he has been using meth for a month straight. Bourn with a sac fly, Corbinskiov scores. Goldy up and he makes it to 1st on a base hit. MORE blue cans. Very parched. Beef walks. O'Brien up, he's clearly trying to hard and he strikes out, Upton style.

Beer 3:  Deep in the Green IPA by Grand Canyon Brewing

Bullet points? Ed returns top of 6th and we lead 5-1. God, I hate bullet points, but I love blue cans. Corbin still looking decent, Hall's forehead still looking skyscraperish. Bottom of the 6th coming up. On a side note I never demanded anything, and Turambar is a bot.
Bottom of the 6th, 2 outs and The Lord Emperor approaches....Goldy is intentionally walked AGAIN. Beef up now. I wonder why beef drops a knee when he swings? How low can he go, bro? Segura steals third base gliding gracefully on his belly. Such majestic. And beef barely swings and strikes out, he may be hurt.....
smoke break, blue can, and the top of the 7th happening..........NOW.
Corbin puts two on base, one out. Corbin walks the next batter and the bases are loaded. Hale does what Hale normally does and that is bring in our terrible bullpen even though the starting pitcher did well. Let's see what happens next folks. If I was manager, with this lead, I would leave Corbin in to finish the inning. Literally all we needed was a double play but Hale is Hale and btw Fffffffffff Hale. I'm tired of it. Kille me. More blue cans. F Hale. F Hale. f Hale. F Hale F hale. F hale. Grand slams by some nobody. F Hale. F Butcher. MF Hale. F Hale.
Seriously why are the fans not booing? Hale bad. F Hale. Kille me. f Hale. F hale. F hale. F hale. Kill yourself hale.
All we needed was a ground out double play and we pulled Corbin. F hale. F pitch counts. F hale. F hale f hale f hale. Blue cans. F hale. F chas roberts. F hale. Boooooooooooooo. Hales baseball scripts is defunct. Hale is a ball boy at best. F hale.
Remember when hen we had a four run lead? Kill me. LEAVE THE FING STARTING PITCHER IN FFS. HAVE WE NOT LEARNED IN TWO MONTHS? HALE KILL YOURSELF. KILL YOURSELF. FFFFFFFFFFFFFFFFFFFFFFFFFFFFFFFFFFFFfffffffffFFFF FFFFFFFFCC CCCFFFFTYYYhfgjdtymdutdm ytdmytdkytdkyrdkryx.
Smoke break. You know what? F the announcers too. F the crowd for cheering at a single strike. Corbin would have done much better, less damage than out shiiiiiiitty bullpen. F u hale.

Y'know those archaeologists, who came across a fragment of an ancient scroll, written in a strange foreign language that is almost entirely unlike English, but just enough to trigger echoes of understanding? That's what proof-reading the above was like. Kinda. Mind you, given the overall feeling tonight was that the D-backs were playing a game almost entirely unlike baseball...

Not much more to add. This was a brutal loss. The D-backs Twitter feed informed us before the game the team were 19-1 when leading after six. Guess that's 19-2 now. Good to see Ahmed falling a triple short of the cycle, and Goldie got on base four times, but when it takes you four pitchers to get through an inning, there's clearly something wrong. Our home record sinks to 10-23; the Braves won their seventh at home today. That's how bad this team has been at Chase Field. And O'Brien? 0-for-4 with three punch-outs; the trio of K's took a total of nine pitches. 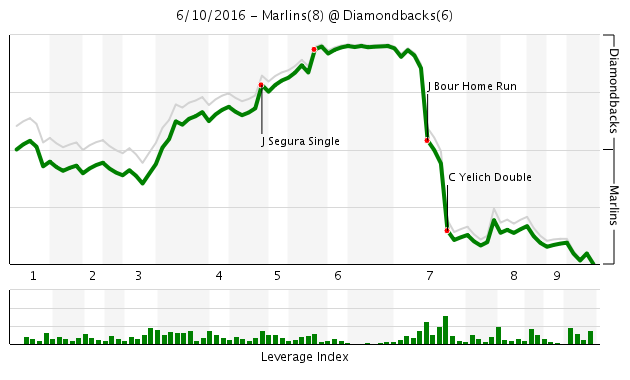 Clippard is not the guy who should be coming on here

I’d rather see Curtis, but much rather see Ziegler. Clippard is a fly ball pitcher, and a double play is needed.

Welp. We'll try and do better tomorrow, when we see Zack Godley for the first time this season, as he takes on Jose Fernandez. No way that can possibly go horribly wrong.