There was a sharp, and understandable, down-turn in fan confidence in the poll which we took at the start of May. Will that persist into June?

How long ago that unstoppable spring for the Diamondbacks seems. A tough April schedule proved every bit as hard as expected, but was then followed by what should have been an easier slate of games in May - only for Arizona to have a record that was two games worse, going only 11-17. But before we get to that, let's take a look at how fandom saw the situation at the beginning of May.

That's an almost complete reversal of the confidence standings to that point. Through Opening Day, we had little more than 10% voting five or lower. But after the first month's games, with wobbles of Zack Greinke and Shelby Miller, the number voting 1-5 had ballooned to more than three-quarters of those who took part, at 76%. The ten percent outliers were now the ones voting seven or above - the same scores where almost exactly the same 76% figure were found at the start of April. Naturally, this has led to a drastic collapse in the overall confidence number: after cracking seven around Opening Day, it imploded by more than three points to just 4.05 at the beginning of May. 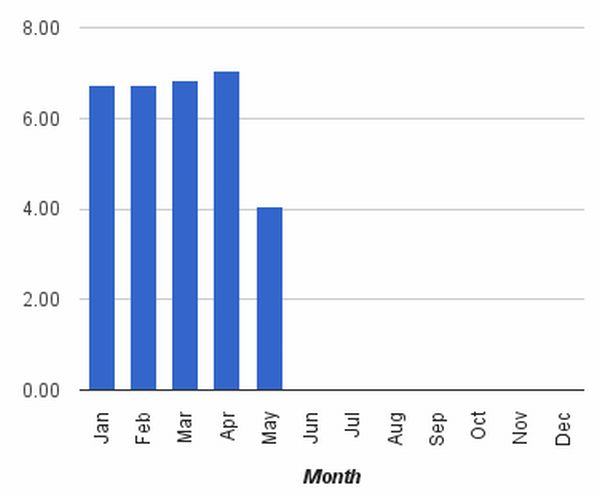 I don't think this can be classed as any kind of surprise. The negative votes were fairly well spread-out however, with no number getting more than the 21% obtained by a vote of five. Below that, one, three and four all received almost identical amounts of votes. Two, for some reason, was much less popular: perhaps people figured that if they were going low, they might as well damn it and go all the way to one. The biggest drop was at eight, which went from more than one-quarter, to less than one percent. Even nine held on better, with some true die-hards still professing extreme confidence in the team's fortunes. Wonder if that will remain the case now? Below, find the full breakdown for each month to date. 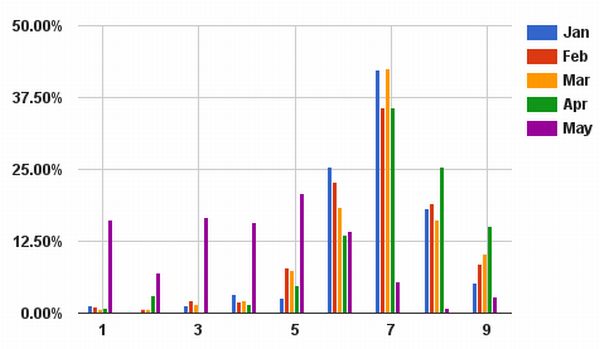 As noted, the month just finished should have been a chance to make up ground, but the team didn't do so, dropping further off the pace, ending the month with another losing home-stand, and dropping six of the final eight games. That's not exactly calculated to inspire confidence, and I suspect we're going to see another drop in the index when we look at the results, this time next month. But how far? Vote below and, as ever, give us your reasons in the comments.