What does history say about teams that start 13-18?

31 games in, let's look at the past record and see how teams matching Arizona's current mark of 13-18 have done.

Share All sharing options for: What does history say about teams that start 13-18?

To be blunt, it's not cause for optimism. Of course, this is not to say that there's no point going forward, because there are always exceptions to the rule, and as we'll see, there are some teams who have started 13-18, that have still gone on to significant success. But "exceptions" would be the word: history is not in the Diamondbacks' favor. From 1998 through the end of 2015, we find 53 teams that have begun the year by winning 13 of the first 31 games, as Arizona has done this season. 70% of those (37) ended the year with a losing record, and only 13% saw post-season baseball that same campaign.

The median record of all such franchises was 75 wins, and the mean was 76-86, the latter meaning the teams in question also played below .500 the rest of the way, going 63-68. But that covered a wide range of outcomes, as you'd expect. The best season was 96 total wins, put up by the 2006 Twins and 2011 Brewers - even if the latter deserves a significant, FedEx-sized asterisk beside it. The worst... Welp. You probably don't want to know. Because it happened the last time the Diamondbacks went 13-18: this was in 2004, and Richie Sexson had recently gone on the disabled list. The team went 38-93 from then on, so if you thought things couldn't get any worse...

The chart below shows the breakdown of results for all the 13-18 teams, grouped together into blocks of four wins. 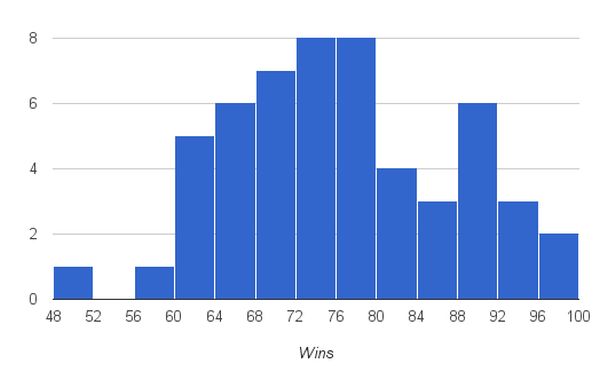 To some extent, this dampened outlook makes sense. For the Diamondbacks now to finish above .500, we would need to go 69-62 the rest of the way, which is the equivalent of an 85-77 season. The road to 90 wins, where we initially projected the cut-off line for the post-season, would now require a 77-54 record going forward, and that winning percentage works out at a 95-win full season. However, the good news is, the bar to get out of the NL West looks likely to be lower than ninety wins; right now, the division-leading San Francisco Giants are on pace for less than 84 wins (83.6, to be precise).

Between that and the relatively recent addition of a second wild-card spot, the slow start is less doomworthy for Arizona than in the past - such as for the 2005 Indians, who recovered from their 13-18 beginning, to end up with 93 wins and still didn't make the post-season. If we repeat both elements, I'll frankly be astonished. But I doubt anyone on the team is under any illusions that this start - in particular, the series against the Rockies and Marlins - is not what we wanted. Still, if we'd split those six games, we'd be tied for first in the West. We just have to hope that wasn't our opportunity for the year; playing better going forward has apparently become close to essential.

Editor's Note: New players win cash in their first league or get their entry fee refunded! Offered in partnership with FanDuel.