It's odd to talk about "must win" games not even 20% of the way into the season, but this was probably as close to being one as we'll see for quite a while.

This was strange to watch. I've always been a Diamondbacks' fan, rather than a particular player - I support the name on the front, rather than the one on the back. So, previously, when players have left, they've been dead to me. A "You're either with us or against us" kinda thing. But tonight's Greinke-Blair match-up was different, for a variety of reasons - even beyond not having Zack Greinke's dad as a member! We've only had a month or so with Greinke, a hired gun brought in over the winter, whose love for the team, one suspects, is largely inspired by the name printed on his checks. We had two and a half years of following Aaron Blair from draft selection until trade to the Brave, his departure not in his control.

On the other hand, the smug "told you sos" from the nattering nabobs of negativity who crucified the Diamondbacks for making the trade, had Blair beaten Greinke, would have been painful to endure. Hey, I didn't think it was that great a trade at the time, but it's one of things about being a fan; by association, we carried out those trades ourselves, and feel obligated to defend them, at least somewhat. Which is really dumb when you think of it, because I doubt many people out there select sports teams based on the front-office philosophy, let alone changing their loyalties as a result of a new GM. Instead, it's "my franchise, right or wrong."

Which brings us to tonight's game. Normally, and especially given our woeful play over the past week, I'd celebrate the Diamondbacks taking a three-run lead by the middle of the third. But tonight, the happiness was kinda muted, it coming at the expense of Blair. Got to feel for him, not least because... well, to be blunt, you can see why the Braves are currently on course for north of 120 losses this season. Our first run came after an Atlanta outfielder Trumbo'd a fly ball into a double for Chris Owings. The second, after they picked Paul Goldschmidt off, only for him to end up safe on second. And the third scored when a three-base error by the 3B scored David Peralta - despite the ball also beating him home by 30 feet, as shown below. Windmill Williams got very lucky the ball skittered away.

The Barves' [sic] hitters weren't doing much better, and for the first time since we got him, Greinke looked like a true ace early on, at one point striking out five consecutive Atlanta hitters. His seventh K of the night, ended the fourth inning and got A.J. Pierzynski tossed from the game. for flapping his gums at the home-plate umpire. Always a pleasure, A.J... But the D-backs were not averse to the gaffe game favored by the Braves: Jake Lamb and David Peralta both lined into double-plays in consecutive innings (the third and fourth). Jean Segura was caught too far off first, and Paul Goldschmidt clearly thought the ball was not going to be caught, respectively.

Aaron Blair left the game after five, replaced by a pinch-hitter in the bottom of the inning. He had allowed three runs (two earned) on five hits, but had some control issues - Blair walked four and the only strikeout was the last man he faced, Welington Castillo. After he'd gone, it didn't take long for the D-backs to add on: two pitches from Jim Johnston, and Brandon Drury had notched his sixth home-run of the season, with a line-drive shot to left-field. That left the Diamondbacks teetering on the edge of tacos for the first time since the opening game of the series against the Cardinals. Could they satisfy the hungry masses?

There was some more ugliness to get through first. A leadoff single was followed by a wild pick-off from Greinke, and another single put runners on the corners for Atlanta, still with no-one out. A potential double-play ball went to Lamb, but he forgot you had to catch the ball before starting the double-play, and it became an infield RBI single. Fortunately, another double-play ball followed, but a walk and another infield single brought another Braves tally, as Zack was clearly running out of gas. A hard-hit liner to center allowed him to escape in the end: his final line was six innings of two-run ball, allowing seven hits and one walk, with eight strikeouts.

Highlight of the seventh was a hellacious bit of defending from both Castillo and Nick Ahmed. A lead-off single tried to advance on a ball in the dirt, but somehow, Beef managed to get a throw off in the direction of short, which Ahmed, equally inexplicably, managed to snag and apply the tag on the runner while doing something resembling the splits. For some reason, I can't add any pics to this recap, so look, just go and watch the highlight, will ya? It'll make a LOT more sense than any description. But it has gone onto my list for 'Play of the Year' candidates, that's for sure.

Arizona added the fifth and taco-friendly run in the eighth, as David Peralta singled, his third hit of the night, and Castillo then doubled. After Brandon Drury grounded out too sharply to third, and Owings was intentionally walked, Phil Gosselin - another, in a parade of former Atlanta players - brought the run home with a sacrifice fly. But the win wasn't yet secure: Tyler Clippard had worked a scoreless seventh, however, Daniel Hudson brought the tying run to the plate for the Braves with one out in the eighth, then got a ground-ball to Ahmed who... Well, I needn't even bother with a description of what followed, need I?

Two more runs were added by the Diamondbacks in the top of the ninth, Castillo banging the ball through the left-side of the infield to score Segura and Lamb, and Brad Ziegler worked a scoreless ninth in a non-save situation, with the help of a nice sliding catch from Peralta for the final out. Peralta ended with three hits, Owings reached base three times on a hit and two walks, and Castillo had a pair of hits. The Dodgers lost, and are back below .500, but one of the Giants and Rockies has to win, since they're playing each other, so we'll remain three games back of whichever one is victorious. 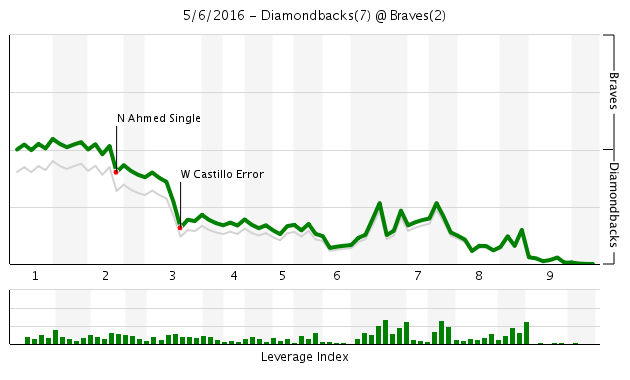 Someone will score a run this game

And, hey - whaddya know! He was right! We'll reconvene tomorrow, and try to start a streak of the good kind. But before you all get too excited - it's a Shelby Miller start. Guess that preview just about writes itself as well...