Another Dog Day at Chase - they had the roof closed this time - and Archie Bradley picked up the W with a much more solid outing, to give Arizona their third series out of four.

It was nice to see the Diamondbacks' offense show up on time at the ballpark. Before yesterday, Arizona had been outscored every inning from the first through the fifth. But after pounding the Padres to the tune of 13-2 in the first two frames on Saturday and Sunday, we have a positive run differential in both those. Still some work to do in the third and fourth - particularly the latter, which has been the "Inning of Sinning", with the team having scored only sixteen times to date there, while conceding no fewer than forty. However, it certainly takes a good bit of strain out of the game when you have a big-lead early even if, as yesterday showed, no lead is ever guaranteed.

It seemed important for Archie Bradley to get off to a good start: he certainly delivered, retiring the Padres in order in the top of the first, including a pair of strikeouts. And the offense immediately got to work. Phil Gosselin walked with one out, went to third on a Paul Goldschmidt single, and Brandon Drury was just able to let it up the first-base line and stay out of a double-play on his RBI groundout. The Padres came back quickly, getting a lead-off double against Bradley that came around to score on a one-out single, before Archie buckled down and retired the next two, keeping the game tied.

Didn't stay that way for long, courtesy of Chris Owings's second home-run of the year which, unlike the one taken away last night, didn't require any review this time. The pattern then followed the first inning for a bit, Chris Herrman walked and went over third on a single by Nick Ahmed. That brought Bradley up, who executed a safety squeeze to perfection, successfully confusing the Padres' infield as to whether or not to try for the out at home, and they ended up getting nobody at all. A wild pitch set up Gosselin for an RBI groundout, and Paul Goldschmidt had a multi-hit game by the second inning, with a two-run double to the outfield fence, making it 6-1 for Arizona.

As last night, the offense then seemed to sit back on their heels after the early surge - the D-backs didn't get another hit until the sixth inning. But it was enough, for Bradley was pitching very effectively this afternoon: he was locating his fastball and that allowed his slow curve to be that much more devastating. He retired 14 of 15 at one point, the only blip being a solo home-run for the Padres, leading off the fifth inning. He was efficient too, in a way Robbie Ray could only dream off - from the fourth through the seventh innings, Bradley didn't need any more than ten pitches for any frame.

He worked into the eighth, got a lead-off strikeout, then was lifted after his first walk of the day. He ended with a line of 7.1 innings pitched - that's four more outs than Shelby Miller had managed in any start this season - four hits and one walk, with a career high nine strikeouts. He needed only 96 pitches, 70 of them for strikes. Daniel Hudson did allow the runner he inherited to score, and it could have been more wobbly but for Goldschmidt bailing out Gosselin with a sweep tag on an airmailed throw. However, further damage was averted, and Brad Ziegler, this time appearing in an actual save situation, put up the expected zero, albeit after hitting the first batter he face.

The sides combined for 25 strikeouts today. 14 of those were by the Diamondbacks, but they did walk five times, while the Padres' hitters had a K:BB ratio of 11:1. Jean Segura, Goldschmidt and Nick Ahmed each had two-hit games, Ahmed also stealing a base, and Herrmann reached base three times on a triple and two walks. Good to see Goldie getting more hits: while his 257 average is still low, since April 12 it has only been higher than that for one day (.261 on April 24). If small steps, over his last 11 games, Goldschmidt is hitting .389 (14-for-36); the good news is, he's also still walking (K:BB ratio of 10:8) and being productive (11 RBI). Long may it continue. 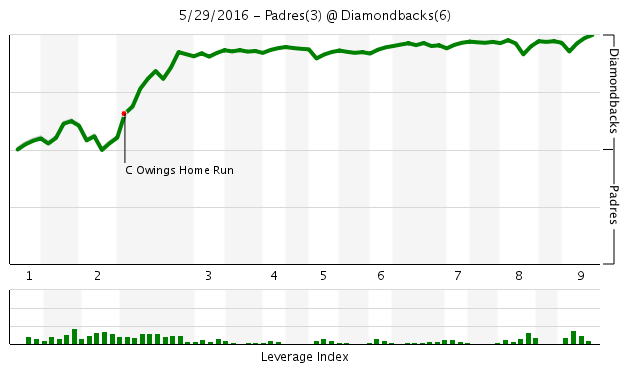 go out driving later and you’ll see the other 4…..

Boycotting Taco Time for the 2016 DBacks season, since Tucson Taco Bell Owners are not honoring the promotion.

He's not wrong. Be careful out there, folks, both tonight and tomorrow. Speaking of tomorrow, that will bring another fresh face to the rotation, in Edwin Escobar, who'll be making his Diamondbacks' debut as we host the Astros, to begin a quick home-and-road series against them, with two games in each location. Since it's Memorial Day, it's another afternoon one, with the first pitch at 1:10pm. That's the pattern this week: with a series in Houston and day games against the Cubs, there's only one contest later than that through next Sunday. Set your alarm clocks, folks!