For the guest recap this week, we turn to the woman who has put up with more SnakePit stuff than any other over the past 11 years: Mrs. SnakePit.

Share All sharing options for: Diamondbacks 8, Padres 7: The Thoughts Of Chairwoman Mrs. SnakePit

What follows is a loose transcript of various conversations between Jim [in italics] and Mrs. SnakePit over the course of this evening's game. If you're looking for a detailed breakdown of events, look elsewhere, because between the second inning, when the D-backs were 7-1 up, and the ninth, when the Padres had the tying run on base, it was pretty low key. There may have been tequila involved, to loosen her tongue. We joined the game, thankfully, after the D-backs had already erased an early lead, because we were buying said tequila.

2nd inning: Zack Greinke at the plate
How much money does he make? A million dollars a game? He should be able to play every position well. [Gets a hit] There you go. That's the way it should be. People who are making that kind of money? Really. He'd better not start having kids. Does he even have kids?

Nick Ahmed bunting
Who's this guy? Oh, okay. We love him. Because he's a ballplayer. He's especially good at being a shortstop. He reminds me of Goldschmidt. Y'know, before he started having kids. He's constantly working hard, making the pitcher work. [And he walks] And it works to his benefit. That's a ballplayer. I'm quoting Mark Grace here.

5-1 Diamondbacks
And that's the way it should be. All the time. [Goldschmidt to the plate]He's got two kids now. And his batting average has gone down by quite a bit. [Hits a home run; 7-1 Diamondbacks] He looks very surprised. I'm still not comfortable with that lead. We've seen it too many time: they get comfortable, and the other team comes back. They should play just as hard throughout the nine innings.

What did you think of Zack Grienke that inning?
I didn't actually see any of it. [It was a very quick inning] But if he can only allow one run, that's good. It's a lot better than last night. He's pitching and he's batting. Cats. They just don't care. [Hey, just because they're 7-1 ahead... You need to recap just as hard throughout the nine innings. And not surf videos on Facebook] Um, we have really good infielders. Is that guy a pitcher? [Solarte? He's a switch-hitter] That's pretty cool. Why isn't he a Diamondback? I'll tell you why he's not a Diamondback. Because $30 million of his money is being paid to Zack Greinke.

Segura almost gets hit in the head
I sense a brawl happening. No, I think Segura is acting like a soccer player, like a big actor. That should have been a ball. Even if it did hit the bat. It knocked the player down. Still, I think replay is necessary. They should take the little box [the strikezone] and give that to the umpires too. The reviews keep everyone honest. Now, he should hit it out of the park. See the way he runs? That's the way they should all run. As if their life depended on it.

Tell me about the Chase Field situation.
The Diamondbacks want to move to Salt River Fields? I think they want everyone else to pay for everything. They should really get their game together. If they played really well and filled up the stadium, I could understand it. If the reservation wnats to pay for it, fine. They make all sort of money over there.

I still think they should make the players pay money when they screw up. It would sure as hell make them more careful about their game. Like when they bat wrong. When someone throws them a ball that's out of the strikezone and they swing at it. That's $100,000 right there. In the kitty. And the person that hits the grand-slam gets the kitty. Those guys would show up three hours early. When you're not playing, you should be practicing. You're getting paid hundreds of millions of dollars? You should be out there. every day. If you hit a batter, it shouldn't be "right, now we hit one of your batters." They should just get fined. You've got to look at it economically..

Castillo driving the bus. As it should be. The pitcher should give him some of the money. That's what's wrong with the game. There should be some kind of a limit. I mean, how many baseball players can they get for $34 million? It should be in their contract that if they screw up, they can be replaced by a player from college. They should have learned their lesson with Eric Byrnes - as soon as they start paying them a lot of money, they stop playing. These contracts should be rewritten. I don't think anyone is worth $34 million a year. They should spread that out a bit more.

Padres score three in the sixth
This is why I'm not comfortable with big leads. It's still not big enough. Greinke looks like he's done. He's throwing grapefruits. He looks like a cranky Greinke. [Segura throws out a runner at home] Very well played. I don't have any problem with the defense for the Diamondbacks, between Ahmed and Goldy, they play very well as a team. It's the pitching and hitting which needs work. If the fielders can play so well, why can't the pitcher and hitters be just as good? [So what would you do?] Fine them.

The ninth inning.
See? I told you so. 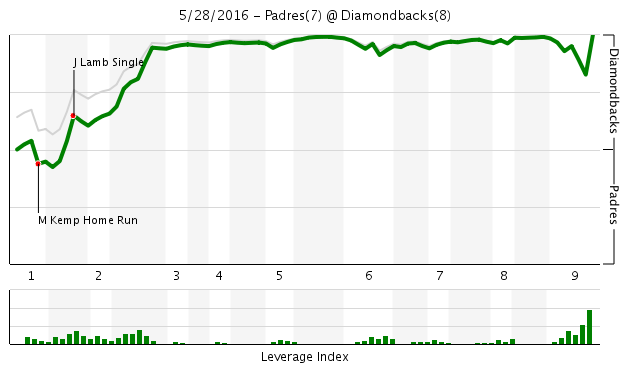 I'm still not comfortable with that lead. We've seen it too many time: they get comfortable, and the other team comes back.

Wise words, indeed... So, it's the rubber game on Sunday, and the team has already made a roster move:

Should I stay up and write about that move in detail, wondering what possibly could be coming tomorrow? I mean, if it's anything but Archie Bradley, I'll be astonished, which makes me wonder why they are apparently not announcing it. Oh, well. We'll see tomorrow...