Will there be any carry forward from the multiple hit batters in yesterday's game?

After last night's series of unfortunate events, this evening's contest in Pittsburgh takes on an additional dramatic component. If things had ended last night, following the (maybe, maybe not retaliatory) jersey-grazing of David Freese, I doubt anyone much would notice. But after that, the Pirates' Arquimedes Caminero then went and hit a second Diamondbacks' batter in the head, taking Nick Ahmed out of the game, after already having done the same to Jean Segura. Since we had no bench players left, we ended up having to use Patrick Corbin as a pinch-runner. Segura ended up being taken to hospital but there has been no roster move, so hopefully, he's OK.

Let's be clear: I don't think either was intentional. But it's idiotic to claim that absolves Pittsburgh of responsibility: "I didn't mean to do it!" stops working as an excuse at age 9, and certainly does not work as a "Get Out of Jail Free" card for potentially lethal behavior. The Pirates have, as we've seen, a long pattern of "pitching inside", which has kept them at or near the very top of the league in hitting opposing batters for the past three seasons. It's like a habitual drunk who insists on driving home every night, and while the commissioner's office ignores the issue, I've absolutely no problem if teams remind Pittsburgh, that their dangerous actions have consequences.

There's evidence to suggest this may already be happening. I noticed that the Pirates have also been at or near the top of the league for hit batters at the plate, as well as on the mound. Is there a correlation between the number of times a team hits the opposition, and the number of times they themselves are hit? To see if that's the case, I looked at five full seasons (2011-2015) of data; below, you'll see a chart plotting HBP for and against every team in the majors each year. 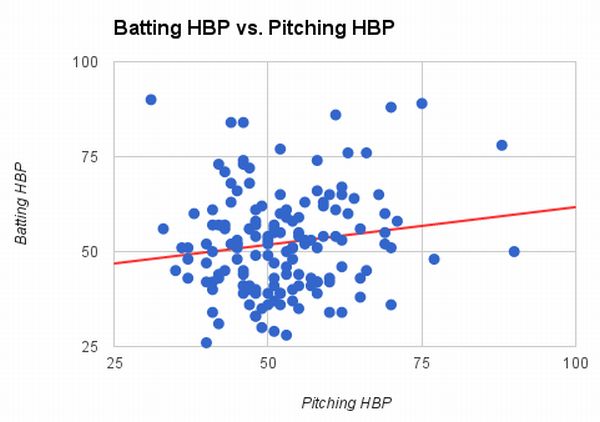 There is a weak correlation between the numbers, around 0.15. The formula for the trend line in red somewhat reflects a connection too: the number of times a team will be hit is 41.9 + (0.198 x the number of batters they hit). Put another way, about every five batters a team hits will result in one of their own being plunked. Which makes sense: the great majority of hit batters are not deliberate or seen as worthy of retaliation. But will that hold true this evening in Pittsburgh? We can only wait and see.