The Arizona Diamondbacks' Road to 90 Wins: May update

How are the D-backs going in their quest to reach the post-season? Y'know, beyond the obvious and stuff.

Share All sharing options for: The Arizona Diamondbacks' Road to 90 Wins: May update

May was supposed to be an easier month on the schedule. Hasn't shown that way in results so far, has it? Indeed, the win percentage this month of .450 is fractionally lower than the one we put up in April of .462. Those six-game and five-game losing streaks will tend to do that, even if sandwiched around a five-game winning run. We're 9-11 with eight games left to play, and need a 5-3 record to reach a .500 mark for the month, which would seem like the absolute minimum we need to minimize the amount lost off the pace this month. With five of those games at home against cellar-dwellers San Diego and Houston, that's certainly doable.

Since the last update, I did consider adjusting the goal down from 90 wins. At the end of April, everyone in the NL West was under .500. Even assuming the leader at that point played 90-win baseball for the rest of the season, they would still have ended the year at 88 wins. However, since then,the Giants have gone 15-6, and are on pace to win 95. The bar for the post-season is currently the 92 wins by the Phillies, but there's a good case to be made that neither they nor the Giants are sustainable. By Pythag, they are the "luckiest" teams in the league, at +7 (!) and +3 wins respectively. So, all told, leaving the mark at 90 seems reasonable

The chart below shows how the team has done so far. There are three lines, two of which are quite easy to explain. The blue is the actual number of AZ wins. The orange is a straight line to 90 wins at the end of the season - win five games in every nine. The red one is a more complex path, based on the schedule analysis I did before the season. There, I worked out, based on pre-season projections of each team's W-L record and home advantage, the chance of us winning each game. Add all those up and it's a projected win total, then scale it to reach 90 by season's end, and you get a path that takes into account the schedule. 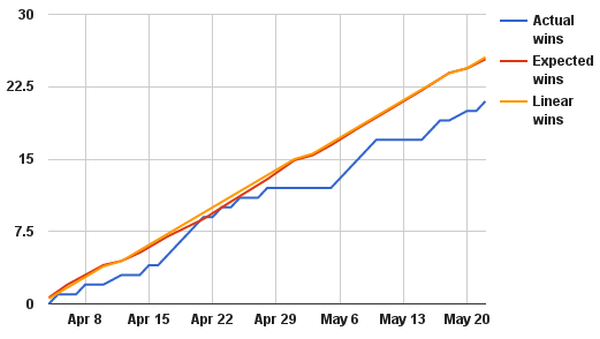 You can see how things have gone. After winning the first game of the series at home against the Cardinals, we were right there - needed schedule wins = 11.2, actual wins = 11. But being swept at home by the Rockies was particularly brutal, in a series where we were projected for 1.77 wins, and then on the road by the Marlins (1.39 Expected Wins) compounded the problem. Then sweeping the Braves (1.59 EW) helped, but the home sweep in a four-game set to the Giants (2.02 EW) set the team right back again. While taking the Cardinals' series (1.28 EW) was useful, there's still significant work to do.

Right now, we're 4.4 off the schedule pace, 4.6 behind the linear one - that schedule and linear are back almost to being even, indicates that May should indeed have been easier for the team. But if we can take two of three in Pitsburgh (1.32 EW), then hammer the Padres (1.76 EW) and Astros (1.02) back at Chase - yeah, winning any series at home is a big "if", I know! - that'll help. The expected win tally for those series, taking the D-backs through the end of May, is 4.1, so going 6-2 to finish the month would put a significant dent in the deficit. It won't be easy, but we're going to need to start gaining ground; San Diego and Houston seem like good candidates.