So, anything planned for the rest of your Saturday?

You could pretty much tick off the boxes in this game - as long as you were sticking to the column marked "Very dissastisfied." Inefficient starting pitching? Check. Sloppy defense costing the team? Check? Unproductive hitting, until it was too late? Bad relief work? Check and check. This seems a nasty habit of the team, to suck whenever they get any kind of nationally-televised showcase. Mind you, given the Fox Sports One announcers seemed woefully ignorant of the role teal played in both team and state history, I can honest say I am particularly looking forward to the return of Brenly and Berthiaume tomorrow afternoon.

To the game. I don't like to say, "I told you so," but the efficiency struggles of Robbie Ray continue. It took him 77 pitches to get through just three innings this afternoon, with his quickest inning a 23-pitch third. He loaded the bases in the first before striking out Randall Grichuk, although he wasn't helped by his defense in the second. The lead-off hitter reached base after Jake Lamb clanked what should have been a routine play, moving to his left and in front of Jean Segura. For the shift was on, and Lamb was actually between second and first bases; I'd be curious to know if there has been any study done on whether the shift leads to more errors.

The error immediately came back to haunt the Diamondbacks, as the next batter cranked a two-run homer into the left-field bleachers, giving the Cardinals a lead they would never relinquish. Ray then retired the next three, but the at-bat of Matt Carpenter exemplified the issue here. Two looking strikes got Ray 0-2 quickly, but it then took six further pitches - all of them strikes! - before Carpenter grounded out on the 8th pitch. Two more base-runners reached in the third inning, and any chance of Ray repeating his last start, which went seven innings, were dust in the wind.

He was slightly more efficient thereafter, but still left after five frames, having thrown 102 pitches. That's an average of 4.4 per plate-appearance today, so he's likely to move up from his fifth-place ranking in the NL coming into this afternoon. He allowed only three hits and one earned run, striking out seven, but walked four. Indeed, it was an inefficient day all round. The three relief innings thrown by Jake Barrett, Andrew Chafin and Zac Curtis were even worse than Ray, requiring a total of 79 pitches. The final tally of 181 pitches needed, hasn't been surpassed for an 8-inning performance by Arizona since June 2013.

However, in the bullpen's case, it wasn't just inefficiency, it was also bad results, as the Cardinals teed off in those three frames for seven hits, two walks and four runs. Chafin was the main victim, giving up three runs on four hits and his season ERA is now up to 6.46. Considering how great he was last year, I'm gritting my teeth and muttering something about reliever volatility; meanwhile, fellow left-handed reliever Zac Curtis posted his eighth consecutive scoreless appearance to start his major-league career. Though he has a long way to go to set the team record, currently at 19 by Joe Paterson in 2011. Something something reliever volatility there too.

Meanwhile, Mike Leake (did you know, he went to ASU) was being the very opposite of Ray-esque: not striking many out (only three of the 26 batters faced, and Ray was one of those), but being fiendishly efficient: he took just 91 pitches to get through seven innings, which is about the number Ray needed for four frames. While he has certainly not been lights-out this year (even with this outing, his ERA is still north of four), it's interesting to speculate on an alternate history timeline where we signed him instead of Zack Greinke, as we were apparently "close" to doing in early December last year.

Part of the problem today was timing: it felt like every base-runner we got before the ninth was with two outs. The exception was in the fifth, where Welington Castillo doubled with out out. After Chris Owing took strike three, Nick Ahmed singled to center, and Windmill Williams must have sprung a cog or something, for he held Castillo up at third, even though the pitcher was up. I was thinking that was because he knew we would be pinch-hitting for Ray, but that wasn't the case: instead, the pitcher batted for himself, and grounded weakly out to the infield, ending our best chance of getting back into this, with the score only 2-0 at that point.

Trailing by six in the ninth, things looked bleak, but the Diamondbacks perhaps got momentum with a late rally, as the Cards did last night. Paul Goldschmidt struck out, but Jake Lamb singled and Rickie Weeks' Jr got his first home-run as a Diamondback, to make it 6-2. After a Castillo groundout, home closer Trevor Rosenthal entered full-on meltdown mode, two singles and a walk loading the bases and bringing the tying run unexpectedly to the plate, in Jean Segura. He got ahead in the count 2-1, but was clearly out-thought, swinging and missing at a pair of breaking balls to end the game. The breeze of that sigh of relief from St. Louis should reach Phoenix soon. 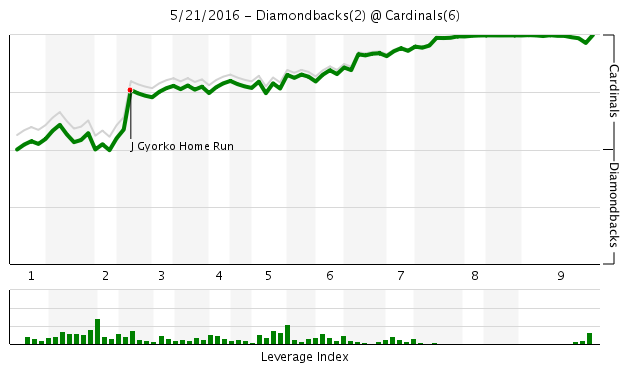 It helps when you hire

IT guys to hack into opposing teams servers.

Remind me to change my password... Anyway, another shot at our first series win in St. Louis of SnakePit history tomorrow, though we'll certainly have to play better. Zack Greinke goes for us, and the first pitch is 11:15am, Arizona time.