In the 3rd meeting of these two titans of baseball mythology, we waited in trepidation, would Shelby Miller be better, would Nathan Eovaldi continue his hot hand... turns out, that both would be true, one more than the other....

Share All sharing options for: Diamondbacks 2, Yankees 4: Sweep or sleep

The game started off well for one team, not so much for the other... yet... Shelby did give up a dinger, eerily similar to what Hunter Pence did against us, stuck the bat out there and it did all of the work for Mr. Gardner, yet, after a couple of hard hit balls, was able to keep it from being one of those "Oh no, here we go again" innings.  Jean Segura came up and came up with a pool table shot that appeared to get the rubber, 2nd base and Didi Gregorious' right hand before being gloved and tossed in while Segura stood on 2nd base wondering if this was a harbinger to come. While two ground outs scored him later, it was one of those offensive performances that was frankly.... offensive.  End of the 1st, 2-1 bad guys.

Miller was seemingly in and out of trouble for the majority of his time out there, managing to keep the Yankees at bay until the 6th when he got tagged for another run, but he went five plus, scattered 10 hits and a couple of walks and essentially kept the team in the game.  All in all, an improvement, especially when compared to the majority of his starts this year.

Now as for the DBacks... you can look at either side of the coin... either, we were incredibly woeful and outmatched or we caught a hot pitcher who had excellent command of his stuff.  Based on his results over the last two weeks, I would say its the latter.  Given our struggles hitting in our own park, you could certainly pick the other side of the coin and there would every reason for doing so.....

The efforts put for by Mssrs. Chafin, Barret and Curtis were appreciated, they kept it from getting any worse and our faith was rewarded when Chris Owings went deep on Andrew Miller for his first dinger of the year.  Then Miller was reminded by his catcher that he has an awesome breaking pitch and proceeded to make the next three batters look foolish.

Then Evan Marshall came in and quietly laid those hopes and dreams of a comeback to rest with a less than stellar effort that ultimately allowed another run in on a wild pitch (how wild was it? It was behind the batter by a good foot and a half, yeesh) 4-2 Yanks.

In return, we graduated from Miller to Chapman, who retired Gosselin on strikes (not wholly unexpected), got Goldy out on a line drive to right field (good play by Hicks, but encouraging to see Goldy go oppo field again) and Yasmany Tomas... he made contact and the Yankees made the play.

Was this loss, unexpected... not really, but considering how the unexpected has reared its head lately, it would have been nice for the baseball deities to have tossed us a bone, alas, it was not to be...

Now we get a day to reflect on our past transgressions before we take our baseball revival on the road and attempt to convert those pagans in Missouri to the ways of the snake. Bells and whistles to follow from the powers that be... 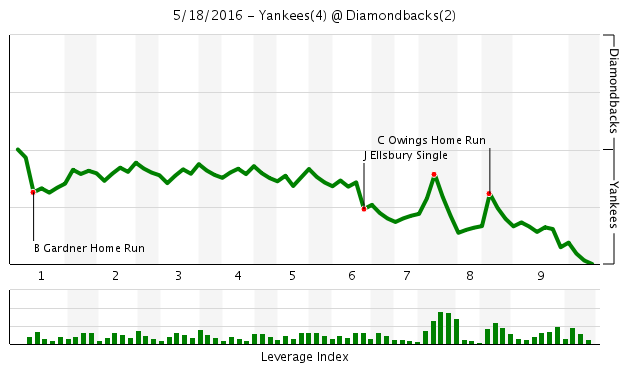 It's off to St. Louis for the D-backs now, though they have an off-day tomorrow, before the series starts on Friday - with Rubby De La Rosa being skipped, that means it's Robbie Ray against Carlos Martinez.