It was an all-around disappointing effort, for players, coaches, fans, and even dogs. Possibly, the front office will finally be disappointed in failure.

Perhaps fans of the Arizona Diamondbacks should have been concerned when it seemed like more of the hype heading into the game was about the attempt to set a world record for most dogs attending a sporting event than about the sporting event itself. Surely, this means I am simply out of touch with the times, but I actually think the focus of a baseball game should be the game. I can only assume that the failure to set the record will lead to louder attempts to set the record at the next opportunity.

Things started promisingly enough. Shelby Miller worked three hitless innings, and a first-inning home run by Brandon Drury put the Diamondbacks up 1-0. The Diamondbacks continued to have chances against Chad Bettis, but failed to capitalize, and Miller fell apart completely in the fourth inning (the second time in three starts he has done so.) Miller left trailing 3-1. Gerardo Parra made it 4-1 with a solo shot to the pool in the fifth, and after an attempted comeback fell short, Randall Delgado (left in, inexplicably, for a second inning of work despite having thrown 20 pitches and having Andrew Chafin ready in the bullpen) served up a two run shot to Nolan Arenado to make it 6-3.

My mamma taught me I shouldn't be negative all the time, so here were the positives: first, the offense was successful at getting hits. The Diamondbacks actually outhit the Rockies, 11-7. Brandon Drury picked up three hits, and Phil Gosselin, Yasmany Tomas, and Chris Herrmann each picked up two. Unfortunately, the only time the D-backs were able to string hits together was in the sixth inning, when Drury led off with a single, and Peralta added a single of his own after Goldy struck out. Tomas singled off of Story's glove to make it 4-2, and leave two on for Herrmann. Herrmann singled past a diving Arenado to make it 4-3. Unfortunately, that was all that could be managed, as Owings grounded out and Ahmed flied out to end the threat.

Unfortunately, the bad far outweighed the good. First, the dog scenario. While I'm not necessarily a fan of dogs at the ballpark, apparently it was too hot, and while some customers were fine with being moved, others weren't. I'd stick to baseball, but come on, the baseball was too depressing, and given the quality of the on-field product, and the amount of hype given to off-field concerns by this front office, I'm thinking they probably care more about the fact that their dog days were somewhat a failure than they do that the team lost (and got swept) by a team that, on paper, should be one of the worst in baseball. This dog record attempt was just something else where the Diamondbacks tried to hype their way to success but wound up falling short.

@Dbacks thanks for the worst game ever. Dogs in the sun. Moved 3 times Never coming back @PetSmart @MLB @DHallDbacks

On the field, now. Shelby Miller was exactly the same pitcher we have seen most of the year. Once again, he exposed the bullpen, and the fact that General Manager Dave Stewart fails to realize the need for a long reliever. Chip Hale compounded this problem by sticking with Delgado longer than he should have, and the results were outlined above. While the number of hits was impressive, the seventh inning highlighted the problems. Rickie Weeks Jr. led off with a single, followed by a single and error by Gosselin putting runners on second and third with no one out. Instead of capitalizing on this opportunity and getting back in the game, the Rockies used their bullpen wisely and struck out the side around a strategic walk to Goldy. While Walt Weiss was far from perfect in managing his pitching staff (leaving Bettis out to start the seventh likely caused most of the problems) he did a far better job of it than did Chip Hale.

The Diamondbacks are now 5-12 at home. That's going to be tough to hype away. Get the spin machine running so that there might be people in attendance for the next home series!

The bigger and more realistic question facing us fans is how to process what has been, on the whole, a pretty dismal failure so far. And I'd say this game summarizes the hope well. For the first third of the game, the Diamondbacks were winning, and Shelby Miller looked pretty good. We aren't even a fifth of the way into the season yet. A lot can happen. Certainly, things could get worse, but they could also get better. Everyone else in the division has been as bad relative to expectations, with the exception of the Rockies. And there are 71 road games remaining and only 64 home games, which given early results should help. There is plenty of time for Chip Hale to right the ship, for Dave Stewart to learn from his mistakes so far in roster construction, for at least Zack Greinke, if not Shelby Miller, to pitch like the guy we thought the team acquired, and for a run to the postseason to be made. The season is far from over.

Of course, a few more games like this one, and it will be. 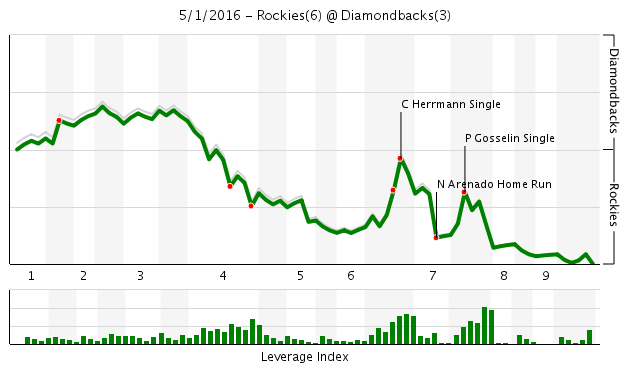 Team flies off to Florida this evening, then has an off-day tomorrow, before beginning a series against the Marlins on Tuesday, with Patrick Corbin taking the mound for Arizona.