Five home series into the season and the D-backs haven't won a single one. Yet, bizarrely, they finish April one-half game out of first-place in the National League West. #YouCantPredictBaseball

The bizarro world which is our division continues to perplex. With the first month of games now in the books, as the Dodgers just lost, every team in the National League West is below .500, with everyone bar the San Diego Padres within one-half game at the top of the standings. If this keeps up, we might see something like the 2005 season, where the Padres won the division with a record one whole game better than even. There's no arguing that the D-backs have problems: but I can pretty much guarantee you, that Dodgers and Giants fans are equally, if not more, concerned. Rockies fans, of course, are just happy to be at the party.

Tonight was at least a bounce-back outing, in a fairly significant way, for Zack Greinke, considering how badly he was mauled by these same Rockies' hitters on Opening Day. He started off by fanning the first two batters he faced, though it was a bit of an up and down struggle thereafter, with Colorado getting runners in scoring position every one of the first five innings. For example, they put the first two on in the top of the second, but Greinke got a bouncer back to the mound, and kicked off a double-play that helped escape the jam. However, he did finish strong, retiring the final seven batters faced, which took him through the end of the seventh.

The Rockies did damage Zack in the third. A lead-off single was followed by an RBI double from - inevitably - Trevor Story, who then came home on an RBI single from former Diamondback Gerardo Parra. Though I did appreciate the way Parra reminded us of his time her, by running into an out on the basepaths and ending that inning. However, those two runs were the only ones surrendered by Greinke, who was quietly efficient in taking 105 pitches for his seven innings. He gave up eight hits, walked two, but also struck out eight, tying his season high there, and most importantly, kept the ball in the park. For what it's worth, his ERA over the last four outings is an okay 3.90.

In this case, the offense were far bigger culprits. You won't win many games when the opposing starter one-hits you, or when you have three hits going into the bottom of the ninth inning. That's what the Diamondbacks did tonight, being consistently stymied by Chris Rusin from the very beginning - he struck out the side in the bottom of the first. The only hit Arizona managed off him was a lead-off single in the fourth for Paul Goldschmidt, who was erased one out later when Welington Castillo hit into a double-play. The only at-bat with a runner in scoring position through eight was Greinke, who grounded out with runners on the corners, ending the second.

But if you ever wanted an illustration of the baseball truism about "Anyone but [insert starting pitcher's name]", this game was a good one. Rusin left after five shutout innings - he'd only thrown 76 pitches, but this was his first start of the season, having spent the rest of it in the Colorado bullpen. The 2-0 lead he bequeathed to his former colleagues there, lasted... Exactly two batters. Jean Segura singled back up the middle, and then Brandon Drury turned on an inside pitch and completely obliterated it to left field, for his fourth home-run of the season, bringing the Diamondbacks back level.

At that point, I was hopeful we would be able to feast on the Rockies' bullpen, but there was no further scoring for us. Daniel Hudson wobbled his way to a scoreless eighth, not helped by his own throwing error, but stranded two men on base, and we turned to closer Brad Ziegler in a non-save situation for the ninth. It didn't go well. He got the first out on the first pitch, but the next five Colorado hitters all reached safely. The killer blow was - at the risk of repeating myself, inevitably - off the bat off Trevor Story, who seemed to be badly fooled by a full-count pitch, but somehow flicked it down the right-field line, where it bobbled around in the corner for a two-RBI triple.

Chip Hale finally had to go and get Ziegler, who had his worst outing in almost a year - he had a similar, one out, three earned run appearance against the Nationals last May 14. Instead, we got to see the major-league debut of Zac Curtis, called up from the majors just earlier today, and he did the necessary, facing one batter and retiring two, with a ground-ball double-play. Goldy singled to lead off the ninth, but any hope was rapidly extinguished by a Yasmany Tomas twin-killing, and even Welington Castllo's double off the center-field wall was pointless. Goldschmidt had two hits and Owings, inexplicably, a pair of walks. Well done, I guess... 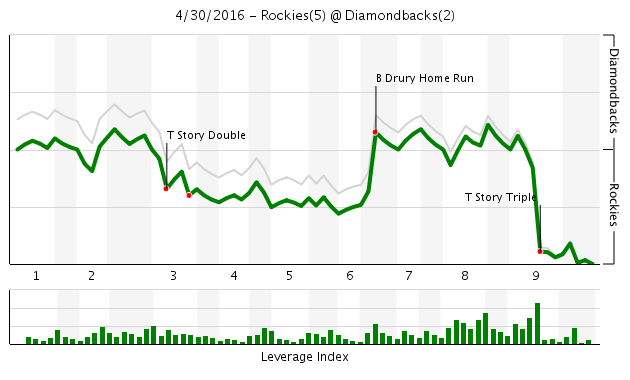 We'll try and avoid the sweep at home tomorrow, with Shelby Miller taking the mound. We got four scoreless innings from him last time, so is that reason to hope? We shall see. For the third consecutive day, if we win and the Giants and Dodgers lose, we'll have sole possession of first place. Dammit, if I keep mentioning it, surely it's got to happen, sooner or later, right?