You want small sample sizes? We got 'em. This team is 2-0 when wearing their home alternate teal with teal outline "A" cap.

It took a while, and looked more than a little ropey at certain points during proceedings, but the Arizona Diamondbacks finally got their first quality start of the season, avoiding becoming the first team in franchise history to go without one their first go-around of the rotation. Robbie Ray delivered six innings of two-run ball. That's the good news, and I think we'd all have settled for that, in comparison to the fondue-sized meltdowns seen from Zack Greinke, Shelby Miller and Rubby De La Rosa. However, it wasn't exactly all sunshine and kittens: Ray's outing would seem a good deal better if you, oh, popped out for a pizza during the third inning.

It had actually gone pretty well during the first couple of frames. Ray faced the minimum, courtesy of a double-play, and only needed 21 pitches to record those first six outs. There were even premature expressions of confidence in the Gameday Thread - how soon some apparently forget, that both Greinke and Miller posted zeroes in their first two frames as well. And so it proved, as in the third, Ray was apparently possessed by the departed spirit of Kyle Drabek, because Robbie suddenly couldn't find the strike-zone with a 60 feet, 6 inch funnel. Walk, walk, bunt, walk, walk, RBI groundout, and the Cubs had scored twice without a hit or getting the ball out of the infield.

It looked like Matt Buschmann might get his major-league debut, in the wake of another abbreviated outing by a D-back starter. However, Ray got Anthony Rizzo to fly out to right, and escaped after a 28-pitch inning - only ten of them being for strikes. But he wasn't out of the woods yet, putting two on with one out in the fourth, then men on the corners with no outs in the fifth - a big strikeout and even more rotund double-play (below - the old first to catcher to third to catcher to shortstop to right!) got Ray and Arizona off the hook in the latter. He finished with a 1-2-3 sixth, and a line of two runs on four hits and four walks with three strikeouts, though was still in line for the loss.

That was because the offense had been unable to handle Jason Hammel. The D-backs spurned an early chance after Jean Segura led off with a double, just missing a HR, and Socrates Brito followed with an infield single. But Paul Goldschmidt grounded out and David Peralta batted into an inning ending double-play. After that pair of knocks with no outs in the first, Arizona were no-hit until the sixth. In between, we seemed almost intent on giving it away. For example, Nick Ahmed got a lucky do-over after a pop foul hit one of the netting guy-wires; he subsequently walked, only to be out trying to go to far on a failed pickoff, making the final out in the fifth inning at third-base.

The Diamondbacks finally got on the board in the sixth. Segura singled to lead off, stole second, and after advancing to third on a Brito lineout, was driven in when Goldy rapped the ball back up the middle. The same trio then combined to tie things up the next time they came to the plate. Segura doubled, advanced on a Brito groundout this time, and scored our second run after Goldschmidt singled to center. However, Paul immediately committed a rare TOOTBLAN himself, trying to advance to second - I'll confess, I did wonder whether all these base-running gaffes might eventually prove costly for Arizona.

Meanwhile, the Arizona relief corps did its part, with the A-corps of Tyler Clippard, Daniel Hudson and Brad Ziegler putting together three innings of one-hit ball, with no walks and three strikeouts. That brought us to the bottom of the ninth, and the Cubs used a left-hander to retire David Peralta for the first out. They then went - and I can't believe I'm writing this - to Trevor Cahill in a high-leverage situation. Welington Castillo squeaked a nine-hopper through the hole at short, and was instantly replaced by pinch-runner Chris Owings. He reached second as Jake Lamb grounded out, bringing up Yasmany Tomas, who had looked poor earlier, going 0-for-3 with two K's...

Woo-hoo! This certainly counts as a robbery more than a victory, but winning one when you don't actually play well is a sign of...well, something. I guess it needs to be teal every day, for the foreseeable future. Of course, there is another possible explanation beyond the uniforms. We are also 2-0 when I do the recaps - everyone else on the SnakePit is 0-3. You can draw your own conclusion. I should, however, mention that the conclusion is not "Jim needs to do all the recaps." It's that everyone else needs to step up their recapping game, or we will be dipping in to the minors for hungry young recappers, who like crusts of stale bread... 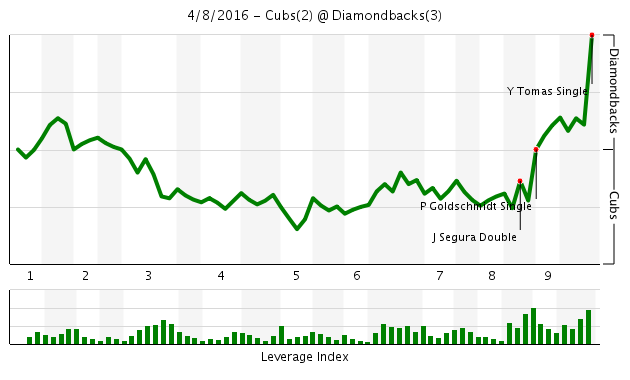 please don’t let this game suck so much I drink the half bottle of whisky in the kitchen.

After that invigorating win, we'll be back tomorrow evening at 5:10pm, for Zack Greinke's second start as a D-back. Hopefully it will go rather better than his first one.