Stop me if some of this sounds a bit familiar.

Watching the early innings of this one, you might be forgiven for wondering if the game had somehow been rained out - maybe they left the roof open - and Fox Sports Arizona were screening a re-run of last night's contest. The different uniforms, teal highlights this evening, might have been the main clue this was a different ball game altogether. Oh, go on then: "This was a different ball game". Fortunately, any similarities were purely coincidental from about the fifth inning on, and the Diamondbacks put up a six-spot of their own in the seventh, against the hapless Rockies bullpen,

And it had started off so well, too. Three batters in, and Paul Goldschmidt had delivered his first hit, run, RBI and home-run of the season. And a majestic blast it was, arcing high into the Chase Field night, before descending just to the right of the batter's eye. Probably one of those which felt longer than it was, the official measurement being 439 feet. Still, it got the D-backs on the board, and Jean Segura's first home-run as a Diamondback in the bottom of the third inning made it 2-0, after he pounced all over a hanging breaking ball and sent it into the left-field bleachers at Chase Field. What could possibly go wrong?

Answer: the fourth inning, where the Rockies almost homered for the cycle off Shelby Miller. He'd looked a bit shaky through the first three, falling behind quite a few batters, and struggling to locate his pitches consistently. However, he'd got through them without damage. It started with a solo home-run by that Trevor Story guy. No big: we still have the lead. However, a single, wild pitch and an slow infield hit for Gerardo Parra set the table for a three-run homer, and that lead was no more. Double, and another home-run - this one a two-run shot, completed the six-run inning, and left Shelby Miller wondering if anyone got the number of that truck.

Miller did actually get through six innings, and deserves some credit for that. With the bullpen having worked five last night, things could have got dicey if they'd been given another long haul, and the odds of keeping Colorado off the board for five innings in a row, shrunk accordingly. As was, Shelby allowed eight hits and a walk over those six fdames, with a walk and two strikeouts. He actually outlasted his opposite number, Colorado starter Chad Bettis being pulled with one out in the sixth. The D-backs had already threatened, getting the tying run to the plate in the fifth, but Socrates Brito popped out with the bases loaded.

Just as you were perhaps wondering if that was their chance, her comes the Rockies' bullpen to help. The sixth began with Jake Lamb doubling, and after a Yasmany Tomas walk, Phil Gosselin fouled out. However, Nick Ahmed singled home Lamb, chasing Bettis, and Jean Segura greeted the Colorado relief corps by ripping one past the despairing drive of their center-fielder for a two-RBI triple, to pull the Diamondbacks within one, and put the tying run at third with one out. Unfortunately, Brito and Goldschmidt both then struck out, and we finish this paragraph as we begun it - wondering if that was their chance.

It turns out to have been more of a warm-up act, as the DIamondbacks batted around in the seventh, sending ten men to the plate. David Peralta doubled, Welington Castillo's bat died a heroic death on a little bloop into right, breaking his ohfer the season and Jake Lamb walked, loading the bases with nobody out, and allowing Yasmany Tomas to tie up the game with a sacrifice fly. Rickie Weeks Jr legged out an infield hit for his first knock as a Diamondbacks to reload them, and Ahmed gave the D-backs a lead, singling to left. After Segura struck out, Chris Owings added a pinch RBI single, Weeks just avoiding over-running third, the safe call being upheld on appeal.

That loaded the bases for Goldschmidt, and Walt Weiss inexplicably opted to leave his left-hander in there to face Paul. The final outcome of this at-bat was never really in doubt, but Goldie toyed with his prey a bit, letting the Rockie reliever work the count full, and perhaps even believe he might have a shot at escaping the jam. Yeah. About that. Instead, Goldie drove the ball to the wall in left-center, emptying the bases to complete the six-run frame and give the Diamondbacks an 11-6 lead, having scored nine unanswered runs over just two innings. Starting pitching? It's clearly over-rated. Well, when you score 11 runs, it is.

We got to see Tyler Clippard and Daniel Hudson make their 2016 debuts, each man looking good as he retired all three men faced. With the game no longer a save situation, Jake Barrett came out for the ninth, and gave up a double, but closed things out. Five separate D-backs enjoyed two-hit nights, with Goldschmidt and Ahmed also reaching base on a walk. Goldy drove in four runs, Segura three, and Tomas doubled and walked, which helped counter some distinctly wobbly defense during the early going in left. But that will be forgotten, and the emphatic nature of this one likely serves notice that the spring offense was not entirely illusory. 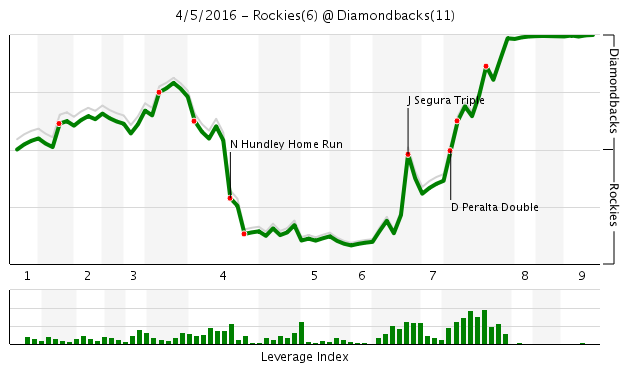 Most rec'd comment was by Zavada's Moustache, but appears to involve some kind of college football reference, so is automatically disqualified. Fortunately, he was also responsible for the thread's other pink comment.

Suddenly worried he’s not the pitcher that gets bailed out with run support anymore.

Not kidding there. The team scored more tonight, than the Braves did over an eight-start span for Miller, from June 18-July 30 last year. Still didn't get the W here though. Anyway, time for bed. Matinee game tomorrow, so expect a radically different Diamondbacks line-up, not least with Chris Herrmann behind the plate. Wouldn't be surprised to see Brandon Drury, and perhaps an infield outing for Owings as well. We can still win the series, folks - that was looking a bit unlikely about the middle of the fourth inning tonight!