Good performances from two unexpected sources powered the D-backs back above .500, though a five-run eighth helped make the final score more convincing than it looked like it would be.

I'd like to thank Mrs. SnakePit for tonight's victory. We were out for dinner at a local curry-house, and she said, "You should have a Kingfisher. The Diamondbacks always win when you drink beer." While not quite certain of the causative effect here, it would have seemed churlish to decline. So, a Kingfisher it was, along with the chicken tikka masala and a keema naan - and, lo, the Diamondbacks did indeed win. Further research into this phenomena will be carried out in due course. I'll be opening a GoFundMe for the beer. Please help.

However, I can't quite take all the credit, as we also got season-best performances from both halves of the Arizona batters, Rubby De La Rosa and Chris Herrmann. RDLR came in with previous game scores for his starts of 21 and 46; this evening, he recorded a 67, the same as the others combined. Meanwhile, Herrmann came into the game not even hitting on the Piestewa Freeway, having gone 1-for-20 in the season before tonight. He homered, doubled and drove in four runs, not only getting off Route 51, but going through the Loop 101 to finish the night batting 80 points higher. While there's work still to be done, obviously, now at .130, it's a start.

If certainly a small sample size, I do have to wonder if Herrmann perhaps worked better with De La Rosa in some way. All of Rubby's previous appearances had been with Welington Castillo behind the plate, and we'd seen the results - an 8.44 ERA over two starts and three relief appearances. This evening, he seemed a different pitcher, with his breaking stuff looking particularly impressive. There was still room for improvement there too; he threw a first-pitch strike to only 11 of 24 batters faced, and hit a couple of Pirates. However, six innings of one-run ball, on three hits, with a walk and six strikeouts? Every day, and twice on Sundays.

It didn't look too promising early on, De La Rosa having to work out of a jam in the first, with men on second and third and one out - a big strike-out of Starling Marte was key. However, he could stop the Pirates from getting on the board in the second inning - and this is my unsurprised face - courtesy of the long ball. Rubby was one strike from a clean inning, with the pitcher on deck but a full-count pitch was hammered the other way by Sean Rodriguez, and Pittsburgh took a 1-0 lead. I imagine most D-backs fans were thinking more, "Oh no - not again," rather than "That will be the only run De La Rosa will allow tonight." However, it was the latter which turned out to be true.

Indeed, that home-run turned out to be the last hit Rubby would give up until an infield single started the seventh and also ended De La Rosa's night. Chip Hale opted to go to the bullpen, and Herrmann helped out enormously by cutting down the runner as he tried to steal second after Tyler Clippard entered the game. A bunt single, walk and passed ball then put men on second and third again, before Clippard got a fly-ball to end the threat. Daniel Hudson worked a quick (nine pitch) eighth, and Enrique Burgos, called up today, pitched the ninth as it was no longer a save situation. The D-backs' bullpen threw three innings of one-hit ball, and needed only 32 pitches to do.

Arizona tied the game up in the bottom of the second. Nick Ahmed led off by coming back from an 0-2 count to draw a nine-pitch walk, and one out later, Herrmann banged a double off the fence in right. The ball ricocheted away from the outfielder and Ahmed scurried all the way home from first. Herrmann also made it to third, but De La Rosa couldn't help himself with the bat, grounding sharply back to the mound. Next time up though, there was no stopping the Diamondbacks, who took the lead as David Peralta cranked his second home-run in as many nights, like Rodriguez's coming on a full-count pitch with two outs and nobody on.

That ended the scoring for a long while, and the D-backs struggled against Juan Nicasio as much as the Pirates did against Nicasio, managing only three hits into the eighth inning. However, they got some help from former Arizona pitcher A.J. Schugel in his second inning of work. We managed more hits while recording one out in the eighth, than we had to that point in the game: there were singles for Paul Goldschmidt, Yasmany Tomas (extending his hitting streak to nine games) and Nick Ahmed, then Chris Owings reached on an error, before Herrmann got his first home-run for Arizona - his smile as he ran the bases lit up Chase brighter than last night's fireworks.

That five-run frame certainly padded the margin of victory and also pushed the D-backs into positive run differential for the first time this year. Goldschmidt reached base safely three times, on a hit and two walks, as did Ahmed (who also added a couple of nice entries to his highlight reel), while Herrmann had his two extra-base hits and a walk. The Dodgers beat the Rockies, so we still sit 1.5 games back of LA, but are effectively tied with the Rockies. It's pretty close across the entire NL, with seven teams within one game of .500. 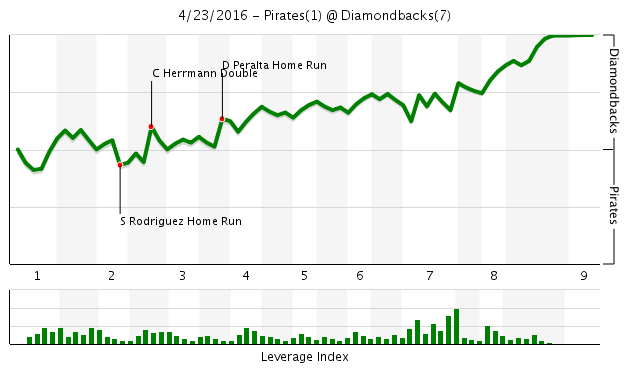 The rubber game of this series tomorrow, and looks like it could be an interesting pitching match-up, with Robbie Ray going for us, up against Francisco Liriano. 1:10pm first pitch for that, so see you then!