The Arizona Diamondbacks' Road to 90 Wins

18 games in, and we've got a .500 record, which seemed very unlikely after the first week of the season.

Share All sharing options for: The Arizona Diamondbacks' Road to 90 Wins

Over the winter, I've been consistently looking at 90 wins as a good target for which the team should aim, in terms of making the post-season. Since the double wild-card came into play, only two teams have won that many without getting a playoff spot, but nine have achieved October baseball with fewer wins, so 90 seems like a safely conservative bet for the post-season. Of course, more would be better, hopefully a division win allowing us to skip the single-game wild-card contest, but considering we haven't even been above .500 since our last playoff run in 2011, we will take whatever flavor of entry the baseball gods offer.

The chart below shows how the team has done so far. There are three lines, two of which are quite easy to explain. The blue is the actual number of AZ wins. The orange is a straight line to 90 wins at the end of the season - win five games in every nine. The red one is a more complex path, based on the schedule analysis I did before the season. There, I worked out, based on pre-season projections of each team's W-L record and home advantage, the chance of us winning each game. Add all those up and it's a projected win total, then scale it to reach 90 by season's end, and you get a path that takes into account the schedule - as we saw, April is the toughest month. 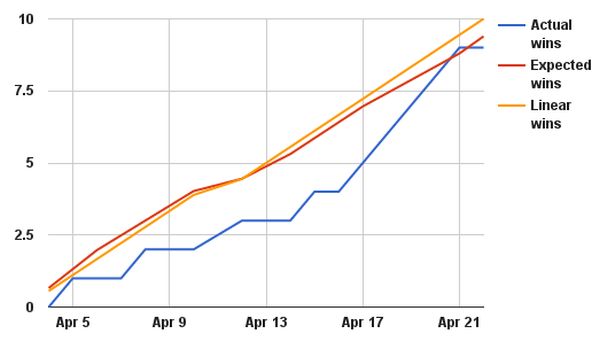 It's the hard early going which explains why the red line has been below the orange one; it'll catch up later, when we hit the easier parts of the season, but the road trip just completed was seen as a big early test.  The simulation gave Arizona only a 41.2% chance of winning each game in San Francisco, which works out at about 35-1 against, for the four-game sweep we achieved. Obviously, our success there led to a marked improvement in the graph. After we lost the second contest in San Diego, we were already 2.4 games behind the expected necessary pace after only 12 contests, and I don't need to remind you how grim things were looking.

But a five-game winning streak righted the ship, and as a result, we came into last night's opening contest against the Pirates, with our actual wins sitting above the expected wins, for the first time in the season. A win there would even have joined it up to the more taxing linear wins line, but it was not to be. However, a win this evening will takes us right back on to the expected wins course, which says we should possess a 10-9 record, on our way to being 14-13 at the end of the month. However, that may now be tougher than we thought, with the Colorado Rockies playing significantly better to this point than the projections had them.

The playoff odds charts remain relatively unimpressed to this point. Fangraphs gives us a 9.0% of post-season activity, which is only fractionally up from the 8.9% we had on Opening Day. It reached a high of 10.3% before last night, but is still rather better than the low of 4.3% before the winning streak began. Baseball Prospectus is a little more generous, giving the Diamondbacks a 16.4% shot, though I can't say how that has changed since they don't provide any historical values - it was probably there or thereabouts though. All told, I think the Diamondbacks have done what they needed to, so far, and probably a bit better than many outsiders expected.

What is a surprise, is the manner we have done it: no contribution at all from A.J. Pollock, and Paul Goldschmidt hitting .238. Last season, those two combined to be worth 16.2 bWAR, one win every ten games; so far, 18 into the 2016 campaign, their total is one-half of one win. There may be an aspect of smoke and mirrors here: six NL teams have better records than Arizona, even though we've been outscored by five runs. By team fWAR, our hitters rank 7th and our pitchers only 11th. Interestingly, that latter value masks a sharp divide: the starters are dead-last in the league, while Arizona's bullpen is second - in part because they have thrown 14% more innings than anyone else.

In the early going, it has been Jean Segura and Jake Lamb who are front-runners for team MVP, by both fWAR and bWAR - the picture gets considerably more muddled after that. Both have benefited from high BABIP (Lamb .372, Segura .365), but particular in Lamb's case, that's likely a result of hard contact, his line-drive rate of 36% the best on the team. With a good walk-rate too, I'm thinking his contribution is perhaps more easily sustainable than Segura, though Jean does have speed on his site, and the numbers indicate he is being more selective this year. If maintained, I'd expect some regression for him, though he'll still be significantly better than 2015.

To me, the main positive has been the negatives. By which I mean, if you'd told me before the season that through 18 games, Zach Greinke and Shelby Miller would have one combined win with an ERA of 6.52, Goldy was hitting .238 and David Peralta had one home-run, I'd have expected a MUCH worse record than 9-9. If some of the above is turned around - and I have varying degrees of confidence in that - then this should offset and perhaps even exceed the return to earth from our over-achievers. There's still a long way to go, certainly; however, the team has thus far done a solid job negotiating the shoals of a nasty April and are in better shape than many teams.