The Diamondbacks saw extra innings for the first time this season, on a night where Shelby Miller was unable to get through two innings - albeit due to injury rather than ineffectiveness

I'm just glad this one started at 5:40pm, rather than two hours later, as it did on Friday night, because it took the best part of five and a half hours, and 14 innings for this one to be decided, in the direction of the home team. But the cost to the Diamondbacks may be more than one game in the standings. They saw starter Shelby Miller have to be lifted from the game without even getting through two innings, due to an apparent finger injury, and that left the bullpen horribly taxed, with four relievers having to throw multiple innings, and the D-backs eventually turning to starter Rubby De La Rosa.

The teams traded zeroes in the first inning, but it was the second frame where Miller appeared to hurt himself. The precise details are unclear, but it seemed to happen when he was throwing to Padres' pitcher Andrew Cashner, and Miller scraped the outside of his hand on the dirt during the follow-through. There was already one run in, and Miller had walked the preceding batter intentionally to get to Cashner with two outs, but had clearly lost his control, walking the pitcher. The D-backs staff came out to examine Miller's hand, but he stayed in the game - however, Miller walked the next batter too, forcing in the second run for San Diego.

The official word is that Miller suffered cuts on both knuckles of his right index finger. There's no word yet how bad the injury is, but given how much of an impact it appeared to have on Miller this evening, it seems possible we could be looking at a DL stint. Given the length at which the bullpen was forced to work this evening, throwing 11.1 innings (excluding RDLR), that move may be made as soon as tomorrow, bringing up an extra bullpen arm for the next four days, to help out until Miller's spot in the rotation comes up again. The 10-day waiting period would now be over, for the likes of Silvino Bracho and Enrique Burgos, or perhaps we might look for another long reliever. We'll see.

This evening, Matt Buschmann was the first man called upon from the bullpen, inheriting a nasty, bases loaded situation in the second, but stranding the base-runners with a strikeout. He did allow a solo home-run to Matt Kemp, to lead off the third, but that was the only hit Buschmann allowed over his 2.1 innings of work. The much malligned Randall Delgado was next, and tonight, he got the job done with two scoreless frames. Andrew Chafin, Daniel Hudson and Tyler Clippard each threw scoreless innings of various effectiveness - Clippard was helped out by a stolen base that was reversed on appeal.

Meanwhile, the Diamondbacks offense was slowly crawling their way back into this one, though had to do so without the benefit of a hit with runners in scoring position, going 0-for-13 there for the evening overall. Arizona got on the board in the fifth: With one out, Yasmany Tomas singled, and pinch-hitter Brandon Drury doubled, putting men on second and third. Tomas then came home on a Jean Segura groundout to make the score 3-1. The deficit was cut to a single tally in the seventh inning. Tomas doubled and went to third after Upton (no - the other one) bobbled the ball, and Drury brought him with a fly-ball to left.

The D-backs were able to tie things up in the eighth inning. That started with another pinch-hit, this one a double off the bat of Rickie Weeks Jr. Paul Goldschmidt advanced Weeks with a groundout to the right side of the infield, but David Peralta couldn't bring Weeks home. Fortunately, the Padres made up for that, their pitcher throwing a wild pitch that got past catcher Derek Norris. It got a strong ricochet off the backstop, but the pitcher was slightly slow to cover home-plate, and Weeks was able to scurry home and just beat the tag, being called safe - though the decision had to withstand scrutiny from New York, as the Padres appealed, but were turned away.

That was it as far as scoring in regulation went, and the game went into the uncharted territory for the 2016 Diamondbacks of extra innings. Jake Barrett took over on the mound, and was extremely solid in an extended outing, putting up a pair of zeroes on one hit with no walks and a strikeout. Both sides did have their chances, but were unable to capitalize. Some excellent defense played its part: Goldy was likely robbed of extra bases with a grab by the third-baseman, Nick Ahmed lost out similarly to a diving grab by the Padres' right-fielder, but took one away with an early play of the year candidate, ranging deep in the hole before unleashing a perfect throw to first.

It looked like the game might end in the bottom of the 13th, as the first two reached for the Padres against Brad Ziegler in his second inning of work. The key play was a hard ground-ball back to the mound which could have been a double-play, but Ziegler was unable became an infield hit. The bases were full of Padres with one out, but their bench was empty as well, and they had to use a pitcher as a PH, who struck out, and last night's villain for them, John Jay, fared no better against Ziegler this time, as he flew out harmlessly to left-field and we rolled on into the 14th inning.

After the Diamondbacks couldn't score, and with the bullpen emptied, they turned to De La Rosa, who allowed a lead-off single, but then fanned the next two. Unfortunately, he couldn't quite escape, and Upton (no - the oth... Oh, never mind!) just managed a wall-scraping home-run over the fence in center-field, to give the Padres a walk-off win. These kind of games are always wonderful to win, but suck when you lose them, and we'll see how the team rebounds tomorrow, with another chance to take the series. 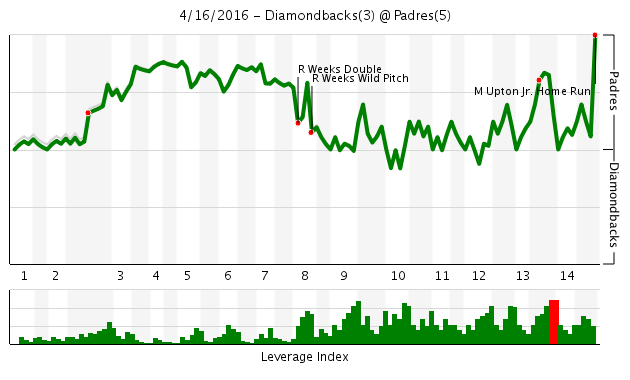 Hey guys I just got off work! So hows the ga-

We're back at it again tomorrow afternoon, with a 1:40pm first pitch, as Patrick Corbin takes the mound and the D-backs will try to do better in their fifth chance to win the series.