The Diamondbacks somehow managed to snatch victory from the jaws of, at least, extra innings, with Brad Ziegler picking up his 30th consecutive save. I think all 29 of the previous ones were probably easier.

Share All sharing options for: Diamondbacks 3, Padres 2: The Great Escape

Free baseball seemed particularly inevitable, given this was a game that willfully and maliciously was scheduled by the San Diego Padres to begin at 7:40pm. Fortunately, we managed to dodge that fate, though I think the finish time of 10:48pm must be close to the latest ever for the Diamondbacks in a regulation game. This one ground to a halt, particularly in both ends of the eighth inning. The Padres used three different pitchers to get the three outs, while Daniel Hudson threw 14 pitches and recorded so many mound visits with various personnel, I was beginning to think he was getting his mail forwarded there.

However, probably the most important thing out of this was seeing a Zack Greinke who looked a damn sight closer to being the guy we signed; the one getting a million dollars per start. While he didn't get the W, becoming the 19th consecutive D-back starting pitcher without a win, this was clearly the best he has been in an Arizona uniform, mixing up his pitches and keeping the hitters off-balance. The six hits allowed included two infield singles, a seeing-eye single through the whole at short which scored San Diego's first run and a bloop to left-field that drove in their second - Tomas was charged with an error on his throw home, which allowed the hitter to reach second.

Indeed, the hardest hit ball was likely the final one of Greinke's night, a one-out double in the eighth inning into the left-center gap. That ended a streak of 11 consecutive Padres set down by Zack, including a completely clean sheet the third time through the San Diego order. He was efficient, taking only 95 pitches to get through those 7.1 innings of work, and threw first-pitch strikes to 18 of 29 batters. He was charged with two runs on six hits and a walk with five strikeouts, and the resulting Game Score of 62 was the best by a Diamondback this season, beating the previous high of 58, from Robbie Ray yesterday.

Daniel Hudson took over for the rest of the eighth, having to get two outs with a runner in scoring position, so having precious little room for error. He fell behind Matt Kemp 3-0, before they decided to go ahead and put him on, and then got Upton (no - the other one) to strike out, and Derek Norris to ground out, and so we went into the top of the ninth, with the score tied at two. For the Diamondbacks hadn't been able to get much done against James Shields either, although Welington Castillo did get his first home-run of the season to give us the lead, briefly, in the top of the second inning.

Indeed, after Jake Lamb legged out an infield single, immediately following the BeefBomb, the only hit we had through two outs in the sixth was by Greinke himself. It didn't help that we managed to run ourselves out of at least one inning. After a pair of walks in the fourth, David Peralta got himself thrown out, after unwisely trying to advance on a pitch in the dirt, the D-backs once again running into the final out of an inning at third-base. But with the team trailing 2-1 in the seventh, Yasmany Tomas and, one out later, Nick Ahmed, both managed to squirt doubles just fair down the right-field line, tying things up.

Which brings us to the ninth, where the D-backs scored without hitting the ball out of the infield. Lamb beat the shift with an infield single to short, then - just after the booth had finished talking about him not being a good base-runner - stole a base and advanced to third on an error, as Norris's throw tailed away from second into the outfield. Pinch-hitter Phil Gosselin then executed a swinging bunt to perfection, getting the ball just past the pitcher on the first-base side, and the fielder's throw home was too late to get Lamb, who slid safely in to give Arizona a 3-2 lead, allowing them to turn the ball over to Brad Ziegler for the bottom of the ninth.

Three pitches and two hits later, the Padres had men on the corners. This wasn't completely uncharted territory for Z. On August 27, 2013,  coincidentally against the Padres (but at Chase), he had gotten into the same situation - runners on first and third, no outs in the ninth and with a one-run lead. That didn't end so well, as he blew the save, although the D-backs won 10-9 in ten. I'd have settled for the same: give up a run and take our chances in extras. Ziegler, however, was having none of it, starting with a strikeout of Alexi Amarista - though the runner on first stole second, taking the double-play out of the equation, and putting the winning run in scoring position.

I'm sorry, did I say "taking the double-play out of the equation"? Simple solution to that: walk the next batter and load the bases up. Then, on a 2-2 count - and without having thrown a strike - you really could not have drawn it up any better than this:

Well, that was a nice surprise, wasn't it? Just as I was settling down, at best, for the long-haul, the game finished with a sudden, unexpected victory - bit like getting a ealk-off home-run from a relief pitcher or something. Still, after last night, I'll take the fourth win vultured by a relief pitcher this season - Hudson, in this case - and also out first non-teal tinged win of 2016. 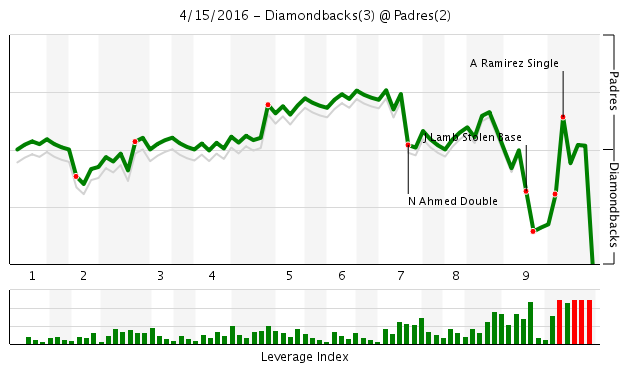 If there is no afterlife

why would anyone give themselves the penance that is eating Arby’s?

I think it was a question for the SnakePodcast, so tune in Sunday for the answer! The win runs my recap record for the year to 3-0, so you'll be pleased to hear I will also be recapping tomorrow night, since Turambar is up in Sedona at a wedding. I hope he manages to avoid any vortices. However, at least Saturday's game starts at a much more civilized hour of 5:40pm, with Shelby Miller looking to follow Greinke down the improvement highway.