The team will also be wearing commemorative uniforms for Mothers' Day, Fathers' Day, Memorial Day and Independence Day as well as a slew of special caps. Clefo, you're gonna need a bigger spreadsheet... 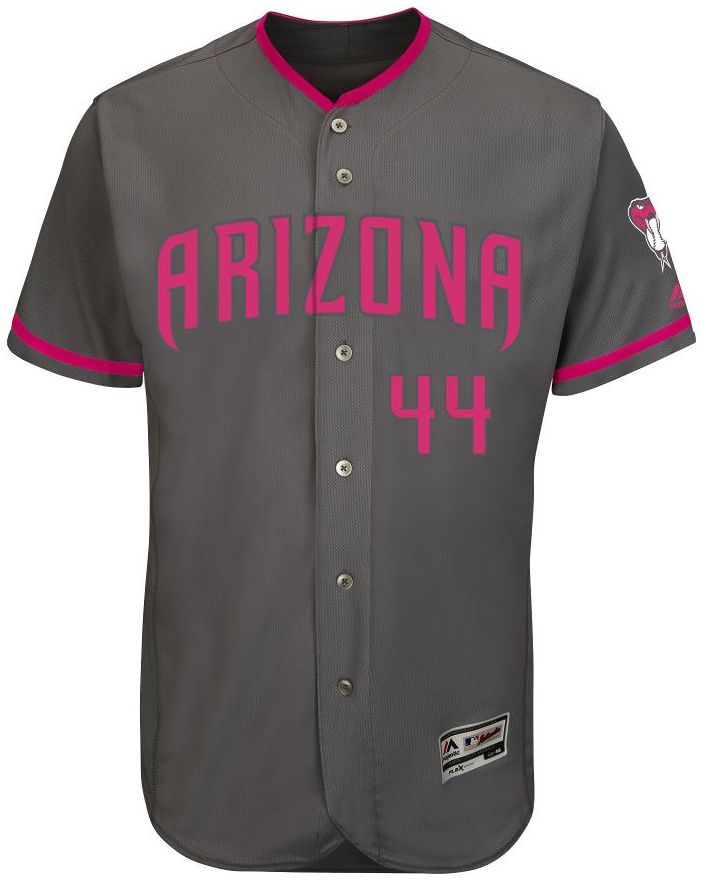 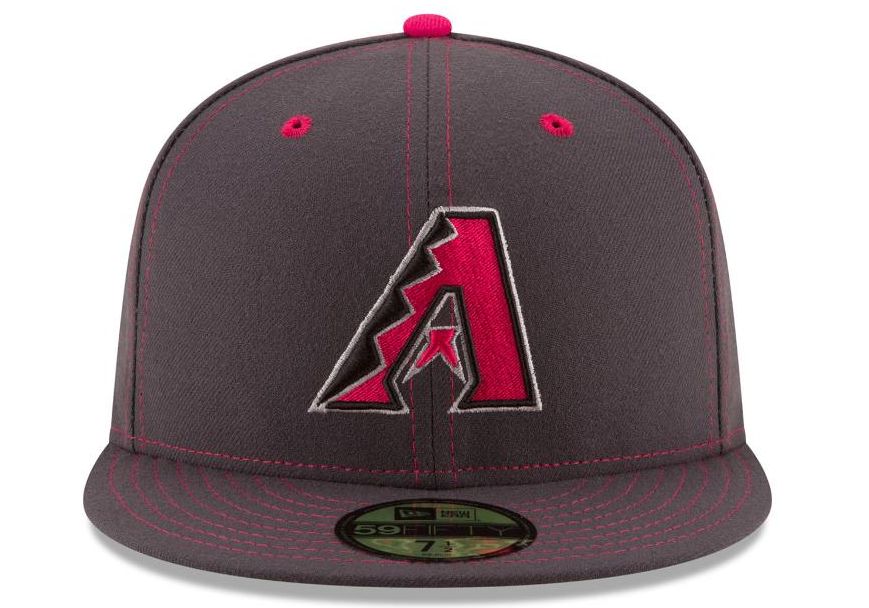 Father's Day uniforms and caps will also maintain the same Club marks, but will feature light blue incorporated in the logos. These caps will also have a grey base, similar to Mother's Day. Players have worn blue ribbons & sported blue wristbands throughout the years on Father's Day since MLB first partnered with the Prostate Cancer Foundation in 1996. 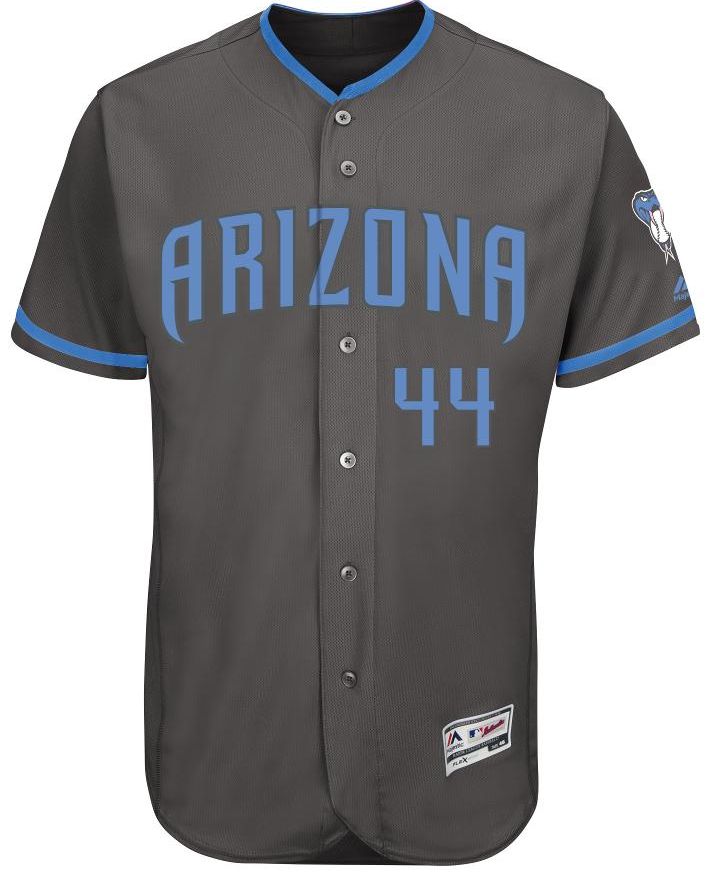 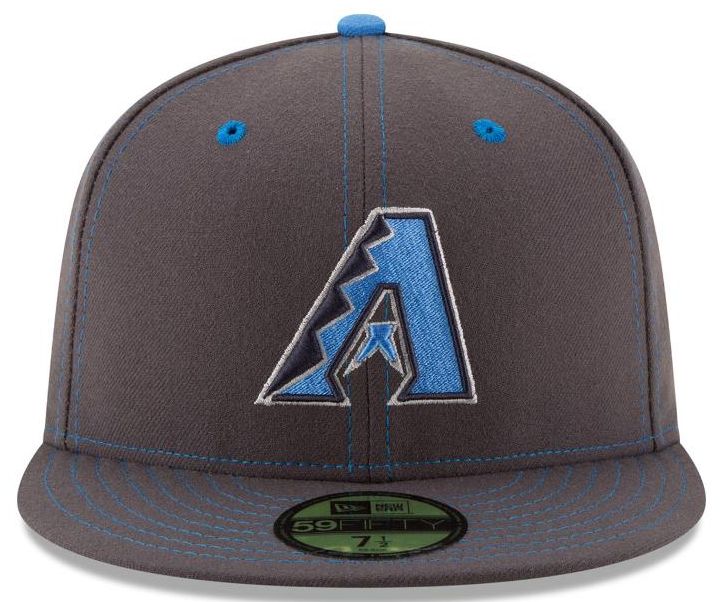 For the eighth consecutive year, MLB and New Era have created a special cap for teams to wear during Memorial Day games, while Majestic has designed a special matching jersey for the fourth year in a row. This year's uniforms utilize a new woodland camouflage design licensed by the US Marine Corps. The Toronto Blue Jays uniform will feature the distinctive Canadian Forces CADPAT design. MLB's annual league-wide observance of Memorial Day will honor those who lost their lives while serving their country. MLB plans to participate in the National Moment of Remembrance and ballparks on Memorial Day will conduct moments of silence and special pre-game ceremonies. 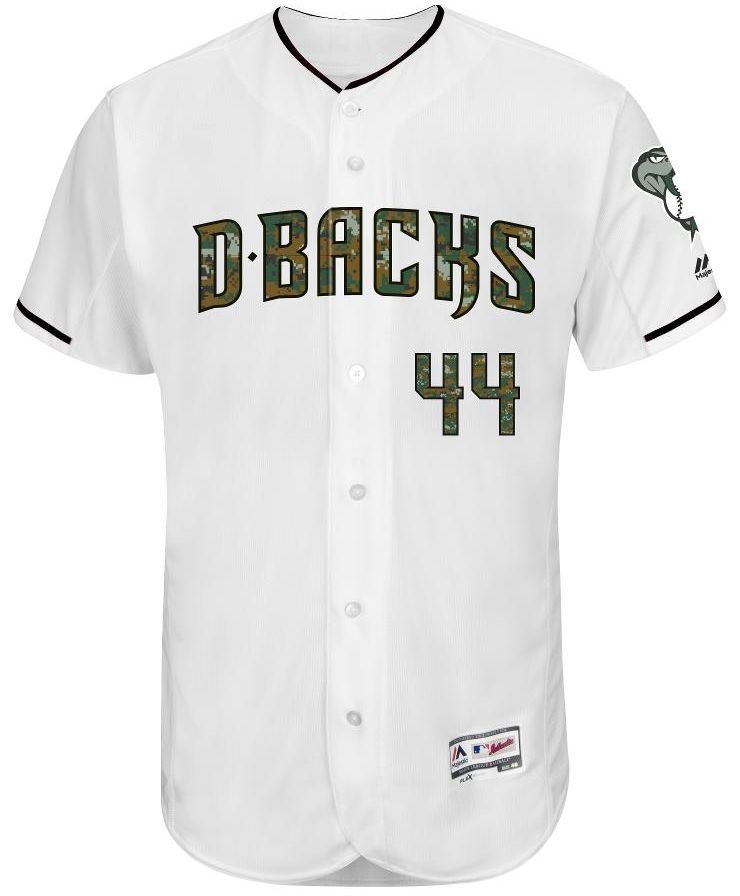 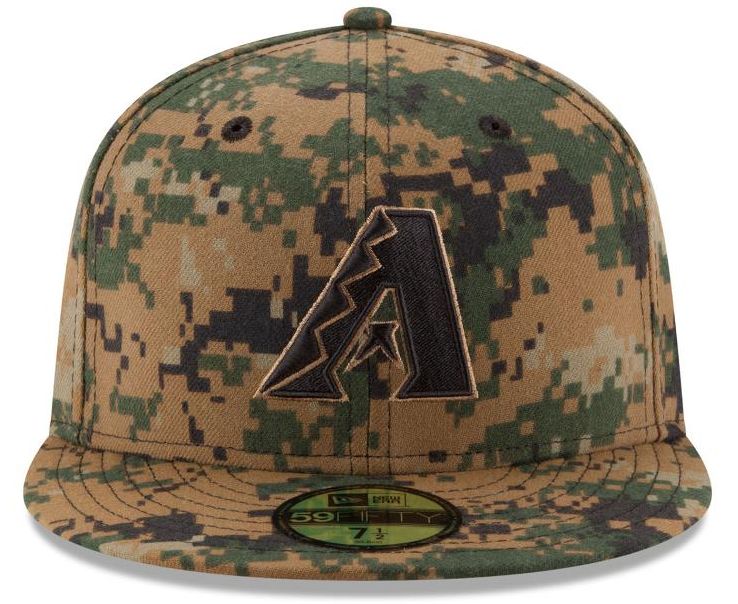 For the ninth consecutive summer, US-based MLB clubs will sport red, white and blue stars and stripes-decorated caps to celebrate Independence Day. For the second year in a row, clubs will also wear a matching jersey on the Fourth of July. The Toronto Blue Jays uniform will feature Maple Leaf designs on the cap, incorporating the colors of the Canadian flag and will be worn on Canada Day, July 1, as well as July 4 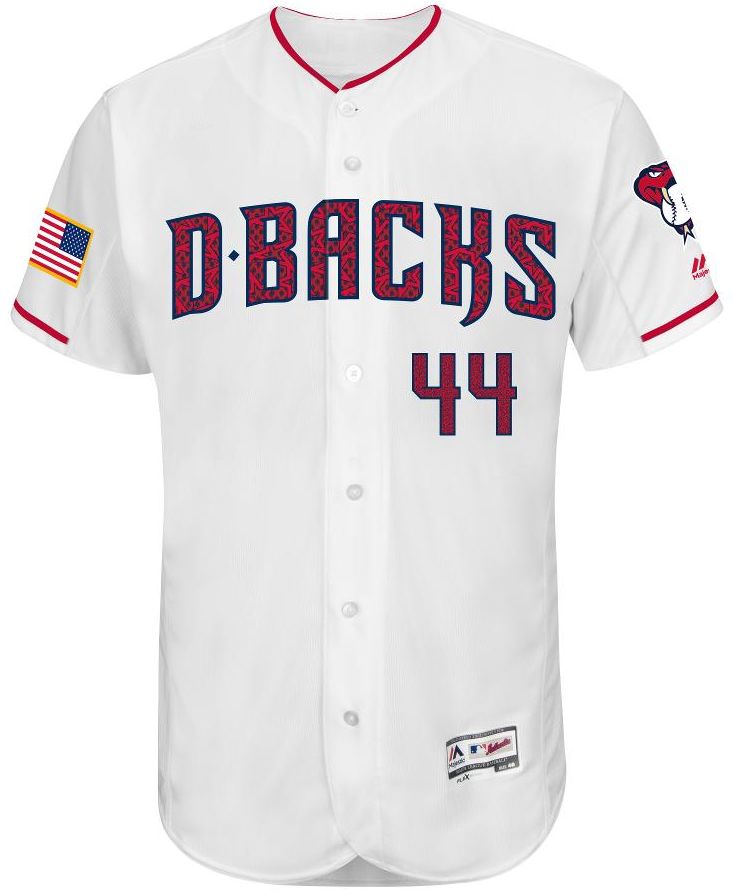 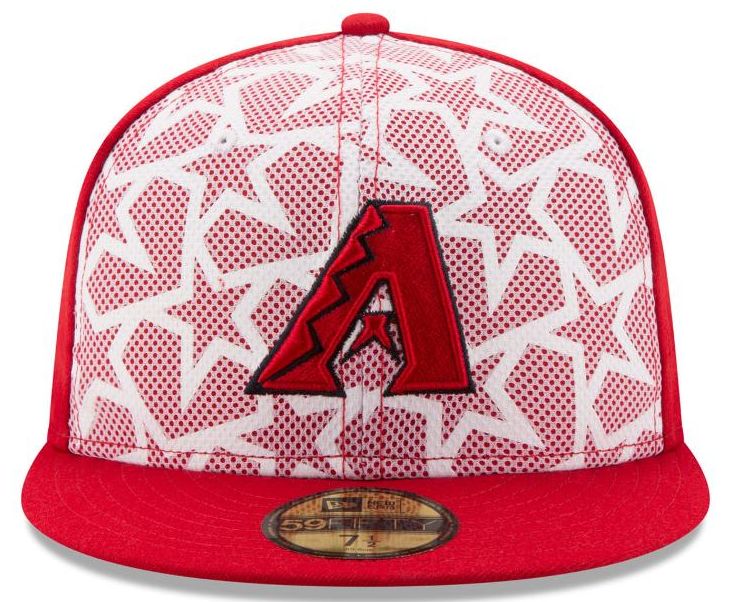 The jerseys and caps worn on Gatorade All-Star Workout Day, which includes the T-Mobile Home Run Derby, will borrow their design from the All-Star host club, the San Diego Padres. The color scheme this year is patterned after the classic brown and yellow color combination worn by the Padres from 1969-84, a combination San Diego modernized and brought back for the 2016 home Friday alternates. Featuring touches of orange and modeling the lettering made famous by the Padres, the uniforms evoke the style of the late-70's and early 80's. 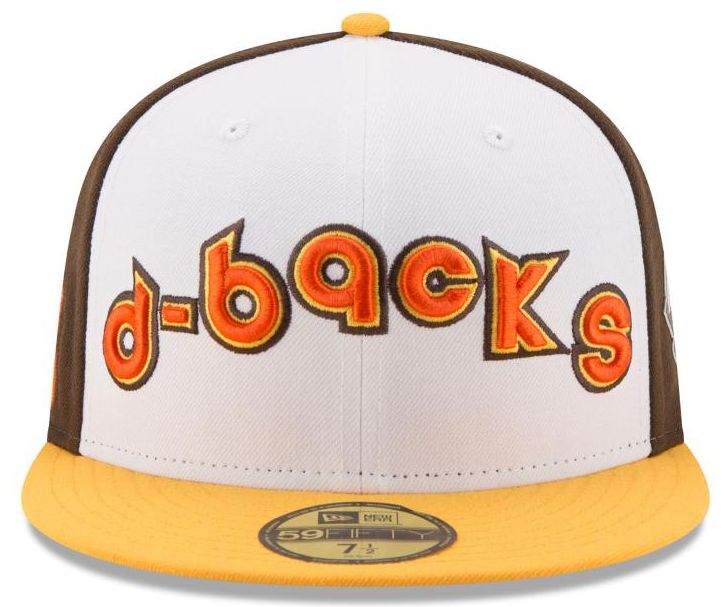 For the third consecutive year, New Era, in conjunction with MLB, has created a new cap design for every team to be worn specially in the All-Star Game. This year's caps feature a gold outline around teams' respective logos and a heather grey brim. Also new this year is a set of gold metal stars as the eyelets on the top of the caps' front panel. Additionally, each cap has a pair of gold stars flanking the silhouetted batter logo on the back of the crown, a practice that began with the 2011 All-Star Game in Arizona.

Jerseys worn during the All-Star Game will again feature a star on either side of the silhouetted batter logo on the upper back, above the nameplates. For the second year in a row, players' signatures will be printed into the front of their jerseys on the lower, right-hand side; the signature will be surrounded by stars representing the number of All-Star appearances they've made in their career. Jerseys will also feature a patch of the primary All-Star Game logo on the sleeve. 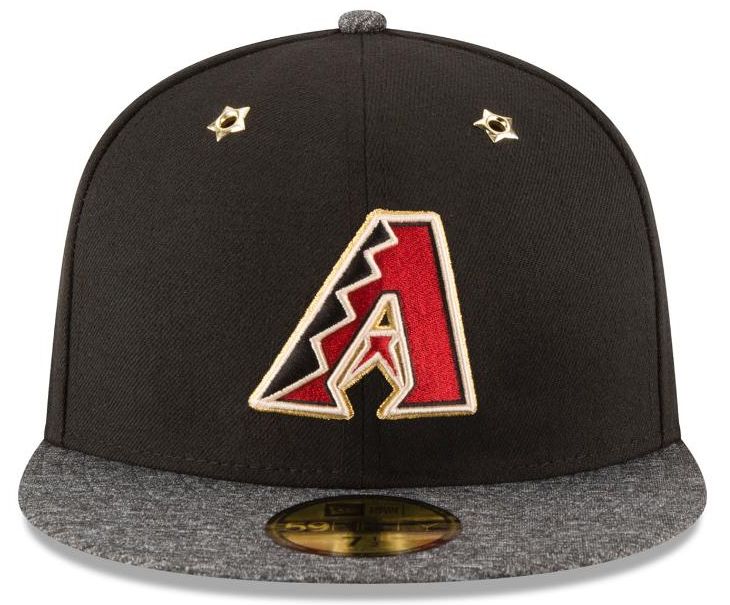 So, by my count, that's now eleven different uniforms, and more than a dozen different caps which the Diamondbacks will be wearing this season. Of course, they didn't have any particular choice in this decision, which is clearly a mandate coming down from above, and applies to all 30 teams - but given this was the season, the D-backs opted to go for quantity over quality (#TealFTW), the timing here is unfortunate.

Aesthetically, it's a bit of a mixed bag. The unis are mostly okay, but some of the caps are just frickin' hideous: the Independence Day one in particular, looks like... I dunno, words fail me entirely there. The "throwback" cap for the All-Star Game is also flat-out terrible, but then evoking "the style of the late-70's and early 80's" is a bad idea to begin with, because the style of those times should be buried along with Jimmie Hoffa. And I speak as someone who lived through that era.

Oh, well. Maybe it's just me. I'm sure the Internet will be abuzz with more hawt taykes on these.