Nick Ahmed reminded viewers that Andrelton Simmons is no longer in the National League, then padded his case for defensive honors by hitting his second home run of the season. Not to be outdone, Goldschmidt tallied his third homer, as the Diamondbacks spoiled the Dodgers' home opener. Patrick Corbin was strong through six innings of quality work.

The Dodgers hosted a rare mid-week, non-getaway day game. The game was the Dodgers' home opener. It was Kenta Maeda's first for the team and, legendary announcer, Vin Scully's last. Jean Segura was the first batter to step into the box and he was warmly greeted to Chavez Ravine by being hit by Kenta Maeda. Segura would later advance to second on a wild pitch, but nothing came of the inning as Maeda managed to handle Brito, Goldschmidt, and Peralta. Enrique Hernandez led off the Dodgers' half of the first with a single, but nothing more came of that either, meaning both teams managed to fail to do anything with getting the leadoff man on first.

Welington Castillo led things off for Arizona in the second by getting himself a single. He was followed by Jake Lamb who cracked a double. With Castillo running though, this created a runners on second and third situation with nobody out for Yasmany Tomás. Tomás was unable to adjust to Maeda's steady diet of changeups though and went down swinging in 5 pitches. Patrick Corbin was next, but was unable to help his cause. Nick Ahmed ended the Arizona half of the inning by grounding out.

Patrick Corbin's new weapon was not kind to him today. Howie Kendrick took the first pitch he saw (a changeup) and deposited it in right field for a leadoff single in the second. Three batters and a soft single (on a changeup) later, he was brought home on a squeeze play successfully executed by A.J. Ellis (on a changeup).

While Goldschmidt gave the ball a ride in the third inning, it was not enough to get out. His one pitch was the only excitement to be found for Arizona in its 12 pitches of a third inning. Meanwhile, the Dodgers got the leadoff man on base for the third inning in a row. Corbin would have none of it though, getting Puig to fly out weakly to Peralta in right, striking out Adrian Gonzalez on three pitches, and inducing a first-pitch pop-up to Segura at second out of Justin Turner.

Peralta got on via walk to start the fourth inning. This, despite a fielding error by Howie Kendrick, nothing was doing for Arizona in the frame. The Dodgers failed to get the leadoff man in the fourth, but did draw a walk off of Corbin before going quietly themselves.

With one out in the fifth, Jean Segura was the beneficiary of some BABIP love picking up a single. Unfortunately for the Diamondbacks, he then got thrown out after an ugly stop-and-start attempt to steal second with Paul Goldschmidt in the box and two out. The bottom of the fifth brought some drama as Yasiel Puig was deemed safe after review on a hit to Tomás where Tomás' throw into second left a bit of something to be desired. However, it was all for nothing and the teams went into the sixth, with Los Angeles leading 0-1.

Paul Godschmidt led off the inning with a Routine grounder to short, followed by a David Peralta strikeout. Nonetheless, the Diamondbacks were determined to make things interesting. With two out, Welington Castillo singled on a liner to left. He was followed by Jake Lamb, who for the second time on the day hit a double with Castillo on first. This time however, Windmill Williams was hard at work, waving one of the slowest runners in baseball around to third. The result was much as one would expect though, as Castillo was gunned down at home. The Dodgers went quietly in their half of the inning

Still looking for offense the Diamondbacks opened the seventh with Tomás at the plate. After he popped out to first, Patrick Corbin was unhappily lifted for pinch-hitter Phil Gosselin who proceeded to strike out quickly. This brought up number nine hitter, Nick Ahmed. Ahmed went fishing for a pitch that looked like it was probably 6 inches below the strike zone, but got enough wood on the ball that he sent a rope down the third base line. To pretty much everyone's amazement, the ball just cleared the low fence in the left field corner, and suddenly the game was tied 1-1 on Ahmed's second homer of the season. The Dodgers managed another leadoff hit in the seventh, this one off of Tyler Clippard. The hit was promptly erased by a double-play ball and the Dodgers then went meekly into the eighth.

The Eighth brought more good things for the Diamondbacks. The second hitter of the inning was Paul Goldschmidt. Unlike Nick Ahmed's wall-scraper, Goldschmidt's power display was a no-doubter on a 3-0 pitch deposited deep just left of center field. The Diamondbacks took the lead 2-1. The excitement was not over though. After David Peralta lined out, Castillo doubled. Not wanting to mess with Lamb this time around, the Dodgers put the third baseman on first. This brought up Tomás, who also managed to take a walk, loading the bases. This brought out pinch hitter Rickie Weeks, who took the count full before succumbing to a swinging strikeout.

The Dodger half of the eighth was not without its angst. Daniel Hudson was called on to take over for Tyler Clippard. After a hit batter and a single, the Dodgers had runners on first and second with nobody out. Hudson buckled down though, inducing a strikeout and two flyouts to get out of trouble and send the Diamondbacks into the ninth inning, up 2-1.

The ninth inning started with Nick Ahmed being hit by a pitch. Socrates Brito scored him with a one-out triple. Brito then scored on a Paul Goldschmidt productive groundout. Up 4-1, the Diamondbacks went into the bottom of the ninth, with Brad Ziegler taking the mound.

Corey Seager led the frame off with a double to Tomás in left. He advanced to third on a groundout by Pederson. Seager then scored on a groundout to first by catcher Yasmani Grandal. Enrique Hernandez, who opened the game by getting on base, ended the game by striking out. Diamondbacks win!

The COTD was easily far and away provided by AZRattler, who has provded the pit with a new gif that is sure to get plenty of use with Matt Williams back coaching third base.

Save this one for the future folks. 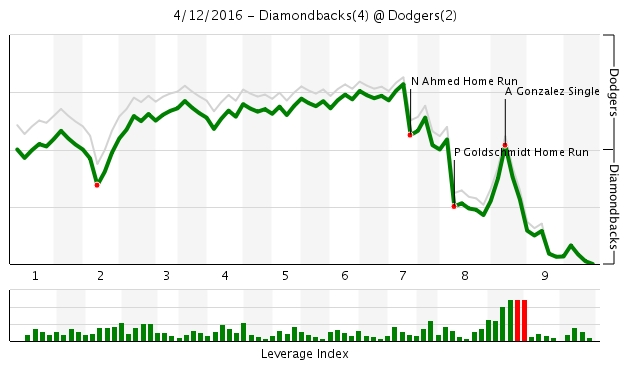 We'll be back at it tomorrow, with an evening game which sees Rubby De La Rosa take the mound for Arizona.