And so, the best Cactus League campaign in team history comes to an end. How does that impact fan confidence as we head into the regular season?

Firstly, a quick correction to the results from January and February. I spotted a bug in my calculation, which was including one batch of votes twice in the overall total. It didn't actually impact the numbers too much, but January's corrected score was dropped from 6.79 to 6.74, and February from 6.79 to 6.73. My deepest, humblest apologies for this unacceptable oversight, and I trust this will not impact your appreciation of the SnakePit going forward, in too great a fashion.

That said, onto March's results. Here's how the votes came in, with pitchers and catchers having reported, but before there was any significant spring training action on which to base an opinion. There were 136 respondents this time round.

Unsurprisingly, the overall number didn't change too much from February. A slight uptick, but nothing you would say amounted to a surge in optimism - an increase of one-tenth of a point, to 6.83.Still, let's add the March results to the chart showing progress over the course of the year, where it'll become the third bar there. 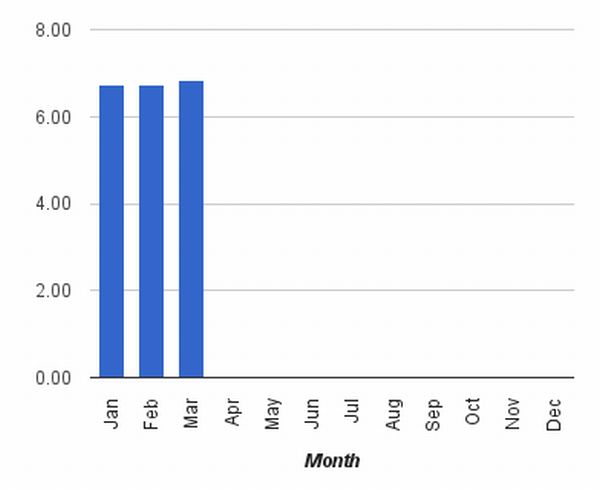 Splitting down the individual votes, the overall increase looks to have been mostly due to a further increase in the very, very, VERY confident fans: those voting "9" went up from 8% to 10%, and are now twice the percentage they were at the start of January. Elsewhere, there was a return to the "7" level of voting, drawing numbers from the options directly on either side, "6" and "8" both showing slight drops. Here's the breakdown chart, with March becoming the orange bar on the right for each value. 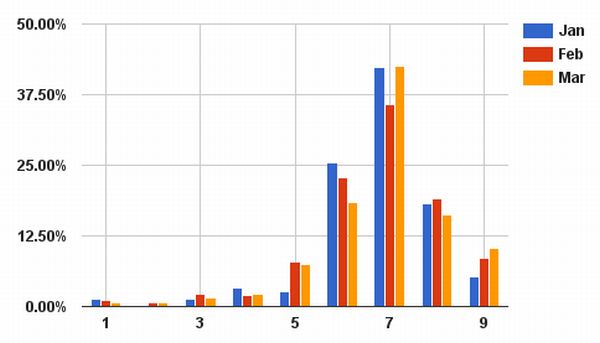 It's understandable that things have remained fairly static over the first quarter of the year, with relatively minor transactions by the team, after the seismic shift which was the signing of Zack Greinke. But I'm very curious to see how the needle has been moved by the team's near-total domination of the Cactus League (with the bizarre exception of the Colorado Rockies, who appear to be the mongoose to our snakes!). Yes, everything gets reset back to 0-0 for our first game next week. But the offense in particular has been generating warm, fuzzy feelings for the past month. Will that be reflected in higher votes in the poll?

Tune in next month to find out.... Though you can get an idea, by voting or viewing the results so far!