Spring training is now under way, and the Arizona Diamondbacks were undefeated after their first three games? Does that affect this month's (slightlly-delayed) confidence poll?

First, let's review the February results, which saw a bumper crop of respondents, with 268 votes. That was up from 149 the previous month. Here's how the votes came in:

Despite significantly higher votes than last year, and everyone having the chance to change their opinion, the average was almost exactly the same. And I don't just mean to one decimal point. The average confidence vote last month was 6.79, compared to January, when it was... 6.79. There was a slight uptick this month, but you had to go to the third decimal place to find it. This does kinda make sense, given the relative lack of reasons for change. Here's the monthly chart, which I'll keep updating as the season goes on, and we can track how fan optimism waxes or wanes over the course of the year. 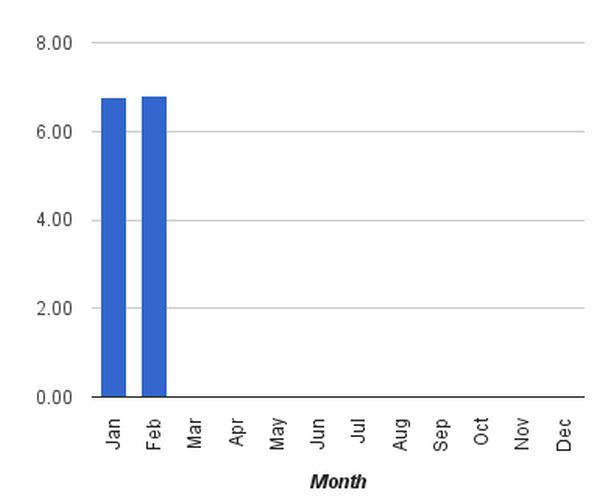 Perhaps more interestingly, is the change we did see in the breakdown of the votes. There was a general broadening of the opinions. Last month, more than two-thirds of voters (68%) opted for a six or a seven. While those were still the most popular selections, the overall percentage dropped to 59%. However, this led to greater numbers both at the top ant bottom end. Those voting 8 or 9 increased from 23% to 28%, while those voting five or lower went up from 9% to 14%. These effectively cancelled each other out, leaving the overall confidence factor unchanged. Below, you can see the percentages at each level for January and February; we'll also track this though 2016. 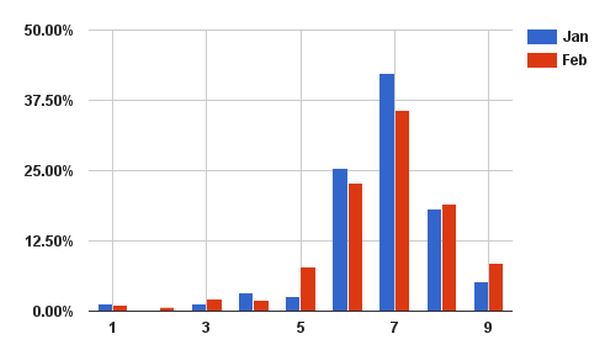