The Diamondbacks by their numbers: 10 Fun Facts

Following up on our article last week, about the upcoming chances in Diamondbacks numbers, here are some more fun* facts about the history of the numbers worn by the team. [* - "fun" not contractually obliged]

Share All sharing options for: The Diamondbacks by their numbers: 10 Fun Facts

1. The least-used low (less than #60) number, discounting the retired ones is, perhaps surprisingly, #3: maybe no-one wants to be compared with Babe Ruth? That has been worn only three times, by Danny Klassen, Carlos Baerga and most recently., Tony Abreu in 2010. The five-year break since is also the longest absence from the field, with #39 (last used in 2012, by Bryan Shaw), the next highest.

2. Jeff Suppan and Mike Robertson can legitimately claim they have had their numbers retired by the Diamondbacks. Because they wore #20 and #51 respectively, before Luis Gonzalez and Randy Johnson took them over. Suppan, you probably have heard of, since he played 17 seasons in the majors. Robertson, managed a total of 39 career games, and only seven of those were starts.

3. Outside of #42, which has never been assigned to a Diamondback - of course, as the photo above shows, it does get worn - the lowest unused number is #53. If it was cursed, guessed Don Drysdale never noticed. It seems kinda odd, because the numbers on either side have both seen double-digits in Diamondbacks. Edit As freeland pointed out, that's Glenn Sherlock's number - since he has been with the team every season they've played since 1998, it has been as unusable as #42.

4. The most popular number? #32, sported by sixteen different Arizona players over the years, with Brandon McCarthy being the last. Four separate men wore it in the same season, 2007: Randy Choate, Bob Wickman, Byung-Hyun Kim and J.D. Durbin.

5. The highest ever used is #77, which was worn by Charles Brewer in 2013, and also by D.J. Carrasco in 2010. Mike Koplove and Peter O'Brien are the only others to have worn numbers in the seventies in the major-leagues. Though Gabriel Guerrero could set a new mark there - hie is currently on the 40-man roster, as the owner of #80

6. There seems to be a general aversion to single-digit numbers. 70% are unused at this point, with David Peralta (#6), Welington Castillo (#7) and Tuffy Gosewisch (#8), the only players to use one.

7. No Diamondbacks' pitcher has ever worn a single-digit number. The lowest is #12, currently occupied by Rubby De La Rosa. That's not uncommon: you'll very rarely see any pitcher with anything below ten; this may date back to the early days of numbers, when they were initially your spot in the regular batting order (hence the Babe's #3) - pitchers got the leftover, higher ones.

8. When Paul Goldschmidt's #44 is retired by the Diamondbacks - I'm boldly stating when, not if! - we will become the fifth team to have done so, following the Braves and Brewers (both in honor of Hank Aaron), the Giants (Willie McCovey) and the Yankees (Reggie Jackson). Anyone remember the last player to wear it before Goldie? That would be Aaron Heilman.

9. On the other hand, if Robbie Ray can eventually get his #38 retired at Chase Field, he would become the first such numbered player ever to see it so honored. Every other number between 1 and 47 has been retired somewhere. Outside of Robinson's, it's #20 which has been most retired, shut down by 10 teams, including the Diamondbacks, of course.

10. Perhaps the loneliest number of all? #69. Not just never worn by a Diamondback, only used by six players in all of major-league baseball history (including Bronson Arroyo for a bit) - for comparison, the numbers on either side have been worn by 52 and 26 players respectively. One of those was last season, however. I'm sure the Nationals' A.J. Cole had a wonderful time with hecklers on the road...

Bonus fact. The chart below shows the count of players wearing each number in the majors last season [note: if a player played for two different teams, they will be counted twice, whether or not they wore the same number. e.g. both #94's are the same person, Dalier Hinojosa, who played with it for both the Red Sox and Phillies] The most popular numbers across all of major-league baseball were 30, 50 and 56, each worn by thirty players, with the highest the #99 worn by the Mariners' James Jones. 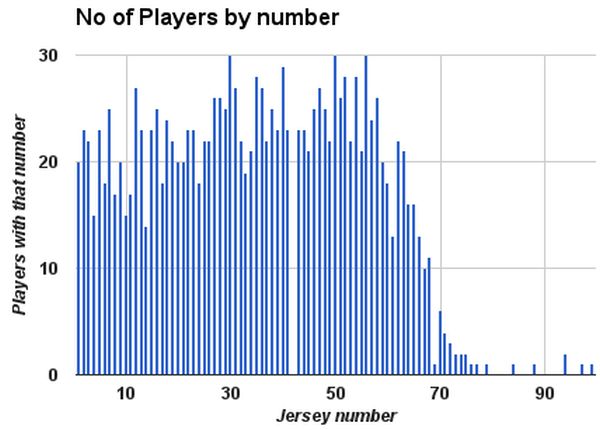