Over at MLB Trade Rumors, Bradley Woodrum wrote an article attempting to predict what pitchers are most likely to require Tommy John surgery. Perhaps surprisingly, it was not one of our previous victims who tops the list among Diamondbacks.

The entire article is well worth a read, as much for the methodology as the final analysis. What Woodrum and colleague Tim Dierkes did, was to come up with a model using the various factors that history has shown appear to have a correlation with past Tommy John procedures. Given those factors, it's possible to look at the currently active players, and predict which ones have most "red flags". Obviously, this is still a work in progress, and the presence of a pitcher high on the list, does not mean their arm is about to fall off. But this seems a virtually unique study, in that it's attempt to predict injuries before they happen.

Here are the factors which the model took into account and "proved to have the strongest, most consistent relationships with impending TJS":

It's also interesting to note which factors were not found to have a measurable correlation. These included overall pitch velocity; frequency of other pitches (there have been suggestions that breaking balls such as sliders put more stress on the elbow); altitude of home park (good thing too, since Chase is the second-highest park in the majors, albeit a long way behind Coors!); non-arm injuries, on the basis this might lead to compensation elsewhere, and injury history before the previous season.

Woodrum combined all the factors which correlated at a measurable level with TJ, and came up with a list of the top 10 pitchers who were most and least likely to require TJ this season. The least likely were uber-soft tossers like Eric Stults, Mark Buerhle, Bartolo Colon and R.A. Dickey - the last-named goes without saying, since he doesn't actually have a UCL in his right elbow. At the other end, leading the list of potential candidates was the Padres' Brandon Morrow, whose risk was deemed more than five times league average. Major factors were that he missed 155 days last year, throws a lot of fastballs and is young.

The only Diamondback to appear at either extreme was perhaps surprising: not Patrick Corbin, Matt Reynolds or even double-TJ survivor, Daniel Hudson. It was Archie Bradley, who came in eighth most-likely. In his case, It' was the significant amount of time lost last year to his shoulder, which is the biggest red flag. That required an assessment by Dr. James Andrews in July; although the diagnosis was nothing major, Bradley reporting "Some inflammation, some swelling, some irritation, but nothing structurally," he threw only 25.1 innings in the minors after that. As a result, Archie has quite a commanding lead over his other team-mates. Here's how they all stack up: 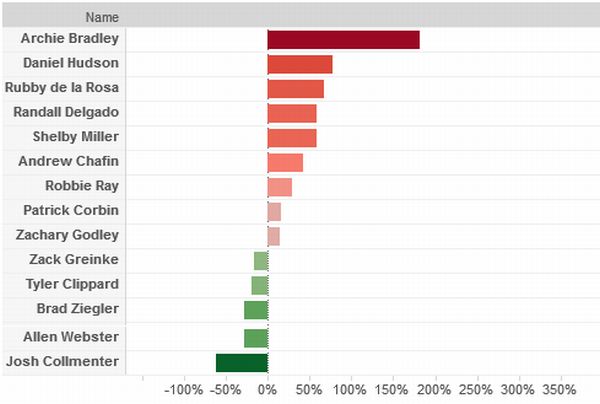 Not much of a surprise to see Hudson second, but pleasantly impressed that Corbin's risk is seen as little more than league average. Brad Ziegler's low-velocity delivery appears to help him, but it's Josh Collmenter who appears to be the closest we have to an Immunity Totem. Perhaps more pitchers need to throw axes in the woods. Also good to note, given the extremely large contract signed this winter, that Zack Greinke is also viewed by the model as below average for the procedure.