When Zack Greinke takes the mound on Opening Day 2016, it'll be something we never saw at all last season - a starting pitcher for the Diamondbacks whose age doesn't start with a 2.

Share All sharing options for: The Arizona Diamondbacks rotation: Logan's Run in action

For those who don't know, Logan's Run was a classic science-fiction film (previously, a novel) made in 1976, starring Michael York and Jenny Agutter. It depicted a society which kept population in check by killing anyone off when they turned 30, and sending hunters, called "Sandmen", to track down those who tried to avoid their fate. How you feel about that concept probably depends on which side of 30 you site, but it has been strangely applicable to Arizona recently. For the last 30-year-old man to start for us was all the way back before the All-Star break in 2014, when  Brandon McCarthy pitched in Pittsburgh on July 3; he was four days shy of his 31st birthday at the time.

Since then, it has been 237 consecutive starts, and 17 different pitchers [trivia: how many of them can you name? Answer at the end] for the Diamondbacks since any such wrinkly - sorry, Brandon! - started a game for the team. The oldest during that time-frame was Josh Collmenter, who was 29 years, 120 days when he made his last start on June 7 last year; the youngest was Archie Bradley, 22 years, 244 days old on his debut against Clayton Kershaw that April. Last year, every single Arizona start was made by a twenty-something pitcher, and I got to wondering how uncommon that was.

Finding out proved a bit harder than I thought, as the Baseball-Reference.com Play Index won't let you retrieve that information very easily. Still, nothing that a spot of hardcore mouse clickage couldn't resolve, so here are the results for all 30 major-league teams in 2015, in descending order: 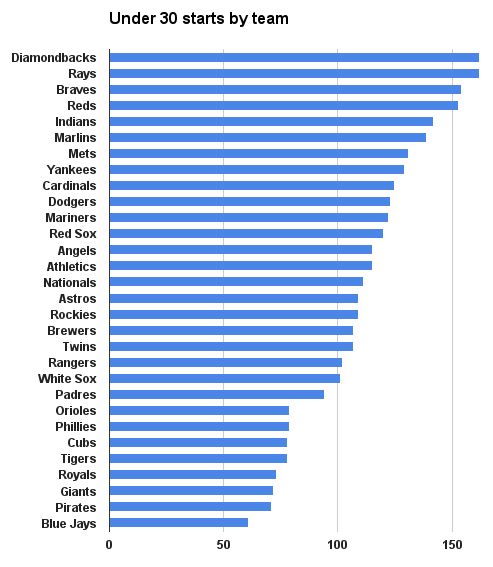 Interesting that our expansion siblings in Tampa were the only other team to match the feat of going the entire season without a single 30-year-old start. Clearly, there's an element of rebuilding going on among the teams that rely most heavily on youth. None of the top 20% (six teams) won more than 81 games last year, with the average among them being 74 wins. But then, the next four, making up the rest of the top third, all made it into the postseason, so it is possible to win with a mostly under-thirty staff  On the other hand, the World Series winning Royals did it with just 73 such games, relying heaving on relative veterans like Jeremy Guthrie and Edinson Volquez.

It's also interesting to track the youth trend on the Diamondbacks over the years. To that end, I also went back to 1998, and counted the number of under-30 starts each season on the team. The graph below shows the results of that: 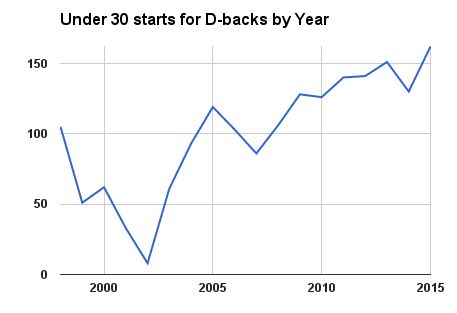 I note that Arizona has been at 130 starts or higher for each of the past five seasons. That's a sharp change from where we were back at the beginning of the millennium. Indeed, in 2002, the only Diamondbacks starter used who was under 30 for the entire season was John Patterson, who made just five starts (Brian Anderson made three before having his cake day). I don't know if this is part of an overall trend towards younger players. The median pitcher age (including relievers) in the National League this year was 28.4, compared to 28.8 years old in 2001, so it does seem possible.

More investigation needed though. I just wanted to throw this up here, having mentioned it in passing during this week's round table!