Yesterday, we dipped our toe into a prospect list from five years ago, and cherry-picked a few players who performed as expected - or didn't. Today, let's go full-on analyst.

Here are the top 100 prospects from Baseball America's list of five years ago, ordered by descending amount of bWAR. For bWAR, figures in bold are players who have not (yet) reached the major leagues; for 2016 teams, players in bold have been traded, moved, etc. since the original list. [Two players, in bold italics, have moved more than once and are back with the team they were with originally!]

Those 100 prospects have, to date, been worth a total of 422.6 WAR, for an average of 4.2 bWAR. However, that is extremely top-heavy: The top dozen are worth 216.3, more than lower 88 combined. Also what stands out, just how good Mike Trout has been. He has been worth 37.9 WAR; the first 16 players taken in that season's draft have been worth 50.2 WAR combined. That ends with the Diamondbacks' first pick, Bobby Borchering, last seen toiling away in High-A ball of the Tigers' organization. Sob... Though #17 was A.J. Pollock, who is second to Trout among production out of the top 60 picks that year. Which is nice. Here are the rankings in visual form: 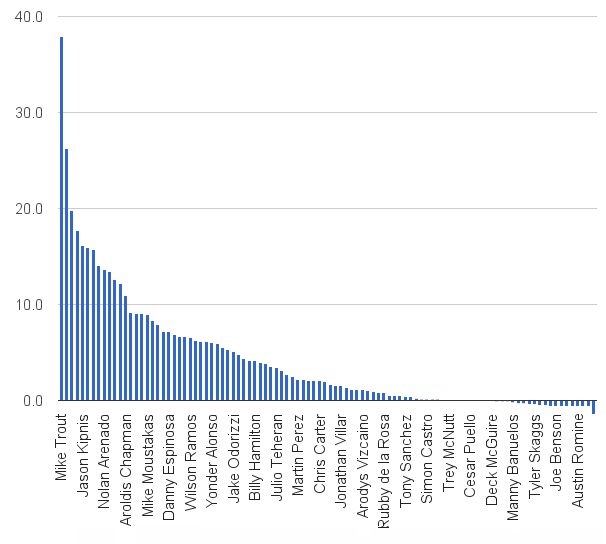 13% of them have been worth more than ten wins; 20% between five and ten wins; 38% less than five wins; and the remaining 29% either have not reached the majors, or have been worth at or below replacement level. And, don't forget, these are the players considered the top 100 prospects already with teams, in the game at the time. Now, it is true that five years may not be enough to go from draft to productive major-leaguer - though it didn't seem to stop Harper and Sale, chosen just eight months before this list was drawn up, and who have outperformed everyone bar Trout. But it's clear that even elite prospects have a significant change of failure.

This isn't to say that the results are completely random. If you group the rankings into decads (that's shoe's two-bit word for the day!), the higher rankings do tend to be more productive than the lower ones. The chart below shows the total WAR from each of those groups of ten prospects, and you can see that the top ten are the most successful. However, once you get outside the top thirty, the level clearly flattens off a good deal, and one future everyday player can make a lot of difference. That's how the seventies group does so well: it contains Nolan Arenado and Anthony Rizzo, both ranked in the top ten overall. 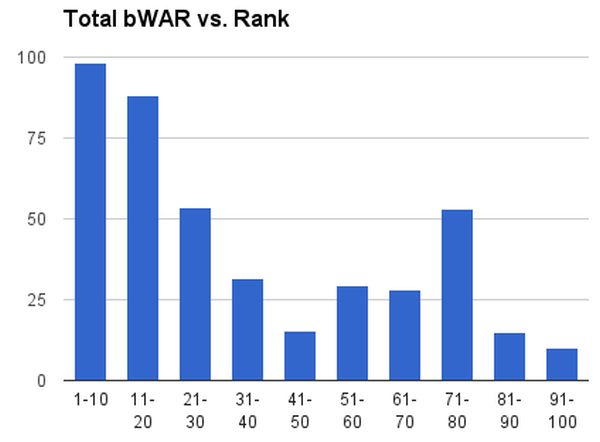 Something else that stood out is how much movement there has been. A full 60% of these players - and, again, these are the best prospects in the game at the time - have been dealt over the five years since. However, there is a sharp escalation here as we move down the list of production. The top twenty by WAR, the figure is only 30%; the next twenty, it increases to 45%. Over the last twenty, a full three-quarters are no longer with the same franchise as at the time of the list. This likely makes sense: if a prospect produces at the major-league level, a team will obviously be much more inclined to hold onto them.

Finally, I thought it would be interesting to take a look and see how the top 100 prospects stacked up by team. So, below are the numbers on each team then and now.

Hard to detect any clear conclusion. Sure, the Royals took their nine names on the 2011 list, and won the World Series in 2015. But the Astros seem to be doing well enough too, and they had absolutely nobody on the original list, and the only guy on it they have now, is sub-replacement level Jonathan Singleton. Only the Rockies and Yankees control more of the players currently, than the five owned by the Diamondbacks. There are also 11 players not currently employed by a major-league team: seven are free-agents, one is in Japan, two appear to have quit the game entirely, and one (the Mets'  Jenrry Mejia) got himself a lifetime ban on Friday.