The disappearance of the three-pitch inning

It's fading from baseball quicker than the complete game.

Share All sharing options for: The disappearance of the three-pitch inning

Jim, I wonder if our pitchers have had any 3 pitch innings?

Seems very unlikely. But, getting 3 outs on 3 pitches would be very rare, indeed.

When I started digging, it initially didn't appear to be very rare at all. Indeed, only 24 games into our franchise's history, we saw Jeff Suppan become our first Diamondbacks pitcher to deliver a three-pitch inning, in the third against the Florida Marlins on April 25, retiring Edgar Renteria, future Diamondback legend Craig Counsell and Gary Sheffield with his first offering. indeed, he was one batter away from retiring six consecutive batters with his first pitch, since in the second inning, Dave Berg and (another future D-back) Livan Hernandez both went down on the first offering, before Cliff Floyd proved positively glacial, taking a whole four pitches to make his out.

On that basis, I wasn't too surprised to locate another example less than three months later, on July 12 of our rookie season, with Brain Anderson the low-effort pitcher. He retired Pete Harnisch, Reggie Sanders (yep, still another future D-back!) and Chris Stynes on three pitches. Barely five weeks further on, Gregg Olson became the first Arizona reliever to make quick work of the opposition,. mopping up in the ninth inning on August 18 of a 7-1 defeat to the Expos, taking down Orlando Cabrera, Ryan McGuire and Vlad Guerrero [though the latter swinging at the first pitch is not exactly a shock]

There was a break in 1999, but things restarted, with a vengeance in July 2000, as Randy Johnson had not one, but a pair of three-pitch innings, in consecutive starts. First, on April 14 - coincidentally, also against Hernandez, now with the San Francisco Giants - he got Rich Aurilia, Doug Mirabelli and Livan for his third inning. Though, let's face it, merely putting the ball in play against 2000-era Big Unit is a victory in itself. Six days later, he got a welcome three-pitch fifth inning at Coors Field, with Todd Helton, Terry Shumpert and Neifi Perez the victims. So, through our first trio of seasons, we had a full hand of three-pitch innings. 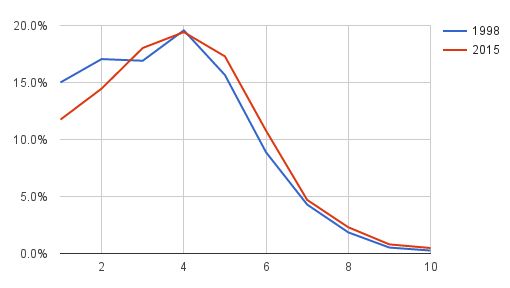 It's not just us though. Across the entire National League pitching staff, 1998 saw fifteen three-pitch innings worked. The last year for which stats are readily available, 2014, there was just one, as there had been in 2013 - and there were none at all in 2012. My first thought was that it's because at-bats are lasting a lot longer these days, but that turns out not really to be the case. While there is a slight uptick in average pitches per NL plate-appearance between 1998 and 2015, it has only gone from 3.67 to 3.80. Similarly, the "first-pitch hack" has decreased, fractionally, from 31,8% of PAs to 30.2%.

You can see the results in the chart above, which plots the length of plate-appearance in pitches, for both 1998 and 2015 appearances against the Diamondbacks [the last category is actually 10 and above - with 30 of those this year, and barely half that (16) in 1998, it wasn't worth slicing the data any thinner]. There may also be fluctuation caused by the different pitching staff, but both seasons, Arizona were somewhat below average by ERA compared to league average, so close enough for me] You can see the decrease now, particularly in one- and two-pitch PAs, with the difference being made up over the course of the longer at-bats, mostly through the sixth pitch.

It's apparently enough to make a significant difference. In 1998, 616 of 6,151 PAs ended in a first-pitch out, which works out at 10%, near as dammit. The pure statistical odds of three such happening in a row is about one in 996. Fast forward to this season, and there were only 461 first pitch outs in 6,257 PAs. That's only 7.4%, and the odds of three in a row jumps enormously, to one in 2,500. And it's worth noting, the "true" odds are likely higher in both cases, because the at-bats are not independent events: if you've watched the two batters before you both go down on the first pitch, you're probably going to take an offering or two. Something something momentum...

But never mind a three-pitch inning - how about a one pitch inning? Check out this line by Jeff Nelson from 1995:
1 IP, 0 H, 0 BB, 0 SO, 1 pitch, 1 strike
He came in with runners on first and second, and threw one pitch to Sandy Martinez, who promptly bunted into a triple-play.

For now, that remains the ultimate in economy, and it's hard to see how it could ever be surpassed. Yes, technically, a pitcher could come in with the bases loaded, and pick off the three base-runners to exit the inning without ever throwing a pitch [pitchers have got the W for a zero-pitch outing, most recently Alan Embree for picking off Nyjer Morgan, hahaha]. But I'm not going to hold my breath waiting for that to happen.