The 2015 Diamondbacks were the most right-handed group of hitters in team history, and it's likely they will be even more so this year. Is it a potential issue?

In 2015, the Diamondbacks had only 1,898 plate-appearances from the left-hand side of the plate. This was the lowest tally in team history, and it wasn't even close, with the second fewest being the 2,140 in 2007. In percentage terms, the figure was below one in three for the first time ever at only 30.2%, again well below the previous lowest of 35.1%. This was a sharp drop on the 2014 value of 44%, as the team lost the at-bats of left-handed hitters Miguel Montero, Gerardo Parra and Didi Gregorius. The graph below plots the percentage of plate appearances from that side, since the team started in 1998. 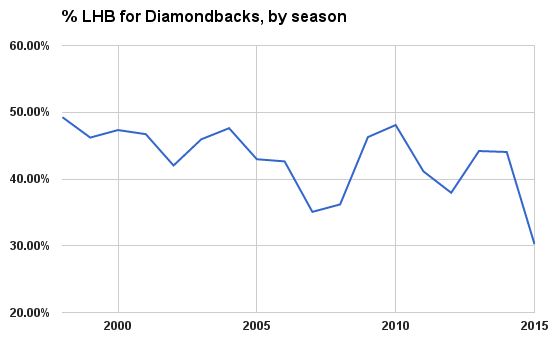 In 2015, the Diamondbacks had only five left-handed or switch hitters reach even fifty plate-appearances; just one team, the Pirates, had fewer than that. And the decline is a trend that shows no signs of stopping for the upcoming season, because most of those Arizona five are no longer with the club. Switch-hitters Cliff Pennington and Jarrod Saltalamacchia are now with the Angels and Tigers respectively, while left-hander Ender Inciarte was traded to the Atlanta Braves. Along with other, smaller factors such as Danny Dorn, the now-departed combined for almost half (47%) of that already record-low number of left-handed PAs.

There is some scope for new arrivals, of course. David Peralta may see a few more PAs, and if Jake Lamb is healthy and productive for a full season, he will get a couple of hundred extra. Some of the playing time Inciarte got will likely go to the left-handed Socrates Brito, though it appears the team intends for most of that to go to the right-handed hitting Yasmany Tomas. But outside of those, the only other non-righty position player on the 40-man roster currently, is potential backup catcher Chris Herrmann, and it's hard to see the 891 PAs lost during the off-season being anything like made up, with another record low probably resulting.

That isn't necessarily a bad thing, if you're facing a lot of left-handed pitching. And in at least one case for our divisional rivals, that would appear to be the case. If we look at the depth chart on MLB.com for the Dodgers, five of their top six starting pitchers are left-handed, with only Kenta Maeda going from the other side. However, if we look at the same top six for the rest of the teams in our division, we find the Giants and Padres have just one each (Madison Bumgarner and Robbie Erlin), While the Rockies do have two (Jorge De La Rosa and Chris Rusin), we should be beating whoever they throw out there, pretty much as a matter of course.

Is our excess of right-handed hitters going to be a problem? That probably varies from player to player. Paul Goldschmidt, for example, appears to be an almost equal-opportunity destroyer of pitcher souls. He has a career OPS of .981 against right-handed pitching, so would seem to be part of the solution rather than part of any problem. However, looking at likely "regular" players in 2016, and what they did against right-handed pitching last year, we see Yasmany Tomas, Aaron Hill, Chris Owings and Nick Ahmed all with OPS's of .673 or lower - we'll charitably write Brandon Drury's unmentionably low figure off as small sample size.

All told, the D-backs did seem to hold their own reasonably well against right-handed pitching last year, with an OPS fractionally higher than against left-handers (.739 vs. .736). However, the latter figure was depressed by the woeful issues of our left-handers to hit their counterparts, posting a collective OPS of .550. All told, the gap in platoon OPS for Arizona's right-handers of 64 points (.718 to .782) was pretty close to the National League average difference of 74 points (.683 to .757).

But with a heavily right-handed line-up, and not much opportunity to platoon, even in the games where we face a left-handed starter, we should probably expect to see a steady stream of right-handed relievers marching out of the opposing bullpen. With likely no more than two left-handers among our everyday starters, and a bench probably consisting of not much beyond Brito and Herrmann, the resulting platoon disadvantage may not be something Chip Hale is going to be able to counter very easily.