Hey, at least we managed to get some hits off Jake Arrieta. Suck it, Dodgers!

It was never going to be easy this afternoon. Even outside his no-hitter against Los Angeles, Cubs starter Jake Arrieta had an August for the ages, going 6-0 with an ERA of 0.43, and holding opposing hitters to a line over those 42 innings of .130/.196/.171. Basically, he made everyone he faced last month hit little better than a pitcher (that .367 OPS compares to a .329 figure for NL pitchers this year). On that basis, I suppose this afternoon was actually a success - or at least par for the course - because the Diamondbacks batted .148 against Arrieta in this one, going 4-for-27 with a double. Woo-hoo! But you won't tend to win when you have two at-bats all afternoon with a runner in scoring position.

We may as well discuss those in detail, since there isn't much else to talk about from today's game. The first came early, in the opening inning. Paul Goldschmidt came back from his paternity leave, and promptly took up where he had left off in his pre-fatherhood days, singling to right with two outs. David Peralta followed with another single, to put runners on the corners, and then swiped second-base to give Arizona two men in scoring position. Unfortunately, Jarrod Saltalamacchia was unable to come through in the clutch, going down swinging to become the first of Arrieta's seven strikeouts on the afternoon.

Salty was also involved in the second at-bat, this time providing it, with probably the hardest-hit ball by a D-backs hitter all day, which went over the head of the Cubs' center fielder, bounced on the warning track and ended up in the bleachers. This brought Jake Lamb up, but he grounded out - initially, he was called safe, the umpire saying the throw had pulled Arrieta off the bag, but on appeal, the decision was over-turned. The Cubs must have predicted this, when they choose not to challenge a call in the third, when Ender Inciarte caught a line-drive and fired back to first to double off (or, perhaps, not) the runner there.

Those were our only scoring chances against Arrietta, and since he went eight innings, there wasn't much chance to get something going against "anyone but Arrieta". We did get two hits off the Cubs' closer in the ninth inning, Ender Inciarte legging out an infield hit, and Goldschmidt picking up his second of the game. The problem is, in between them, A.J. Pollock hit into his 19th double-play of the season. One more and he'll be our first ever member of the 20/20 club: twenty stolen bases and twenty GIDPs. Can't be often a player leads his team in both categories, checking just other 20/20 members, the last in the NL was Brandon Phillips on the 2007 Reds, who had 32 SB and 26 GIDP.

Robbie Ray was... particularly Ray-esque this afternoon, and you can take from his outing more or less whatever you want. He struck out eight batters in only five innings, so was clearly dominating! He allowed two runs in five, which is decent enough. He took 96 pitches for those frames, so that continues to be an issue. He also walked three, and if his strikeouts are up of late, so are those free passes: Dividing his season into two chunks of nine starts, in the first, he struck out 7.53 per nine innings, and walked 1.97. Over the last nine, the same figures are 9.45 K/9 and 5.01. That's bordering on the Cahill-esque, suggesting a lot of movement, and not much certainty about where the ball is going.

This came home to bite Ray in the fourth when a walk in between a pair of singles loaded the bases for the Cubs without anyone out. I guess Ray does deserve credit for escaping the jam with only one run being allowed, on an RBI groundout - he then struck out the next two, and this might also have been a case where the Cubs' tactic of batting the pitcher eighth, worked against them. However, cleaning up your own mess is hardly praiseworthy. Ray also gave up a solo home-run in the fifth, and that was the end of his day. At least the bullpen didn't implode this time, Randall Delgado, David Hernandez and Daniel Hudson each tossing a hitless inning of relief.

Arizona actually outhit Chicago 6-4 in this one, with two hits for Goldschmidt. The problem was in part the walks - we took none at all, to the Cubs four, partly the fact Salty's ground-rule double was the only one of our hits that went for extra bases, and partly the home team doing a better job of bunching their offense in the fourth inning. Yes, it was a defeat; however, after the massacre which was yesterday, this was at least a competitive game, with the D-backs never more than a bloop and a blast from tying things up, even if neither seemed likely. With the team now having lost 10 of their last 13 games, I'll take my meaningless victories where I can find them, thank you very much. 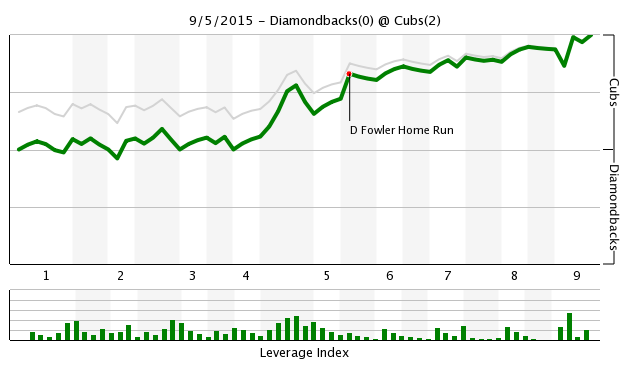 Couldn't even crack two hundred comments for this one. freeland1787 being the only person to crack twenty, ahead of JoeCB1991 and ford.williams.10. Also laboring into the weekend were: AzRattler, Clefo, GuruB, I suppose I'm a Pessimist, Jim McLennan, Makakilo, MrMrrbi, gamepass, hotclaws, onedotfive and shoewizard. Nothing received more than two recs, so I'm with-holding Comment of the Thread again. It may never be awarded until we win again, which currently seems like it could be quite a while. Series finale tomorrow, as we turn to Rubby De La Rosa to try and help us avoid the sweep.