Worst game of the year.

Share All sharing options for: Diamondbacks 5, Cubs 14: Will to live ebbing...

When Al at Bleed Cubbie Blue asked me to write a few paragraphs previewing the series, I praised the offense, pointed out how David Peralta was under-rated, and how well Welington Castillo had done since the trade. But the other side of the game?

Our pitching on the other hand is... Hey, did I mention our offense? It's really good! Look at all those shiny runs! Are you not distracted by them?

I'd like to thank the Diamondbacks for treating this afternoon's game in Chicago as a three-hour demonstration of the above point. Only twice this season had we conceded more than nine runs in a game. We conceded eight in a single inning here, on our way to a thumping defeat. The only other time since April 2011 that Diamondbacks have conceded 14 runs in a game was a 15-3 loss last September. And that was at Coors Field, so applying the usual 30% devaluation for all offense there, this one was probably more unpleasant. Not helping matters at all, a season high eight walks, and the Cubs didn't even need to bat in the ninth.

Admittedly, some damage was probably self-inflicted, considering that after Zack Godley revealed himself as a sleeper agent for the Cubs, none of the relief pitchers wheeled into the game by Chip Hale were on our Opening Day roster this season either. It felt like the late innings of spring-training, as both sides took the opportunity afforded by a meaningless blowout to rest some players. A.J. Pollock, Peralta and Castillo were all lifted, and we even got a rare sighting of the Lesser Spotted Rule 5 Catcher (Oscaratti Hernandezus). I'm sure Goldie would have joined them, if he wasn't still paternitying. Hopefully, he was catching up on much-needed sleep and missed this embarrassing display.

Things more or less sucked from the start, with Godley apparently pitching in blackout goggles, using sonar to locate the strike-zone. And, since he isn't a dolphin or related aquatic mammal, that proved problematic. Four batters in, with the bases loaded, we got Mike Harkey's eight millionth first-inning visit to the mound. Harkey, of course, knew just what to say in this tricky situation - though why he didn't just stay in the dugout and yell, "Hey, Godley! Throw some frickin' strikes!" beats me. The results on Godley's performance were par for what we expect post-Harkey visits: a bases-loaded walk. Then, just for variety, another bases-loaded walk. Six hitters faced, one retired.

"Good work! I'm so glad we had that chat!" With the bases still loaded, allowing only a sacrifice fly was something of an improvement. The second inning, Godley allowed just the one run on a lead-off homer; the third, he put up a zero. But any hope of an extended outing fell apart in the fourth, which started with a walk to the opposing pitcher, followed by a coaching visit to the mound, followed in turn by - and this is my unsurprised face - a two-run homer. With a sixth and final walk, Godley's day was done: 3.2 IP, 4 H, 6 R, 6 ER, 6 BB, 3 SO. He's the first D-backs pitcher to walk that many in a start of less than four innings since Dontrelle Willis walked seven in 2.1 innings, over five years ago.

Enrique Burgos got the final out, and the D-backs actually pulled back with four runs in the top of the fifth. They had got on the board in the fourth, as Chris Owings's RBI double scored Welington Castillo. And a Phil Gosselin RBI double brought home Ender Inciarte in the fifth. Perhaps there was a chance? Well, the bottom of the fifth brought an end to that, as the Cubs scored eight times. Probably, the highlight was learning something new. I'd always thought that after an error allowed a runner to reach, once you got to two outs, all subsequent runs were unearned. Apparently not. Seems you can start allowing earned runs again, if there's a pitcher change. Who knew? Well, clearly I didn't.

The Cubs sent 11 to the plate against A.J. Schugel and Silvino Bracho, all the runs scoring with two outs, and after a Nick Ahmed error. Schugel was charged with seven unearned runs. That's a pretty elite club. Only five other National League relievers in recorded baseball history have managed that in less than an inning of work, the last being Rod Nichols on the 1995 Braves. This performance today included a grand-slam, with Bracho allowing a two-run homer later in the inning - one of those runs was credited to him, However, I'm not sure if this run will count as unearned against the team. The penultimate paragraph here suggests otherwise.

That eight-run frame was the worst inning of the year, and made the score 14-2 against us after five innings. You will not be surprised to hear that I gave up paying attention at that point. The D-backs did restore a slight degree of respectability to the score, with a two-run homer by Jake Lamb in the seventh, and an RBI triple from Nick Ahmed, while the rest of the C-bullpen [Bracho again for the sixth, plus Keith Hessler and Matt Stites] kept the Cubs from scoring any more over their final three times up. So, we only ended up losing by slightly more than a pair of grand-slams. Gosselin had two hits and a walk, Lamb a pair of hits and Yasmany Tomas walked twice. 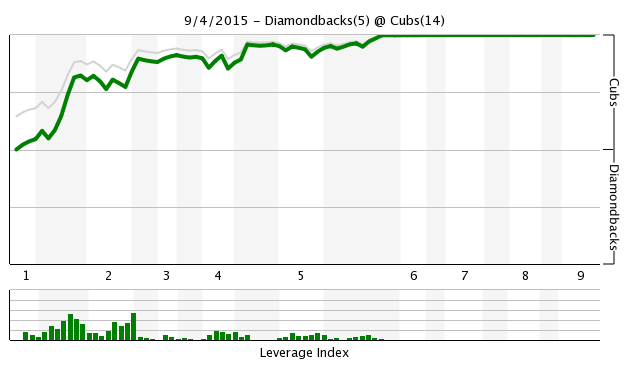 217 comments, which is likely about 216 more than this game deserved. hotclaws actually led the list - been a while! - with JoeCB1991 and onedotfive close behind. Also poking the corpse with a stick were: AzRattler, Dbackguy, DbacksSkins, Diamondhacks, Fangdango, GuruB, Jim McLennan, MrMrrbi, circa4, gamepass, overkill94DT, piratedan7, preston.salisbury, ryeandi and since_98. Nothing got more than a single comment, however, so no Comment of the Thread. This is one we'll all want to forget. 1/10, would not watch again. Not that I actually watched much of it to begin with.

We'll hope for better tomorrow - let's face it, can hardly go much WORSE - with Robbie Ray on the mound  It's another 11:20am first pitch, so be aware.