Diamondbacks 4, Rockies 9: In which Hessler sucks

Though in his defense, was not the only reliever to do so. For the B-bullpen was out in full effect for the Diamondbacks tonight. And that's "B" as in "bad."

Share All sharing options for: Diamondbacks 4, Rockies 9: In which Hessler sucks

Early on, this looked like it was going to be another Coors Field slug-fest. Three of the first four Diamondbacks up reached, the only out being a sacrifice fly off the bat of A.J. Pollock, on the 11th pitch of his at-bat, that gave Arizona a 1-0 lead. 24 pitches in, Jon Grey had retired one batter, but Welington Castillo was obviously jonesing for some Chicago pizza, and opted to hurry thing up by hitting into an inning ending double-play. Chase Anderson's first started the same way (first two on, then a sacrifice fly to score a run), but then got worse, courtesy of another home-run by Nolan Arenado, to give the Rockies a 3-1 lead after the first inning.

The first three Arizona hitters in the second inning reached base as well, narrowing the gap back to one, as Chris Owings drove in a run with a single. Hopes of more, with two on and no outs, were rapidly snuffed out, as Anderson didn't just fail to get the sacrifice down, he bunted into a double-play, killing the momentum. Both starting pitchers settled in after that point for a bit. The Diamondbacks threatened somewhat in the fourth, beginning with Brandon Drury's first hit in the major-leagues. This was immediately followed by Owings getting his second hit, this one a perfect bunt. Anderson did get his sacrifice down here, but Ender Inciarte grounded out, stranding two in scoring position.

Anderson was also doing better on the mound. He was scattering a fair number of hits, though in more than one case, it seemed like the Rockies were going out and getting them, rather than Anderson missing his spots. And he was solid out of the stretch, holding Colorado hitless with runners in scoring position. The nearest they came to scoring was with two outs in the fifth, with a runner on second, when a wild pickoff from Anderson sailed into left center, allowing the runner to reach third. However, Anderson retired the dangerous D.J. LeMahieu, and that was the end of his night: five innings, three runs on eight hits, but no walks and five strikeouts.

Arizona took the lead in the sixth, beginning with Jake Lamb hustling out a double. He easily beat the throw, but there was some doubt as to whether he stayed in contact with the bag while sliding through it, and the Rockies challenged the safe call. After some nervous moments - I thought Lamb had been tagged between his hand leaving and his leg touching it - the call stood. One out later, Chris Owings ripped the ball down the left-field line, just outside the event horizon of Nolan Arenado, for a game-tying double. He stole third, and after a walk to pinch-hitter Jarrod Saltalamachia, Inciarte delivered an RBI groundout for a 4-3 lead.

With Anderson gone, Randall Delgado came in an worked a scoreless sixth. The seventh proved a lot more thorny; three batters in, Delgado was trudging off the mound with the bases loaded and no outs. Keith Hessler came in to face Carlos Gonzalez. This was surprising, in that I didn't even know Hessler had been called back up: the D-backs, in their infinite wisdom, did not appear to have sent out a press release announcing the fact. What was less surprising, was the grand-slam Hessler allowed, inflating his ERA to 16.88. That's the highest ERA by any pitcher matching Hessler's nine appearances since the start of the century. Oh, and I mean the twentieth century.

That was, to all intents and purposes, the end of the game. The last 11 Diamondbacks to come to the plate went down in order, and Matt Stites allowed the Rockies to pad their lead and Gonzalez's stats, with a two-run homer in the eighth. It was an ugly, ugly night for the bullpen: Delgado, Hessler, Silvino Bracho (brought in after the slam) and Stites combined to allow 10 hits and six earned runs over three innings of work; even allowing for Coors Field, that's not a good line. On the plus side, Owings had three hits, with two hits for David Peralta and Lamb, while Drury reached twice on a walk and that first hit. 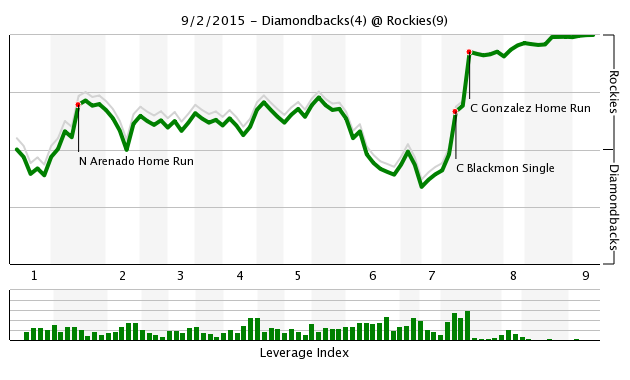 Hessler, with the bases loaded, against CarGo, with Arenado on deck.

Oh, yes we are! [Ah, the great British pantomime...] It's an off-day tomorrow for the Diamondbacks - haven't had one of those in a VERY long time. Perhaps we can think about the fact that the Arizona bullpen has taken the loss in each of our last four defeats. We reconvene on Friday, in Chicago, where Zack Godley will be taking on his old team. But plenty of stuff for tomorrow, so don't forget to check back then. At least the bullpen can't blow a lead on Thursday...