Of course, the pitcher with a 21.00 ERA takes a no-hitter against us into the sixth inning.

"I will be absolutely brokenhearted if we don't have a winning record "
-- Tony La Russa, November 2014

It wasn't the only time La Russa expressed that sentiment, re-affirming it three months later: "I don’t have a crystal ball; I just know we’ll be competitive. I’ve said before, I’ll be brokenhearted if we don’t have a winning record this year." But tonight's loss was the 81st of the season, and guarantees instead that the team will go its fourth consecutive campaign without finishing above .500. The recipe for this particular loss was not perhaps the one expected. Between Robbie Erlin and Jeremy Hellickson's last starts - 14 runs allowed in a combined four innings of work - you would be forgiven for expecting a slugfest. Didn't happen, as the starters allowed just one score over their 13 frames here.

The Diamondbacks had failed to get a single hit after A.J. Pollock's grand-slam last night, and that particular sickness continued unabated at Petco this evening. Ender Inciarte reached base on a dropped third strike to lead off the game, but Robbie Erlin then faced the minimum the rest of the first and second times through the Arizona order, with what can only be called ruthless efficiency. There were even very many hard-hit balls, it was much more a buffet of routine groundouts to the infield and lazy fly-balls to the outfield. The only base-runner was Jeremy Hellickson, who somehow managed to draw our only base on balls - the second walk of his professional career - and was erased on a double-play.

Just as St. Penelope was begin to loosen up in the SnakePit bullpen, the potential embarrassment of being the first team ever no-hit by the San Diego Padres was averted, as Inciarte crunched a pitch just fair down the left-field line, and turned it into a triple as Justin Upton lost a game of handball in the corner by the wall. Unfortunately, that was with two outs in the sixth innings, and Aaron Hill was unable to put Arizona on the board, striking out swinging. A.J. Pollock singled in the seventh, but Paul Goldschmidt hit into another double-play, our 130th of the season. A double from Chris Owing in the eighth and a Hill single in the ninth was the rest of the D-backs offense tonight.

Given the almost complete lack of support, Jeremy Hellickson actually did a good job of keeping us in the game, matching Erlin zero for zero through the first five innings. He wasn't quite as dominant - the fifth was his only clean frame - but it did the job. You never got the sense it was entirely sustainable, however, and so it proved in the sixth inning. A lead-off double advanced to third on a wild pitch, and one out later, the Padres got a fly ball just deep enough to the outfield for the runner to beat Inciarte's throw. It was perhaps closer than it initially looked, and Chip Hale challenged the call, but it was upheld after a fairly lengthy review from New York, giving San Diego the lead.

A walk and a final out, and that was the end of Hellickson's night. He went six innings, allowing a run on four hits, with two walks and five strikeouts. It took him 103 pitches to get there, and lowered his ERA on the season to 4.60, with one more start likely to come, next weekend against the Astros. Meh. Matt Reynolds and David Hernandez combined on a scoreless eighth inning, but Josh Collmenter had a poor outing, allowing two runs on three hits, before Silvino Bracho tidied up the mess. Those insurance runs proved entirely necessary, as Craig Kimbrel duly Kimbrel'd, and Arizona were shutout for the seventh time this season.

Despite Tony's love-pump being ground underfoot, it's still clear this team is significantly better than last season: I think lasting until Game #155 for the heartbreak, is a good deal further into the season than most of us expected. It's seventeen games later than the 81st loss arrived in 2014. However, this was certainly an uninspired performance against a pitcher who had shown little success in either the major- or minor-leagues this season, and it also gives the Padres the season series against us. We'll have to do a good deal better at the plate tomorrow afternoon, if we are not to leave San Diego in a tie for third- and fourth-place. 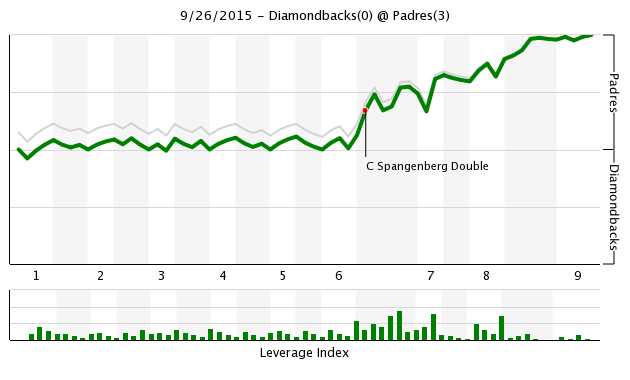 Not often the losing pitcher is our best performer of the day, but Hellickson probably deserves it more than any of the hitters. shoe and myself were tied for busiest commentor, which must be a first, with JoeCB1991 in third spot. Also present: AzDbackfanInDc, Clefo, GuruB, I suppose I'm a Pessimist, Makakilo, MrMrrbi, NumberOneIanKennedyFan31, asteroid, hotclaws, noblevillain and thunderpumpkin87. Comment of the Night is more along the lines of a Public Service Announcement from shoewizard.

Hey guys....when you have time

Remember, vote early, vote often! Join us tomorrow for the last road game of the 2015 season, which sees the two headed beast of Jhouzack Godcin - there's a Star Wars name, if ever I heard one -  take on James Shields.