It is more blessed to give than receive... Particularly when hitting grand-slams are concerned.

There's a certain pleasing symmetry about this game and the last one played by the Diamondbacks. Yesterday, we lost 6-3, the margin of victory provided by a grand slam. Today, we won by the same score, again, a home-run with the bases loaded proving the difference maker. Having experienced both sides of the coin, I can say without fear of contradiction that hitting grand slams is an awful lot more fun than allowing them. And we've had rather too much experience of the latter this year: Chris Heisey's for the Dodgers was the eighth grand-slam allowed by Arizona, and the fifth in September alone

In contrast, A.J. Pollock's large salami in the second was only the second by the Diamondbacks all year, following in the footsteps of David Peralta's against the Phillies on August 11. While the offense in general has improved, that's only half the tally of grand-slams recorded by Arizona in 2014. Though overall, our production in bases-loaded situations has improved: last year, we had an OPS of .624 and 71 runs scored there, but we came into tonight fifty points higher and already having scored eighteen more runs. It's certainly fortunate that Pollock came through when he did here, because we wouldn't get another real opportunity.

Indeed, if you'd told me we'd go 7.2 consecutive innings without getting a hit, I wouldn't have put our chances of winning this one very highly. Fortunately, by the time those 7.2 consecutive innings started, the Diamondbacks were 6-0 up. The offense peaked - and I mean that in a sense which should be reported to your doctor if it lasts for more than four hours - with Pollock's first career grand-slam, which came with one out in the second inning. 23 of the next 24 Arizona batters were then retired, the streak of futility interrupted only by Jake Lamb's walk with one out in the sixth. Were our hitters content to phone their at-bats in the rest of the way? I'd like to think so.

Not that it was entirely a cakewalk the rest of the way, as Rubby De La Rosa was... alright, I suppose. He walked more batters than he struck out, by a margin of 3-2, but held the Padres to two earned runs (and one unearned, courtesy of a throwing error by Welington Castillo) over 5.2 innings on four hits. San Diego chipped away at the six-run deficit, with single tallies in the fourth, fifth and sixth, the last coming after De La Rosa had left the game, having been relieved by Randall Delgado. That also brought the tying run to the plate, in the shape of left-handed pinch-hitter Brett Wallace, but Delgado was equal to the threat, striking him out.

That was the home team's last hurrah, as the tying run never got anywhere past the on-deck circle for San Diego the rest of the way, and that came with a lead-off single against Brad Ziegler in the ninth, after Delgado and Daniel Hudson had worked perfect seventh and eighth innings. Two ground-balls and a pop-out later, Ziegler had notched his 28th save of the season. He has a shot at becoming the sixth D-backs closer to notch 30 saves in a season [one guy did it twice: how many of the other five can you name?] Not bad, considering he didn't notch his first save until May 21, in our fortieth game.

Perhaps forgotten in the fuss was that the D-backs scored a pair of runs in the first inning. After Ender Inciarte led off with an our, the next four hitters all reached base, including an RBI single by Pollock, and an RBI double from Paul Goldschmidt. But that was just a warm-up for the second inning, where Brandon Drury was hit by a pitch, then Inciarte and Phil Gosselin each singled, setting the stage for Pollock's 19th home-run of the season. One more, and he'll become the first Arizona center-fielder to reach 20 home-runs since the glory days of Chris Young, who did it four times, between 2007 and 2011. But Young never hit even .260 for a season: A.J. is now at .318.

All told, it was nice to kick off the final road series with a win, and after all that early offense, it was mostly a stress-free experience, as the Fangraph below shows. Gosselin and Pollock each had two of the Diamondbacks' six hits, which was the same number as the Padres. We just got all our six hits, over our first 10 at-bats! The win puts us two games ahead of San Diego in the battle for third-place in the NL West, with eight games left. If we can get a split of the two remaining contests, that would leave us in the driving seat, as we'd be two up on San Diego with only six contests left. 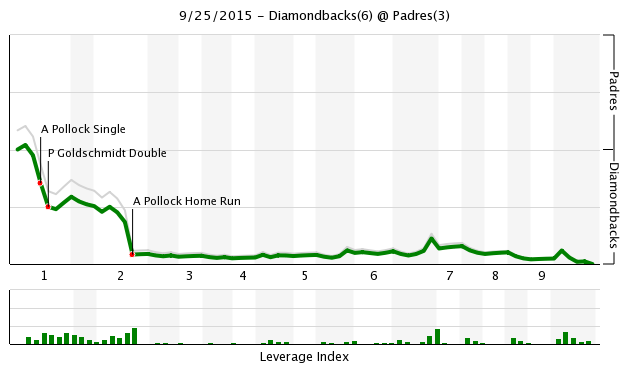 GuruB led the commenters, pipping myself and NumberOneIanKennedyFan31. It was busy early, but after Pollock's homerun, chatter dropped off markedly, on the likely basis we had this one well in hand. Still, also present were: Makakilo, MrMrrbi, Rockkstarr12, SongBird, Sprankton, asteroid, freeland1787, gamepass, hotclaws, onedotfive and shoewizard. Guru gets comment of the night for his one. Obvious context is obvious. :)

Does Taco Bell put Salami in their Tacos? Because AJ just did that!

Tomorrow sees Jeremy Hellickson make his penultimate start of the season, as we look to seal the series win, and keep Tony La Russa's heart from breaking for another day. First pitch then is 5:40pm, which is certainly preferable to all these post-7pm games, as far as recapping is concerned!