Share All sharing options for: Diamondbacks 1, Giants 5: More Than Baseball – Field of Dreams

I'm @Angry_Saguaro, guest of Jim, who allowed me to report on the D-backs game (albeit without MLB approval). Before I do so, I want to introduce Brett Greenwood, a kid who graduated from my Alma Mater. Lifting weights, he had a brain aneurysm, was given up for dead, and last night - led the Hawkeyes on to the field. No matter who you route for, this kid is truly an inspiration - here is the video

The D-backs (Field of Dreams) Iowa boy on the mound today - hoping to help the Dbacks sweep the defending Champs on their turf. Hellickson's last start could be compared to the Iowa State Fair floor remnants after a parade of cows. Tim Hudson, the Giants starter and baseball's active win leader, absolutely owns the Dbacks.

I have to admit I was going to watch a little NFL and the D-backs at the same time - expecting the worst for the D-backs and couldn't give a shit about football. But, Hellickson looked absolutely great so, I focused on the D-backs. The first 5 innings, the D-backs game was a pitcher's duel with the D-backs/KTAR announcing team totally focused on the Cardinals vs. Cubs game.

Then in the bottom of the 6th inning the Giants scored, breaking up their 27 innings of un-scored runs and Hellickson was designated for the bench. Randal Delgado came in to throw 4 balls to Duffy putting him on base allowing Posey to hit a pitch into the bay - Champs 4, defending #1 draft pick team 0. Thank you KT.

Noonan pinch hit in the 7th and the Caddy Shack crowd at Mad Hatters Brewery went wild. Best part of the game so far.

Parker for the Giants, who looked lost until his bat in the eighth, drove in a run for the Giants... Nobody really cared at this point and the Giants evidently don't associate with Taco Bell 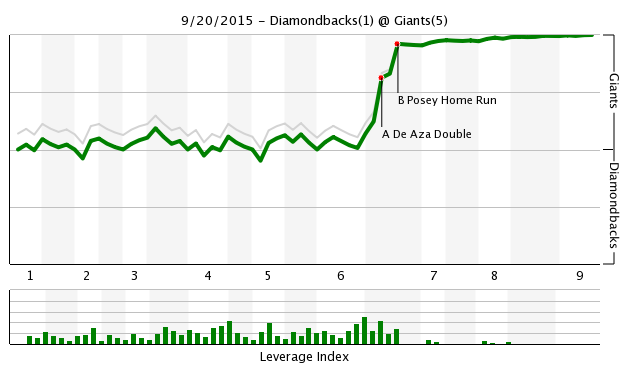 [Click to enlarge, at fangraphs.com]
Wielding a saguaro: Ender Inciarte, +10.6%
Sitting on a saguaro: Welington Castillo, -15.2%
Bumping into a saguaro: Randall Delgado, -14.8%

A late surge [and, I admit, some encouragement!] got the GDT safely into three digits, with the top three being onedotfive, hotclaws and songbird. Also managing to tear themselves away from the NFL, at least briefly, were Angry_Saguaro, AzDbackfanInDc, GuruB, I suppose I'm a Pessimist, Jim McLennan, Makakilo, MrMrrbi, NumberOneIanKennedyFan31, gamepass, nolanriley13 and shoewizard. Comment of the thread to hotclaws for her poetic response after onedotfive mentioned you could hear a pin drop after Peralta's ninth-inning home-run:

dislodged by the weary flap of a pelargic bird’s wing drift effortlessly into the cool ,blue waters of the bay.

The loss does eliminate the Diamondbacks from post-season contention, but that's about 125 games later than last year [note: number may be approximate], so we'll take it. The Dodgers lost, so their magic number remains at seven: this means the only way they can clinch the series against us, if by sweeping the four-game set and if the Giants lose all three games they play in San Diego. Since we're facing Greinke and Kershaw on Wednesday and Thursday, I recommend we take care of that particular business sooner, rather than later! Jhoulys Chacin starts for the Diamondbacks in Los Angeles tomorrow night, with a first pitch of 7:10pm.

Thanks to Mr saguaro - or may I call him angry? - for his guest recappage!