There may come a time when the Giants score against us again. Today, however, was not that day.

Today's the 11th time in team history that we've thrown consecutive shutouts, and the second occasion this season - we previously did so on July 25-16 against the Brewers. But you would have to go back further to find a case where the shutouts were quite so decisive. Only once has the team allowed fewer than ten hits over the shutouts: that was in 2011, when we blanked the Nationals on June 3-4, on a total of seven hits, with four walks and 15 strikeouts. That's two fewer hits and the same number of walks as we managed today and yesterday in San Francisco, but also two fewer K's than the 17 managed. So, this could arguably be considered our best back-to-back pitched games of all time.

Certainly, Corbin continues to be pitching like an ace again. Seven shutout innings this afternoon, and this is his fourth consecutive start without issuing a walk. The last time we had a starter do that was Javier Vazquez in 2005, who went seven straight games and fifty innings. I kinda expected Curt Schilling to have done something similar, but his longest such streak was five games, in 2002. Anyway, over his last five starts, Corbin has thrown 31.1 innings, allowing 29 hits and five earned runs, with a K:BB ratio of 25:2. It has, unsurprisingly, been a process to come back from Tommy John, but everything indicates that, health willing, he can be an ace next season.

Admittedly, this latest performance came against the Giants, who looked a tired, defeated and sorry bunch again this afternoon: it's clear they have now given up entirely on any chance of defending the World Series title. Starter Mike Leake was gone after three innings, to be followed by former D-back Yusmeiro Petit, whom we actually slapped around pretty well for once, tagging him for five hits in two innings of work, though they led to just the one run. Such was the way: generally, when you get 17 hits in regulation, you expect to score more than four runs - that's the same number we got against LA when we beat them 12-4. But today, all but one of our hits were singles.

That's another, albeit somewhat twisted mark set today: most hits with one or fewer going for extra-bases. The previous mark was fifteen, and you have to go back more than a dozen years for that, to August 2003. We started the game off with fifteen consecutive singles, before Jarrod Saltalamacchia broke things up, doubling to center with one out in the eighth inning. The hit parade begin with three singles in the first, ending with a David Peralta RBI, though probably inevitably, that was followed by Saltalamacchia hitting into the statutory required double-play. Still, three more singles and a walk followed in the second, we were 3-0 up, and never looked back.

Unlike yesterday, when the sides were a combined 0-for-12 with runners in scoring position, the teams today did get some clutch hits. Well, the Diamondbacks did, anyway - the Giants were 0-for-5. It certainly helped that until the ninth inning, all of those at bats came with two outs, minimizing the chances for any damage. Corbin only had two such plate-appearances over his seven innings, and generated a pair of ground-balls to end the threat. He finished strong, striking out the side in the seventh to leave at exactly 80 pitches, with five hits plus five strikeouts, and likely one of his top three performances of the season.

Unsurprisingly given the number of hits, quite a few gaudy lines here. All three of our starting outfielders. Peralta, A.J. Pollock and Ender Inciarte had three hits games, the Arizona outfield going a combined 9-for-15 with two walks and three stolen bases (all of them coming in the sixth inning, when Matt Cain was pitching in relief). Both of those free passes went to Pollock, who thus reached base five times. Jake Lamb had two hits and a walk, and Chris Owings a pair of hits. Every starter had a hit, even Corbin, who helped himself out with an RBI single in the fifth, only to blot his copybook by trying to advance on the throw, and getting thrown out at second.

Still, considering everything else Corbin did right, that hardly deserves more than a minor demerit. The team ran their record to 8-1 in San Francisco, and a win tomorrow afternoon would give us more road victories in a single season against one opponent than the team has ever managed. Even if they've hardly played like it, doing so against the reigning World Series champions would certainly be a nice trophy to take into the winter, and sweeping them on the road would perhaps also leave them with some fear of the Diamondbacks to carry into 2016. 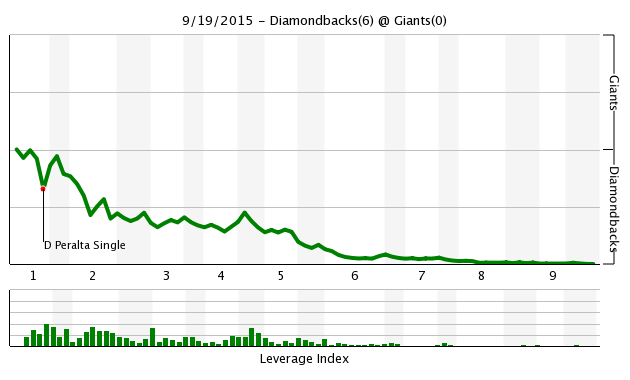 Not a bad Gameday Thread with AzDbackfanInDc  leading the numbers, ahead of the long-absent and welcome return of Rockkstarr12, with freeland1787 in third. Also enjoying the silence of the Giants were: AzRattler, GuruB, Husk, Jim McLennan, JoeCB1991, SongBird, asteroid, gamepass, hotclaws and onedotfive. Comment of the thread to onedotfive:

It started with a small leak, and turned into a mutiny

We go for the sweep tomorrow, and see how much further we can extend the shutout streak. I know that, sooner or later, someone on the Diamondbacks is going to allow a run to the Giants. I want that pitcher, whoever they may be, to know that I am going to be pretty pissed at them. Tomorrow, it's Jeremy Hellickson and I have to say, based on his last outing, I'm putting the chances of three consecutive shutouts somewhat below the proverbial snowball in hell. I'll settle for the sweep.