Rubby De La Rosa and four relievers completed a two-hit shutout of the San Francisco Giants, with Paul Goldschmidt driving in one of our runs and scoring the other.

Pitching duels are a bear to recap, because they are basically a stream of nothing much happening, with batters being retired, one way or another, and that's rarely a joy to write about. Of course, if it's a no-hitter or perfect game, that then eventually becomes something in its own right, But otherwise, it's the baseball version of Waiting For Godot: you're left trying to make that nothing much seem interesting. A runner in scoring position becomes a thing to cherish and dissect, offering the possibility of an escape from the tedium of a string of zeroes.

Rubby De La Rosa was pretty good for about 3.2 of his 5.2 innings, though once again, the pitch-count proved perilously high, De La Rosa taking 104 pitches to get that far. The problem tonight was the walks: four of them, against five strikeouts, with the last one an intentional pass to Buster Posey, completing a trifecta of walks in the frame which loaded the bases for the Giants with two outs. That was the end of Rubby's night, as he passed that mess on to Andrew Chafin, who got the Juvenile Okapi to ground-out. But it certainly didn't hurt that De La Rosa allowed just one hit in his outing, a solid single through the right-side of the infield with one out in the fourth.

That put two on with one out, but Rubby regrouped nicely, striking out St. Buster and the Okapi. It was the third time this year a Diamondbacks' starter has allowed one hit in a game, following Chase Anderson on June 12, also against San Francisco, and Archie Bradley (remember him?) back on April 11 versus Los Angeles. The latter was not dissimilar, with four walks in his outing as well, which only lasted one out longer than De La Rosa's. Interestingly, both of those games also ended in two-hit shutouts (1-0 and 6-0 respectively), but I guess that kinda goes with the turf.

However, the Diamondbacks weren't having much better luck against Madison Bumgarner, though did have a scattering of chances. A.J. Pollock and Paul Goldschmidt singled to put two on with one out in the first, but after that, we sent the minimum to the plate until the fifth inning. Then, Yasmany Tomas lofted a perfectly placed ball that appeared almost to swerve past first the center-fielder's despairing dive, then the right-fielder's, into Triples Alley for a seeing-eye three-bagger to lead things off. Of course, I doubt anyone was surprised when Brandon Drury struck out on a pitch well out of the zone, and Nick Ahned popped out, leaving De La Rosa to strand Tomas on third.

This was one of those times were you wondered if that missed opportunity was going to come back and bite the Diamondbacks in the butt. However, they were more productive in the sixth, with A.J. and Paul again at the heart of proceedings. Pollock led off with a single, and one out later, Goldschmdt drove the ball down the left-field line. The left-fielder's glove never even touched the ball, and it rolled all the way to the outfield wall, allowing Pollock to motor around from first, with Goldschmidt ending up on third. For once, the contact play worked out, Welington Castillo hitting a hard ground-ball, but Goldie beating the throw home to score, and give us a 2-0 lead.

Goldie's RBI double with one out in the top of the fifth was the final hit of the game for either team, with the D-backs and Giants combining to go 0-for-12 with runners in scoring position on the night. Nine of the last eighteen outs recorded were by the K, including Randall Delgado striking out the side in the seventh, Daniel Hudson working a perfect inning with one K in the eighth, and Brad Ziegler finishing things off with back-to-back strikeouts, after allowing a one-out single to St. Buster. However, it took a phenomenal leaping catch by A.J. Pollock at the wall to preserve the shutout; it's a grab we may well revisit in a few weeks, when we discuss Play of the Year:

It was the Diamondbacks tenth shutout of the year, and remarkably, the fourth of the season in AT&T Park. We are now 7-1 with an ERA of 1.48 over the eight games there this season. It also gives us the 2015 series over the Giants, being 10-7 up with two games left. This will be the first time we've won the season series against San Francisco since 2008. Pollock and Goldschmidt each had two of our five hits, with Tomas providing the other. However, with the Dodgers' victory tonight, their magic number is reduced to eight, increasing the chances of them potentially having a chance to clinch against us next week. 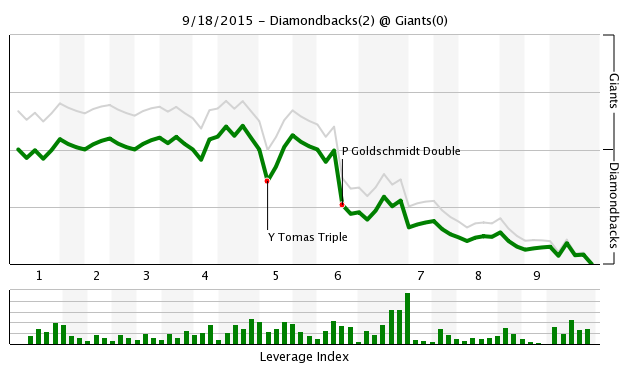 A pretty light GDT. You'd think some people had better things to do than watch a meaningless baseball game between a pair of teams with little left to play for. freeland1787 was well out in front, ahead of myself and JoeCB1991. It might have been closer had Firefox not crashed on me. That's my excuse, and I'm sticking to it. Also popping in: Clefo, GuruB, I suppose I'm a Pessimist, Makakilo, MrMrrbi, ford.williams.10, gamepass, hotclaws and onedotfive. Six comments received recs. Four of those were to do with football, one was about the arrest of a Freeway Shooter suspect and the sixth concerned the Dodgers-Pirates game. Yeah, CotN withheld, I think!

Patrick Corbin starts for the Diamondbacks tomorrow, going up against Mike Leake. Plumbing puns will be flowing like water, I'm sure. Bear in mind, it's an early afternoon game, with first pitch scheduled for 1:05pm.