The Rise of the Pitching Position Player

On Tuesday night, Leury Garcia and Alexei Ramirez became the latest position players to come into a game and pitch, each tossing a scoreless inning for the White Sox. If you think you've been seeing this a lot lately... You have.

Share All sharing options for: The Rise of the Pitching Position Player

Position players pitching is a joy that's perhaps unique to baseball. No matter the score in an NFL game, you're never going to see a punt-returner play quarterback. Much like knuckleballers, seeing a hitter pitch appeals to the secret conceit fans have that "anyone" could play the game - even if the "anyone" is this case is still throwing the ball 30 mph harder than you or I could [well, I, certainly] It can even take otherwise forgettable disasters and make them memorable for good cause, none more so for D-backs fans, than Mark Grace's relief appearance in September 2002, which included him imitating team-mate Mike Fetters, with his snap-glare at the hitter.

Emergency mop-up isn't a concept which is particularly new. The earliest example I've found dates back to 1914, when George Perring of the Federal League's Kansas City Packers came in to get the last two outs of the first game in a double-header against the charmingly-named Buffalo Buffeds. Later that same year, future Hall of Famer Tris Speaker came into a 10-4 blowout for the Red Sox, allowing a run on two hits. He's not the only resident of Cooperstown to pull emergency duty on the mound: others, including Jimmie Foox and Ted Williams, have done so. [Both came in to close out the first half of a double-header, with the game well out of reach]

But it's something which appears to have taken off in recent years, although it's a little hard to analyze the numbers of position players who have pitched. While Baseball Reference does have a handy check-box on its Play Index pages for pitching stats, "Typically a position player," it considers a player's entire career to see if he qualifies as a position player. Most obviously, this means that all Babe Ruth's appearances on the mound are regarded as such, even though for the first half-dozen years, he was a regular starter. Hell, he's 3-0 with a 0.87 ERA in the World Series, including a 14-inning, complete-game victory.

This means that when you're counting position players pitching, the yearly totals can get skewed. For instance, a quick check shows that this year's tally of PPP's (position players pitching) was blown past by 2003 and 2004. However, in both years, the numbers were heavily skewed by one man: Brooks Kieschnick; indeed, in 2003, he was responsible for all except one of the 43 such cases. But if you filter out anomalies like Kieschnick, along with players who have switched position, such as Jason Lane and Rick Ankiel, the recent rise in PPP's becomes clear. There have been 26 such this year, a remarkable rise, considering there were none at all as recently as 2006. 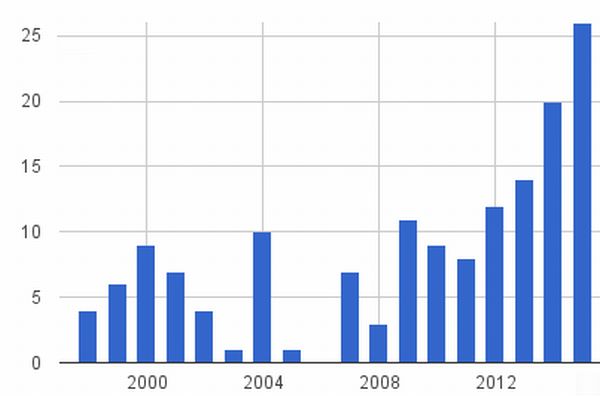 This has led to some startling moments in the past couple of seasons. On May 22 last year, Danny Worth became the first Detroit Tiger position player to throw a full inning in over eighty years - the Detroit starter that game is now a Diamondback, Robbie Ray. Worth then also became the second Tiger position player, two days later. Or, probably even more striking was a game last month, where position player Ike Davis faced pitcher Jason Garcia - only, it was Davis on the mound! This was also an American League game between Oakland and Baltimore, so what a pitcher was doing at the plate to begin with escapes me. Garcia walked, so we were clearly in some alternate universe.

Tuesdays double-barrel action from the White Sox was remarkable too, not least because it took place in September, when teams have expanded rosters. It clearly wasn't enough, as the Pale Hose used two position players as pitchers in a game for, according to Elias, the first time since 1902. However, my favorite of the season has to be SnakePit favorite Jeff Francoeur, who became the first National League position player in five years with a multi-inning outing on June 16, when he worked two frames for the Phillies against the Orioles [The last, Joe Mather, now manages for us in Missoula. It's all connected...]. Admittedly, this was in part because the Philadelphia bullpen had left their phone off the hook.

The main justification for a PPP is to save the bullpen from punishment in a game which you have no hope of winning. We see this is we look at the 26 occasions this year: twenty of them were in contests where the final margin of victory was ten runs or more. The narrowest gap was six runs, created by the Cubs David Ross [in his second appearance of the season!] on July 26. He had a ninth inning to remember, coming in with a 4-11 deficit, and retiring the Phillies in order, before homering to lead off the bottom of the frame. Ross, you may remember, hit his first career home-run in 2002, off Mark Grace. Like I said: it's all connected...

There have been occasional exceptions, typically when a game goes deep into extra innings and a manager has run out of credible pitching options. The results tend not to be pretty: since the star of the seventies, only four "true" PPP have won the game, most recently John Baker of the Cubs, who tossed a scoreless 16th inning against the Rockies. More common are losses: the Diamondbacks have benefited from this twice in recent history, beating Casper Wells of the Phillies in August 2013, and turning the tables on former Arizona PPP Josh Wilson in June 2009, courtesy of a Mark Reynolds three-run homer, both victories coming in the 18th inning..

Here are the box-scores for all 26 PPP this year, through the start of play on Wednesday.

What I find interesting is, that isn't actually as bad as I expected. If you add those appearances all up, here's what you get as a combined record:
2015 PPP: 25.0 IP, 31 H, 21 R, 13 ER, 9 BB, 8 SO, 4.68 ERA
Clearly not brilliant - walking more hitters than you strikeout is never a good thing, and so the FIP is likely going to be poor. But the bottom line is a 4.68 ERA over 25 innings of work. That is exactly the same as Enrique Burgos has given the Diamondbacks this year to the same point, and 34 relievers in the majors this year have as many innings and a higher ERA. That includes some high-profile names, including closers such as Fernando Rodney and Neftali Feliz.

Now, there is a case that these PPP are working in extremely low-leverage situations, and with victory all but assured, the batters that they are facing are not exactly bearing down. However, against that, it seems the case that their temporary status may cause exactly the opposite. Said Brad Ausmus, "You're supposed to hit the guy because he's not even a pitcher. If he gets you out, you look like a fool." But that said, some of the PPP actually have decent raw "stuff": For instance, Drew Butera topped out in an appearance last season with a 95.1 mph fastball. That's 2.6 mph quicker than Josh Collmenter has ever thrown a fastball.

This season has seen the end of some lengthy holdouts by other franchises. The Braves had not seen a PPP since 1989, before Jonny Gomes last month. Before this year, the Nationals/Expos' last PPP was 1990 - Junior Noboa, now our vice-president of Latin Operation - but they've used two, coincidentally both against the D-backs. Now, the longest streak without a PPP belongs to the San Francisco Giants, whose last such was Greg Litton in 1991. The Diamondbacks have also not indulged in the new trend, though our streak is a relatively modest six years: Josh Wilson, who tossed a scoreless inning of a 5-13 loss against the Cincinnati Reds in May 2009.

With the Padres, Mariners and Athletics also resetting their "This has been a position player pitching free franchise for X games" counter, that's now good enough for fourth place, behind only those Giants, the Angels (1993) and, surprisingly, the Rockies. You'd think, given the offensive environment in Denver, it would happen about every other series, but Colorado has only used two in franchise history, the last being Todd Zeile in 2002. Since that game, Rockies' pitchers have conceded more than fifteen runs on 16 occasions, though in their defense, not all of those contests were blowouts. Still, you have to wonder if the idea has crossed their managers' minds.

As for the Diamondbacks, everyone remembers the Grace experience, but his was not the only one - and, as we'll see, Mark was arguably the least successful PPP. Here's the info for all of them:

As you can see, Grace is not just the only Diamondbacks' position player to give up a run, he's the sole PPP even to allow a hit. All told, our PPPs have a perfectly respectable line of one run over five innings, for a 1.80 ERA, on one hit and four walks with one strikeout. This may again suggest the "not trying" theory outweighs the "hate to be retired by a hitter" school. But another thought strikes me: hitters are going up against someone on whom there is absolutely no scouring report or prior information. Half the time, it appears, the PPP himself doesn't know what he's going to throw, so how can the hitter? It perhaps gives a similar advantage to that of throwing a knuckleball.

It's kinda fun to speculate who the Diamondbacks might use, in the event of a PPP being needed. The obvious candidate would be David Peralta since he, as has been well documented, was originally a pitcher in the Cardinals' organization. Catchers also seem quite commonly used, due to their strong throwing arms; let's face it, Oscar Hernandez hasn't done much else to justify his wages [his last start was August 6!], so maybe we should see what he has got on the mound. But seeing as we didn't resort to a PPP in the game against the Cubs earlier this month, where we were twelve runs behind after five innings, maybe it's something Chip Hale just doesn't want to do.