Diamondbacks 3, Dodgers 4: How the SnakePitFest was Lost...

Such fun. If only the same could be said for the actual on-field play, because for 26 outs, it couldn't.

Share All sharing options for: Diamondbacks 3, Dodgers 4: How the SnakePitFest was Lost...

The number of attendees was thinned slightly on the day - we'll not name the person who was, and I quote, "Burned out by Jerry Garcia Memorial Disc Golf Tournanent"! - but I think it's safe to say that those who attended SnakePitFest 2015 had a thoroughly entertaining time of it. I was first to arrive at the Rose & Crown, which was a bit of a mixed blessing. On the down side, their draft beer wasn't yet cold, and they were also out of Pilsener Urquell, so I had to make do with Heineken. On the plus side, it meant I got to enjoy their extremely good value breakfast fry up, with scrambled eggs, bacon, sausage, toast and potatoes ($4!) without anyone to see me pigging out.

It wasn't long before other citizens did start to show up, however. Clefo, the Asteroids, SongBird, the Ford.Williams.10's and EmilyLovesTheDbacks were all in attendance, with the socos showing up a little nearer game time. Let's just say, I wasn't the only one tempted by the breakfast (though I was the only one drinking Heineken). The conversation was wide and free-ranging, and may occasionally even have discussed the Diamondbacks, though I would not be prepared to swear to that. I think the Cardinals might have been mentioned too: I'll cut people some slack on that, just this once, since it is Week One...

We made our way to Chase Field, my entrance being delayed only by the security guard's insistence that I turn on my tablet, to prove it was not, presumably, a Nexus-shaped explosive device. Oh, and apparently, a mere boot-up screen is not sufficient to prove its legitimacy., it has to go into full-on operational mode before it passes muster. I feel so much safer knowing that, don't you? There were a lot of Dodger fans in attendance, maybe 30% or so, but mercifully, they appear largely to have been segregated off, with the highest concentrations between 1st-base and the foul pole. If Chase could just ensure they entered and left through special exits in future, that'd be great...

Then the game started, and everything kind went downhill for the next 8.2 innings or thereabouts. As yesterday, the very first Dodgers batter of the game came around to score, though I guess it's an improvement that Patrick Corbin didn't allow a lead-off homerun, just a double. The only out he got of the first four LA hitters was the one who put down a sacrifice bunt, but he did escape with just the one run allowed. That kinda set the pattern, with the Dodgers having runners in scoring position each of the first four innings, Corbin scattering eight hits. Fortunately, the lead-off double was the only one for extra bases, and he also walked none, so only one further run scored.

Corbin did finish strong, retiring the last seven batters faced, his day ending after six innings of two-run ball, with four strikeouts. That took him 84 pitches, which is right in line with the norm for his outings: seven of his 13 starts since coming back have involved a pitch-count somewhere in the eighties. It was also the ninth time in those outings that Corbin has been charged with two earned runs or fewer, which even in his abbreviated outings - getting through seven full innings just the once - is grounds for optimism. He's about the only starter whom I'm fully confident will be in the 2016 rotation at this point.

However, the Arizona relievers were unimpressive; Randall Delgado allowed two of the four batters he faced to reach, and bullpen white flag, Kieth Hessler, allowed one of the runners he inherited to score in the seventh, then a lead-off home-run in the eighth. But, woo-hoo! After spending about a month north of that figure, his ERA is back below ten. Silvino Bracho loaded the bases in the ninth, on a hit and two walks before escaping, but the overall line for our relievers was four hits and four walks over three innings of work. What's particularly galling is that the two runs allowed turned out to be the margin, though in defense of Hale that didn't exactly appear likely at the time.

That's because Zack Greinke was mauling the Diamondbacks. He had a no-hitter into the fifth inning, and had faced the minimum to that point, as our only base-runner, a Jarrod Saltalamacchia walk, was immediately erased on another double-play. If it seems like we have a lot of them, that's because we have; two more this afternoon brought our tally for the year to 120, already five more than last season. There's an outside shot the D-backs could lead the league in both double-plays and stolen bases, which you've got to think would be a unique achievement. Probably unlikely, given Billy Hamilton is back with the Reds though.

As well as our first base-runner, our first hit also came off the bat of Saltalamacchia, doubling to the wall in left-center with one out, but Jake Lamb and Chris Owings both struck out swinging. We had a chance to end the shutout in the sixth, as singles by Nick Ahmed and A.J. Pollock helped create a situation with runners on second and third for Paul Goldschmidt. We were a bloop from tying the game, but Goldie struck out for the third straight time against Greinke, firing his bat back towards the dugout afterward in frustration. Greinke has now fanned Paul 13 times, more than any other pitcher, and that's in just 28 PA. We need to get Timmeh to have words with him.

Going to the bottom of the ninth we were, courtesy of Hessler, 4-0 down, and after Pollock and Ender Inciarte both struck out, all hope seemed lost. By this point, myself, SongBird and the asteroids were the sole survivors of SnakePitFest, everyone else having fled, and we were rewarded for our loyalty by a walk to Goldie, a single by David Peralta and then, a three-run homer by Saltalamacchia. That turned off the chanting Dodger fans down the first-base line, like the water in Los Angeles. Jake Lamb went down swinging, but we'd made a game of it, forcing Kenley Jansen to throw 33 pitches. Where was all this patience over the first eight, which took Grienke only 93?

I guess, we "won" the series in terms of run differential, having outscored the Dodgers by a margin of 20-17, but moral victories are for losers. This was a reminder of the difference between an ace and an ace, with Greinke's ERA on the season now down to 1.61, and 18 of his 59 strikes were swinging ones. Salty provided almost all our offense, being responsible for six of the nine total bases, as well as one of the three walks. I don't think I really need to look at the Fangraph to see who will be our hero for this one. 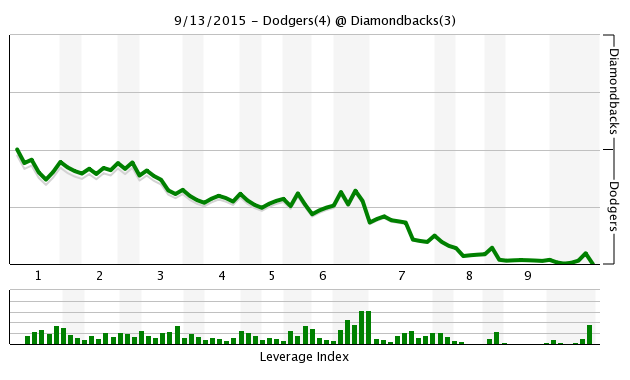 A perfect storm of silence for the Gameday Thread, with an apparent lost cause of a game, a deficit before we came to bat, plus Week 1 of the NFL all draining participation. When the top two participants are eight or more hours out of Arizona time, you know it's not normal... For hotclaws just pipped shoewizard, with onedotfive one further comment behind in third. Also present: AzDbackfanInDc, GuruB, I suppose I'm a Pessimist, Jim McLennan, JoeCB1991, Makakilo, MrMrrbi, NumberOneIanKennedyFan31, Xipooo and gamepass. Comment of the thread to hotclaws, for her creation of a new bit of SnakePit vocab

v. to hessle – to fail dismally

But, even in defeat, SnakePitFest remained a glorious endeavor, and many thanks to the asteroids for facilitating it, as well as all those who showed up to be part of it. It's was great fun as ever, hanging out, talking smack about everything [next year, the Taco Bell promotion needs to be the Socrates Burrito] and baaaah-ing loudly whenever Jake Lamb came to the plate. Which is, after all, what baseball is all about, isn't it? Only 19 games left in the season, folks: you'll miss it when it's gone...