Yeah, this was a pretty annoying game, almost the exact opposite of last night, and just about everything that could go wrong, did go wrong, for the very first batter...

I don't think we should let Rubby De La Rosa ever face the Los Angeles Dodgers again this year. The only start of his by Game Score which was (marginally) worse than this one, was the one on June 8 in California, where he allowed nine runs in five innings of work. Though I think if he had been allowed to hang around for five innings, the Dodgers might still be batting, because Rubby was pretty freakin' terrible tonight, being yanked without retiring a batter in the third inning, and being charged with six runs on nine hits. His combined line in four starts vs. LA?
Rubby De La Rosa: 17.2 IP, 28 H, 22 R, 22 ER, 5 BB, 18 SO, 7 HR, 11.21 ERA, 0-3 record

I wrote in the preview, "Something to keep an eye on tonight: Rubby is 6-0 when he doesn't give up a long-ball at all, 5-2 when he allows just the one home-run, and 1-5 when it's more than a single bomb." Well, you can update that last figure to a 1-6 mark, as De La Rosa wasted no time getting under way, allowing a home-run to the very first batter he faced. The second run allowed was somewhat unfortunate, coming on a virtually unplayable infield single. though I guess you can argue that the two hits which preceded it were all De La Rosa. And after a clean second, the Wheel O' De La Rosa was then sent bouncing off the highway into a ravine, courtesy of a five-run third.

He faced four batters there, and allowed four hits, the Dodgers falling a triple short of the cycle there. During this spell, LA manager Don Mattingly got a bit snippy when one of De La Rosa's offerings flew up and in to his young starlet Corey Seager, and came out to bitch at the home-plate umpire. Both benches were warned, though it was pretty much a clear-cut case of Sucky De La Rosa being sucky. That was the last batter of the night for Rubby, and he was replaced by Andrew Chafin, who gave up a long-ball of his own before the inning was over. So, Dodgers 7-0 up at the end of the third: might as well do something more fun - like drive down I-10 with a bullseye on the windshield of your car.

But, wait! Your 2015 Diamondbacks are made of sterner stuff than that. The Arizona offense was clearly doing their best impression of a Dodgers fan, because they didn't turn up at the park until the fourth inning. They batted around there, getting RBI from Nick Ahmed (sacrifice fly), Peter O'Brien (pinch-hit single) and A.J. Pollock (sacrifice fly). O'Brien joins Gerardo Parra and John Hester as the only two D-backs with RBI in each of their first two career games; And perhaps even more impressive, the last player before Peter O'Brien to start his career off with two pinch-hit RBI knocks was Scot Thompson for the 1978 Cubs.

Ender Inciarte then doubled, to put men on second and third, and Los Angeles opted to walk Paul Goldschmidt, and face David Peralta as the tying run at the plate. That was the end of Mike Bolsinger's night, but the left-hander brought in just about did his job, though Carl Crawford's speed in left-field certainly helped snare Peralta's line. Pity that, as it would have made a real game of it. However, the top of the fifth brought another immensely irritating moment, as Josh Collmenter got Seager to pop foul down the third-base line, only for a D-backs fan to reach clearly into the field of play and take the ball away from David Peralta. 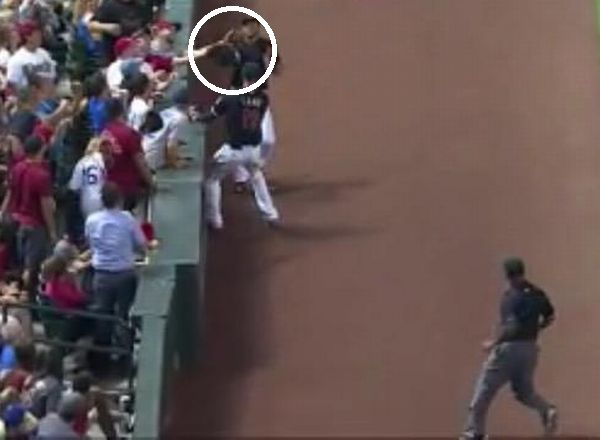 I don't know what pissed me off most:
a) The idiotic fan, supposedly on our side, stopping our team from recording an out.
b) The umpire, at bottom-right, not calling the blatant fan interference on the play.
c) Chip Hale, apparently asleep at the wheel, not bothering to ask for a review of an obviously blown call.
d) Subsequent shots of the smug douchebag, laughing and joking.
e) The team not enforcing their own rule and escorting said douchebag from the park.
Of course, Seager then homered off Collmenter, though at least it turned out to be a meaningless run in terms of the final result.

That was really about the end of the interesting moments in this one, as we didn't get the tying run any closer than the on-deck circle the rest of the way, Inciarte had an RBI single in the sixth, and Peralta homered for the fifteenth time this year to lead off the seventh inning - if only he had managed that in his previous at-bat... Matt Reynolds was the pick of the relievers pressed into action, tossing a pair of scoreless innings and getting five of the six outs he recorded by the whiff. One point of note: J.P. Howell got the win for his single pitch, when he retired Peralta in the fourth inning. I've seen one-pitch outings get s W, when they precedef a comeback, but not sure I've seen one awarded by the official scorer.

Inciarte and Goldschmidt each got a pair of hits, and Welington Castillo reached base three times, on a hit and two walks, but the Gurgling Vortex O' De La Rosa was just too powerful to overcome. That's a shame, because it's not going to be easy for the Diamondbacks to overcome the near-unstoppable force which is Grienke tomorrow afternoon. 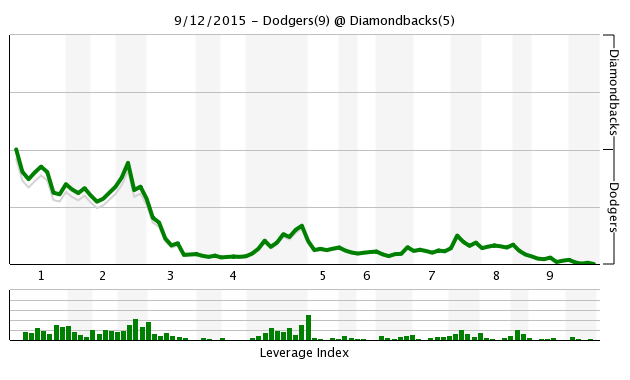 Over 450 comments for this one, not bad at all considering how awful it looked early on. asteroid led from the ballpark, followed by GuruB and JoeCB1991. Also present: AzDbackfanInDc, Diamondhacks, I suppose I'm a Pessimist, Jets Mets Devils Nets 15, Jim McLennan, Makakilo, MrMrrbi, NumberOneIanKennedyFan31, Oldenschoole, SongBird, freeland1787, gamepass, hotclaws, noblevillain, onedotfive, shoewizard and thunderpumpkin87. comment of the night to gamepass, albeit perhaps for stating the bleedin' obvious!

It's back at Chase for the last of the series tomorrow, and Greinke. But since the SnakePit will be in attendance, we will naturally be expecting Great Things...