Share All sharing options for: Diamondbacks 12, LOLgers 4: ALL the runs...

Well, that was pleasant, wasn't it? It's always nice when your pitcher gets to make the last out of the first inning. But it's even nicer when they also get to make the last out, your next time up too. For the Diamondbacks sent 18 men to the plate by the end of the second, with ten of them scoring, and every position player having at least one hit. It could probably have been even more, if Chris Owings hadn't TOOTBLAN'd on a contact play in the first. At the time, I wondered if there was any chance that blunder might come back to haunt us. In hindsight, I needn't have been worried, as the D-backs cruised to the biggest blowout since the Phillies' series.

Welington Castillo didn't so much get the party started, as drive the party bus into Chase Field, well-stocked with snacks and adult beverages. He pounded his 19th home-run with one out in the first, a three-run shot which also scored A.J. Pollock and Paul Goldschmidt respectively, who had singled and walked. Owings' RBI triple made it a four-run lead, but it was the second inning where the wheels fell off the Dodgermobile. Goldschmidt had a two-run homer, his 28th, Yasmany Tomas got a two-run double, and after the Los Angeles starter had been chased, even Nick Ahmed got into it, emulating Goldie with a two-run shot of his own.

10-0 up at this point, we could basically relax and enjoy the rest of the game. Which is more than can be said for home-plate umpire Jim Wolf, who took a wicked foul ball off the bat of Nick Ahmed, squarely to his noggin during that second. While he initially stayed in the game, he was clearly not right, and left the field between innings, the crew dropping to three men. Though, given the score at that point, they could probably have abandoned the home-plate position entirely and just let the crowd decide balls and strikes by popular demand from then on, without it significantly affecting the end result.

The resulting delay did seem to ice Robbie Ray, as he struggled in the top of the third, despite a double-digit lead. I don't think I've seen many 37-pitch innings, where the opposition fails to score. Ray loaded the bases on a hit and pair of walks, but left them stranded there, though the lengthy frame did mean he took the five and dive, taking 95 pitches to reach that point. Guess you can't complain too much about five scoreless innings of two-hit ball, though a  K:BB ratio of 2:3 is not something you want to have on any kind of regular basis. He certainly can't complain about a lack of run support, even if tonight's first two innings equaled the runs scored by Arizona over his last seven starts combined.

After that, it was mostly just a question of how wide the margin would be, and whether the team would complete the shutout. Enrique Burgos did his part with a scoreless sixth, then Matt Stites threw a pair of impressive innings with three strikeouts. The offense kinda slacked off a bit - and who can blame them - though still managed to tally an impressive 17 hits on the night. It was led by Nick Ahmed, who had a shot at the cycle in the sixth, coming up needing a triple, but "only" doubled, to end the night with four hits and nine total bases. He almost got another shot in the ninth, after review gave Brandon Drury an infield single, but Tomas hit into a double-play, leaving Ahmed stranded on deck.

Still, plenty of roses to go around the offense here. Ender Inciarte got three hits, Tomas and Owings getting two each, and Goldie adding to his franchise-record walk total in addition to his home-run. Half the starting line-up were out of this one by the end, with Pollock, Castillo, Goldschmidt and Owings all lifted. This did help lead to the majior-league debut of Peter O'Brien, who came on in the sixth inning, driving in Arizona's 12th and final run with an RBI single as a pinch-hitter in his first ever plate appearance. He became the fourth player in team history to do that, following John Hester (2009), Jason Conti and Alex Cabrera (both 2000).

Unfortunately, this did not quite manage to become the team's first 12-0 shutout since 2009. Allen Webster saw to that, though he waited until the last possible moment to do so, getting two outs and an 0-2 count in the bottom of the ninth before giving up a home-run - and a grand-slam home-run at that. .All four runs were unearned, however, as the previous batter had reached on a Jamie Romak error, albeit on a tough hop. But that hardly put a damper on the pleasures to be had in this one; it was a bit like finishing off a meal at a five-star restaurant, and the parking valet took slightly too long to bring your car round. 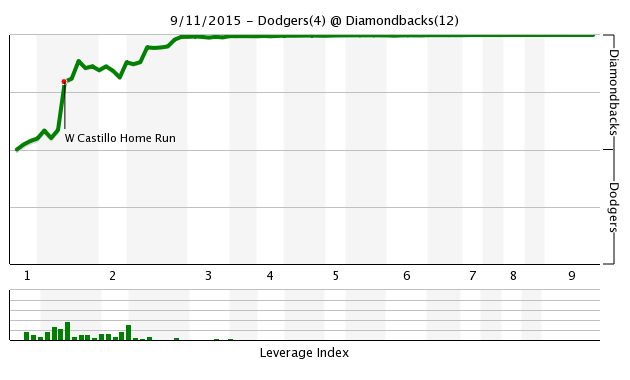 [Click for details, at fangraphs.com]
The Status of Liberty: Welington Castillo, +20.8%
The Terrorists: Ender Inciarte, -2.3%

Can't be many times someone has a three-hit game and still ends up negative... Still, that's the shape of Fangraph which I do not mind seeing at home. Unsurprisingly, one of the happiest Gameday Threads in a while, with approaching 500 comments. freeland1787, DbacksSkins and NumberOneIanKennedyFan31 were the top three, with others wearing their party hats, as follows: Clefo, Diamondhacks, GuruB, Jim McLennan, JoeCB1991, Makakilo, MrMrrbi, Oldenschoole, SongBird, asteroid, datr22, ford.williams.10, gamepass, hotclaws, makattack71, noblevillain, onedotfive, porty99, since_98, and soco. Comment of the night, with a staggering 15 recs, to Oldenschoole:

Disclaimer: my views are my own and do not necessarily reflect the opinions of the membership or management of the Snakepit nor that of Vox Media.

How much of a blow-out was this? I didn't even mind the wave. We'll see if there's any carry forward tomorrow, when Rubby De La Rosa starts for us.