The 2015 Diamondbacks are collectively throwing the ball harder than at any time since reliable data started being recorded.

We do not yet appear to have seen the first "official" 100 mph offering thrown by a Diamondback, as recorded by pitch f/X, but we have come close. While there have been park radar-guns which have reported three digits, the highest documented speed reached by an Arizona pitcher in the major-leagues this year is the 99.1 mph reached by Daniel Hudson on September 1, in the opening game of the double-header at Coors Field [Enrique Burgos, in case you were wondering, has topped out at 98.7 mph]. Still, when I checked the stats, I discovered that the average D-backs fastball of 92.8 mph, is the fastest we have had in the pitch f/X era, which began in 2007.

This probably doesn't come as much of a surprise, given the fondness for Tony La Russa and the new front-office for both acquiring power arms like Rubby De La Rosa, and for aggressively promoting them from within the organization, most obviously Enrique Burgos, who ended last year in High-A, but has now appeared 26 times this season at the major league level for Arizona. However, the increase is not something entirely due to the change in management. Over the years for which we have data, only once has there been a year-on-year decline in average fastball velocity: between 2010 and 2011, it dipped from 91.2 mph to 90.8 mph.

Otherwise it has been one-way traffic, with this year's figure now a full two miles per hour quicker than the average from just three seasons ago. That's because this is not just a Diamondbacks' trend, but one that applies across the entirety of major-league baseball. To show this, below you'll find a chart which plot average fastball velocity, both for Arizona (the blew line) and across the National League as a whole (yellow). Additionally, I thought it might be interesting to see how strikeout rates have changed over the same time, so those are also present for us (red) and the NL (green). For scaling purposes, K-rate is actually shown per 100 innings pitched, but it's the trend that matters. 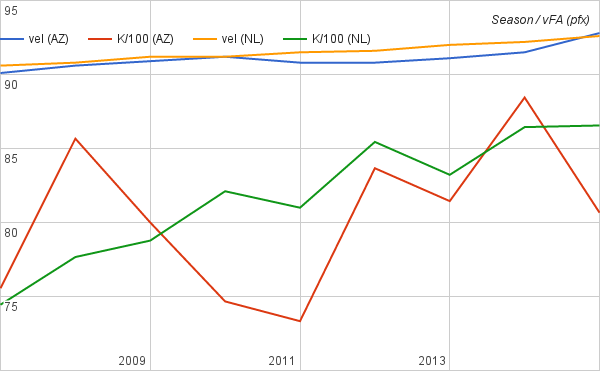 This shows both how average fastball velocity has inexorably headed in one direction; there has not been a single season where it has declined in our data set. But it does also show how La Russa's initiative has had an impact, for this is the first year where the Diamondbacks have been above the mean. The team is currently 9th in the majors, a sharp uptick from as recently as 2014, when they were ranked 24th. The Pirates, perhaps surprisingly, top the current charts, averaging 94.0 mph; for the all the firepower brought by Aroldis Chapman, the Reds are back in sixth, less than half a mile per hour faster than the Diamondbacks.

The overall trend in strikeouts is up; does that correlate on a per-team level with fastball velocity? That seems to be the case a lot more this season than last. Below, you'll find a chart that plots this year's velocity against strikeout rate, and there seems to be a clear correlation that which throw harder, do strike out more batters. The statistical correlation is 0.64, which is fairly significant. While this makes sense, what's surprising is that you don't find the same thing if you look at the same graph for last season. The best-fit line there is a lot flatter, and the correlation is much smaller, only 0.12

Looking specifically at the Diamondbacks, this season Hudson and Burgos are #1 and #2 on the list for the past nine seasons (min 20 innings pitched), with Matt Stites last season third. It would be great to have figures back to when the Big Unit was in his prime, and see how his fastball compared; Matt Mantei is another former Diamondback, reputed to have hit triple digits on the radar gun. Here are the top ten single-season marks for fastball velocity by an Arizona pitcher.

Obviously, it's entirely dominated by relievers, as you would expect, who can throw harder simply because they are not expected to last much longer than a single inning. For comparison, here are the top 10 starting pitchers over the same period, again with a minimum of 20 pitches.

This is perhaps notable: three current members of the 2015 rotation are found in the top ten, and if Bradley comes back, and Hudson is indeed being seen as a starting option for next year, that would bump up the velocity numbers for our rotation even further in 2016. That's an area where La Russa has perhaps made the biggest impact, with our starting pitching this season averaging 92.4 mph, up 1.8 mph from last year; the increase for relievers is little more than half that, going from an average of 92.4 mph to 93.4 mph. It definitely seems its an aspect of the new D-backs philosophy, and I wonder if this might play into who we will look at on the market this winter?