Randy Johnson's #51 will never be worn again by a Diamondback, and will fly forever at Chase Field, alongside #20 and #42. It was pretty much all downhill from there, unfortunately.

I got to Chase a little after 2:30 pm, and parked in our usual spot - I was expecting it to be much busier that a normal game, but I was able to walk straight into the park. I think the early opening perhaps made a difference, and the fact that the T-shirt giveaway was to all fans in attendance rather than a specific number removed any particular need to arrive early if that was your goal. So, headed up to the Draft Room, where I was joined over the following while by (in order of appearance) SongBird, shoewizard and shoewizard Jr, and imstillhungry95. Beers were drunk, nachos consumed, baseball discussed:and a fine time was had by all.

We were all in different areas, so split up around 4:15pm to get to our seats. The warm-up was a screening of the MLB Network show, Randy Johnson: The Big Picture, which I'd actually just finished watching myself that morning. The presentation started with introduction of both the past and present of the team - Jerry Colangelo + Joe Garagiola, and Ken Kendrick and Derrick Hall - and then Johnson was introduced. He came in from the D-backs bullpen in right-field, which was a pleasant surprise, as I was sitting two rows from the rail overlooking the 'pen! I was able to snatch the video below as he made his way to the presentation area at Chase [sorry it's a bit potato-y!].

The team gave him a Neal Peart drum-kit to mark the occasion; apparently one of only a handful in existence. Seems like Johnson likes to dabble, saying afterward, "I'm not a very good drummer so I just couldn't feel like I was worthy enough to have a drum kit like that in my house. But I will move my family room furniture to make room for that." There was a video montage of moments from his career, tributes from those with and for whom he played, and the unveiling of Johnson's #51 over in right-center field. [Maybe it's just my OCD kicking in, but seeing the numbers going 42, 20, 51, I have an urge to sneak up there and move Gonzo's to the front of the list!]

Randy's speech seemed more comfortable than the one he gave at Cooperstown, perhaps reflecting this was on "home turf". It covered similar themes, Johnson stressing he didn't want to make this about him, but about those who helped his career, in particular over the time in Arizona, obviously. In particular among the players, he singled out Matt Williams, saying he was the one whose mindset on game day was closest to Johnson's. Jay Bell, Tony Womack, Danny Bautista and Luis Gonzalez were also mentioned, along with just about everyone, from trainers to clubhouse attendants. He didn't seem to mention Bob Brenly though, which seemed kinda odd, if deliberate.

He left, to one last standing ovation, and the regular business of the day began - albeit 25 minutes late, a fact with which certain members of the SnakePit seemed rather unhappy! Things began brightly for Arizona, with the home team taking the lead in the first inning: A.J. Pollock just missed a one-out home-run, settling for a double, but still scored when David Peralta singled through the right side of the infield, to make it 1-0. For a while, it felt like the same kind of game as yesterday, with our starter being staked to an early lead, and then having to hang on to it the rest of the way, and Robbie Ray did exactly that through the first 3.2 innings.

However, if ever there was a sequence which showed baseball to be a game of inches, this was it. With two outs in the fourth, Marlon Byrd swatted a pitch down the left-field line that just landed fair in front of us, by the narrowest of margins. And the next batter, then deposited a Ray offering into the right-field bleachers. Just like that, the one-run lead had turned into a one-run deficit. Thereafter, it was largely a case of the D-backs kinda threatening, but not being able to get the clutch hit needed. Two on, one out in the foufth; failed to score. Two on, one out in the fifth; Paul Goldschmidt hits into an inning-ending double-play.

We had men on base in seven of the nine innings overall, but Peralta's single was our only hit with a runner in scoring position, over nine at-bats. Meanwhile, Ray allowed another home-run, but worked through six innings, giving up three runs on five hits and a walk with eight strikeouts. Pre-game shoe had said there were three things Ray needed to do to become successful. One was strike out more hitters (check!); another was avoid regressing on the home-run front.... Yeah, not so check on that one. I think the third was expand his pitch repertoire, and that seems a work in progress. Seemed a lot of sliders tonight; maybe that was his tribute to Randy Johnson?

Thereafter, there wasn't much of interest, in game terms. Addison Reed worked into trouble, then out of it, in part thanks to a nifty bit of fielding by Goldschmidt, defusing a first and third, no outs situation, by getting the guy at third caught in a rundown. We did see the debuts of Jamie Romak and Keith Hessler (above). Romak struck out looking as a pinch-hitter in the seventh, and Hessler worked a perfect inning in the eighth, though he has the ballpark design and David Peralta to thank, Joey Votto hammering one down the line to the cutout just by the bullpen where Peralta tracked it down. Just a few feet to one side, and Hessler's first batter in the majors would have homered!

David Hernandez allowed the third Reds home-run of the day in the ninth, and then it was time for the Aroldis Chapman show. You can virtually tell everyone was watching the pitch, then immediately looking at the radar gun: you could hear the gasp as the first pitch was 101 mph, and the next was 102. Yasmany Tomas struck out swinging - there's a surprise - but Aaron Hill did get a hit, before Jarrod Saltalamacchia and Chris Owings both came off the bench to now avail. So, not as good a contest as the Luis Gonzalez #20 retirement game, but it was still fun to hang with people - I also got to chat to both Rockkstarr12 and GuruB for a bit, so great to see so many familiar faces.

Overall, though, it's sad when the best thing to happen after the "Play Ball!" kid did his thing, was Racing Gracey finally getting to win. Racing Randy pulled over at the finish line and waved Grace through the tape, to the amazed cheers of the crowd. It was a fitting way to end the streak, which really ceased to have much relevance after Grace left the commentary booth and became a coach. 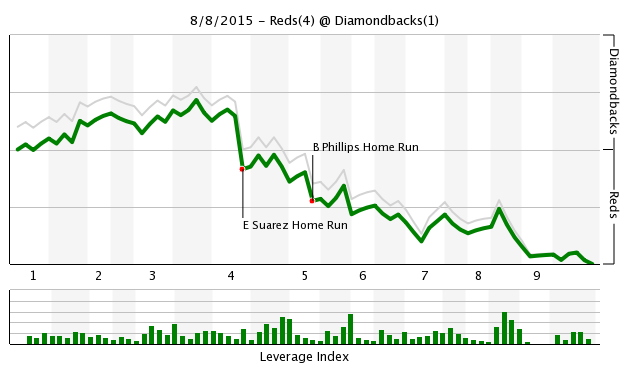 Rubber game of the series tomorrow, with Patrick Corbin starting for the Diamondbacks.