A thoroughly unconvincing display here, both sides showing why they're well below .500. The Oakland Athletics managed to suck less than the Arizona Diamondbacks.

Why not finish off an awful, 1-6 homestand with a loss in extra innings? Just what we wanted before heading off to Coors Field to play four games in three days: using six relievers in the futile pursuit of a potential victory. There was an awful lot to be irritated about here, with a bunch of plays that cost the D-backs: it's likely no exaggeration to say that if we had played sound, fundamental baseball, this game wouldn't have even gone past regulation. Mind you, if the A's had played sound, fundamental baseball too.... For that, you might have had better luck switching channels and watching the Little League World Series.

The Diamondbacks were the better team early on. They picked Billy Burns off in the first (a close play, Bob Melvin didn't challenge) and scored a pair of unearned runs in the second. With two outs, Tomas on first and our pitcher, Allen Webster, up, their pitcher botched a routine comebacker, to put runners on the corners. Ender Inciarte and Chris Owings made them pay, both coming through with RBI singles, to put the D-backs on the board first. However, the lead was short-lived, because the Athletics scored two in the top of the third to tie things up - and like our runs, both of their talliers were unearned.

Webster got the first two outs, and should have been out of the inning, on a slowish chopper to Jake Lamb at third. He made a probably unnecessary bare-hand play, but then short-hopped Goldschmidt with the throw, and our usual sure-handed Gold Glover was unable to dig it out, and it ricocheted past him and up the right-field line. With the speedy Burns on first, that got the A's on the board. Worse was to follow, as a fly-ball to right field caught Yasmany Tomas by surprise; his route was more appropriate for Cardinals' training camp, involving the I-10, the 202 and the 101, and the ball ended up over his head for an RBI triple, and the early advantage had been squandered.

Webster, whose previous outings at the major-league had been unimpressive, and whose Reno numbers come with a Parental Advisory warning, was actually not so much the problem this afternoon. He worked five innings and allowed three runs, but just one of those was earned. That came in the top of the fourth, as the pesky Steven Vogt homered again. This tied the game at three, as the Diamondbacks had re-taken the lead with a home-run of their own in the bottom of the third, on David Peralta's 14th bomb of the season.

He did benefit from some A's TOOTBLAN ineptness, however. In the fifth, they should have had runners on second and third with no out, but the lead runner fell rounding second, tried to go back only to realize the trail runner was heading there, and was out at third by a mile. The subsequent groundout and flyout, instead of probably scoring a pair, proved entirely harmless to Webster's final line of six hits and a walk, with a pair of strikeouts. At 72 pitches, he could perhaps have gone longer, but Chip Hale felt bullpenish.

That worked okay with Josh Collmenter in the sixth, but not so much in the seventh, as a lead off single was followed one out later by an RBI double, giving Oakland their first lead. With the runner advancing to third on the throw, Josh was lifted for Matt Reynolds, who was one of the few bright spots this afternoon, striking out two batters around an intentional walk, to keep it a one-run game. David Hernandez threw up a zero in the eighth, and Silvino Bracho made his major-league debut for us in the ninth. He worked around a lead-off single, and got his first major-league K, Butler making a strange attempt to bunt with two strikes. There was also an intentional walk by Bracho.

If we had actually won this one, Ender Inciarte's at-bat to lead off the bottom of the ninth might be a Play of the Year candidate. He had to endure multiple pitches up near his head, the last of which clearly incensed him, and brought Hale out from the dugout to calm Ender down (shown above). On the ninth pitch, Inciarte rifled the ball back up the middle - not far from the pitcher's head! - for what must have been a very sweet single. After Owings K'd - this is my unsurprised face - Goldie singled to put men on the corners, and Peralta tied things up again with a sacrifice fly, to take us into extra innings on getaway day.

Brad Ziegler survived the 10th inning, stranding the bases loaded, but again, it was no thanks to the defense. With two on and one out, the ball was hit to Owings, and Goldie lolly-gagged it over to first, expecting CO to try for the force there. Which was news to Owings who was clearly expecting someone to be covering first. Nobody was, and everyone was safe, a scoring decision called "infield single" for some reason, probably because the official scorer didn't want to get involved in assigning blame, rather than for "ordinary effort" purposes. With the bases loaded and one out, Ziegler got a pair of groundballs, for a force at home and the third out at first.

Hale tried to extend Ziegler for a second inning. After the first two in the 10th were retired, this looked like a smart move, but things then fell apart, as it took Ziegler and the newly-recalled A.J. Schugel six attempts to get the third out, as Oakland scored three times.  And that final out might only have been because the A's sent up amphibious pitcher Pat Venditte for his first major-league at-bat [he hit from the left side, in case you were wondering]. Ziegler was kinda victimized by some bad luck on ground-balls, but allowing six hits and a hit batter over 1.2 innings of work is never a good sign.

We never got the tying run closer than the on-deck circle in our half, and the loss was in the books. Losing a series at home to the team with the worst record in the American League (even if, I strongly suspect, they're a good deal better than that), and finishes a home-stand that can only be described as soul-crushing. I suspect we'll be glad to get out of Phoenix and head off to recharge the bats in Denver. 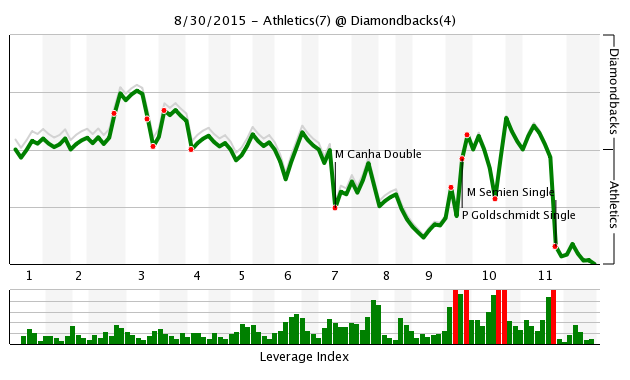 An even 300 comments, with DbacksSkins leading the way, ahead of onedotfive and JoeCB1991. Also enduring some part of the extra-inning agony: AzDbackfanInDc, GuruB, I suppose I'm a Pessimist, Jim McLennan, Makakilo, MrMrrbi, Oldenschoole, SongBird, ford.williams.10, freeland1787, gamepass, hotclaws, noblevillain, porty99 and thunderpumpkin87. There were a grand total of two recs handed out in the Gameday Thread, so I guess we were all phoning this one in as much as the Diamondbacks! On to Colorado tomorrow, with Robbie Ray starting the first game of the series there.