Jhoulys Chacin's reward for another solid start this evening at Chase Field was a ticket to Reno. However, I don't think he'll be checking into an extended-stay hotel...

Share All sharing options for: Diamondbacks 2, Athletics 3: Thanks, Jhoulys - now, pack your bags

Quite a few moving parts around the Diamondbacks, and we can probably expect this to continue through at least Tuesday, as we shuffle players back and forth in advance of the roster expansion that comes when the calendar turns to September. The apparent trade of Addison Reed is still somewhat up in the air, Reed saying after the game that all he knew about it, is what he saw on Twitter. I hope he's not doing that "searching for his name" thing again, or he's probably not going to be too happy about the reaction there... Still, we'll monitor this one carefully, and make sure it's not some kind of cruel joke played on us by the Mets.

The other news is the tonight's starter, Jhoulys Chacin, was thanked warmly for his services after the game, and the seven innings of two-run ball which he provided... and promptly optioned back down to Reno. This was necessary, in order to make room for tomorrow's spot starter, as Chip Hale continues to expand the rotation to give the Diamondbacks' starting pitchers extra rest. Sunday's game will see Allen Webster taking the mound, and we'll hope this goes better than his previous major-league starts, which were about one part of "meh" to three of "why isn't someone warming up in the bullpen already?" But I suspect Chacin will be back before far into September's calendar.

Certainly, it may be a small sample size, but his two outings, with a combined ERA of 2,70 have me wondering why no-one could be bothered to take a flyer on him before. He could increase that number by an entire run, and he would still be better than any of our current rotation. With a year of control left, and probably getting about $7m in his final year of arbitration, we could perhaps do a lot worse. Especially since that may end up being not much less than what Addison Reed will make next season for the Mets (pending a physical, he quickly added, realzing simultaneously how difficult is it to type with your fingers crossed).

This evening, as noted, it was seven innings of five hits, two walks, six strikeouts, and more or less one mistake, which was dumped into the pool area by Oakland catcher Stephen Vogt, for a two-run homer in the second inning. Outside of that, he was efficient, taking only 94 pitches to get through those seven frames, which is better than we have usually seen from the rotation. The only other bit of real trouble was in the fourth, when he put two on with one out, but a groundball was hit to Nick Ahmed and he did a nifty shovel pass over to Jake Lamb at third, nailing the lead runner there, and helping extinguish the threat.

However, the Diamondbacks offense were equally stymied by the A's starter, especially the first two times through the order. We finally got in the board in the fifth, starting off with a Nick Ahmed double that rang off the outfield wall and just about left the park. He was batting ninth, behind the pitcher, so that allow Ender Inciarte to single, putting runners on the corners, and then A.J. Pollock drove in our first run with another single, Inciarte moving to third. That brought up Paul Goldschmidt, who tied the game up, albeit with about the most rally-killing of runs, hitting into a double-play that scored Inciarte, yet emptied the bases.

It wasn't one of Goldie's best nights. He went 0-for-3 with a walk and a pair of strikeouts, and the second of those K's, in the eighth inning, led to the normally placid and imperturbable Goldschmidt taking out some obvious frustration on a bat-rack in the dugout. It was most un-Goldielike [video can be found in our #SnakeStrikes section, for those who want to peer into the abyss], and whatever the bat-rack did, I'm sure it is very, very sorry and won't do it again. After Peralta smashing his bat, is it a trend? I can understand Paul's irritation, because Ender and A.J. were doing their job ahead of him, combining to go 5-for-7 with a walk. The rest of the line-up? Not so much: 3-for-25 with a walk.

Unlike last night, where after we tied the game, we were then able to build on the momentum and take the A;s bullpen to the wood-shed, there was nothing doing tonight. After Pollock's hit ended the shutout, with no outs in the fifth, we send one batter over the minimum to the plate the rest of the way, climaxing with Jake Lamb, Chris Owings and Jarrod Saltalamacchia striking out in the ninth. Andrew Chafin, with a bit of an assist from Aaron Hill, allowed Oakland to score the go-ahead run in the eighth, before Randall Delgado relieve him to get the final out, and pitched a scoreless ninth. But it was a day we'll remember more for what happened outside the lines, between Reed and Goldie! 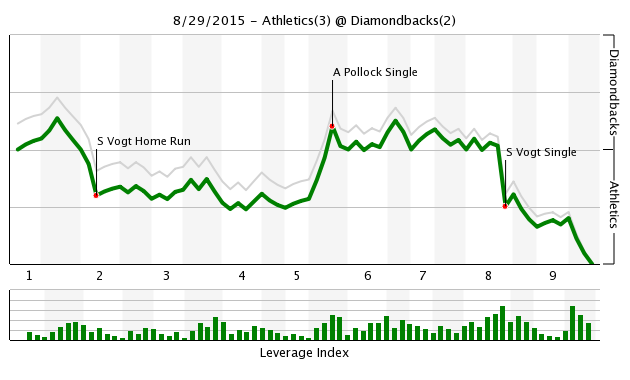 262 comments in the thread, with asteroid leading the way, ahead of GuruB and freeland1787. Also there? I suppose I'm a Pessimist, Jim McLennan, JoeCB1991, JoelPre, Makakilo, MrMrrbi, NumberOneIanKennedyFan31, Oldenschoole, SongBird, asteroid, gamepass, hotclaws, makattack71, noblevillain and onedotfive. No comment got more than two recs, so I'm with-holding any comment of the thread award. The game, frankly, didn't deserve it. Still, we'll go for the rubber game tomorrow, with... Webster on the mound. Yeah, I'm not feeling too optimistic about that one, but hey, I always hope to be pleasantly surprised.