Share All sharing options for: Diamondbacks 6, Athletics 4: Beercap, with guests

Swept away by the Cards, that was less than fun.  Here's to hoping beer and a guest recapper can redeem these Dbacks.

Coda, bells and whistles, by Jim

The eighth inning was low-key on both sides. Andrew Chafin worked the top of it for the Diamondbacks, retiring the A's hitters in order. In our half, Welington Castillo got a lead-off double but was stranded on third, and the team turned to David Hernandez for the ninth. Unfortunately, it didn't go well, as a lead-off single was followed by a one-out homer. I'm increasingly doubtful Hernandez will be returning in 2016, which is kinda sad. Brad Ziegler came in now it was a save opportunity, and another single brought the tying run to the plate. However, Ziegler duly Ziegled, dialing up a double-play for his 22nd consecutive save. Only J.J. Putz (28) has had a longer run. 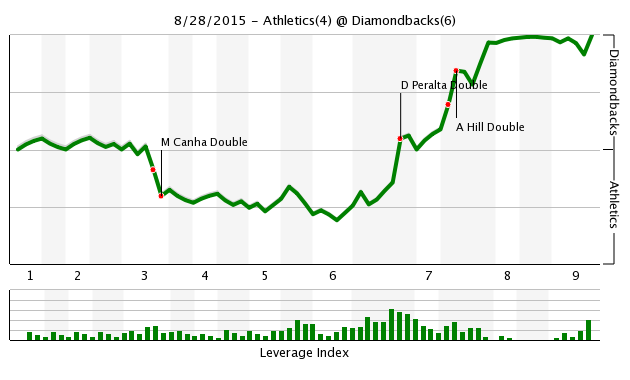 Fairly lightly-trafficked GDT, finishing just shy of 300 - seemed to perk up a bit, along with the offense, later on! GuruB was the most active, ahead of SongBird and JoeCB1991, with the others present being: Augdogs, Jim McLennan, MrMrrbi, NumberOneIanKennedyFan31, Oldenschoole, TryinToBeFan, Xipooo, asteroid, freeland1787, gamepass, hotclaws, onedotfive and shoewizard. hotclaws picks up Comment of the Night.

Ah, a good MST3K reference always hits the mark...  Tomorrow sees Jhoulys Chacin makes his second start, after a solid appearance his first time out. Can we start a winning streak? Find out then...