To be the best you have to beat the best and although the current monarchs this season are looking a bit battle weary and harried around the edges, the DBacks simply gaffed when the bright lights shone upon them.

So we failed the audition and to be honest, this was the game that we (based on my humble opinion of the pitching matchups) had the best shot in because while the Cardinals staff has been otherwordly this season, Lynn has been one of the few members of their staff who has been mortal upon occasion.

So what went right?  Beefy did his thing by going yard and Aaron Hill continued a trend of giving the DBacks a two out run.  Mr. Chacin put forth an admirable performance on short notice and outside of Matt Carpenter going gonzo on one pitch, he pitched pretty well.   Sure, he gave up a knock here, a seeing eye extra base hit down the line, those things are to be expected, they are the Cardinals after all. David Peralta showed up (perhaps a bit of incentive against his old club).  The team kept battling, even getting a run against the vaunted Rosenthal, yet not quite enough clutch.  Those were the good things.

What didn't go right?  Two double plays with the sacks juiced.  Errors in the field and a bullpen that simply was unable to put anyone away.  It wasn't just the errors, there was the bobble here, the double clutch there, the mental mistakes that we've rarely seen out of this club.  Granted, you're getting done in by guys like the Cardinals, but again, if you want to be in the same conversation as these guys, you HAVE to get them out (or get them home, in our case) and when it really mattered, our guys didn't do it.  Too many chances missed and wasted opportunities and you simply can't do that when you're dealing with the Cardinals.

Tune in tomorrow if we fare any better against Mr. Garcia....

Really?  I didn't recognize them:

Tomatoes at the screen: 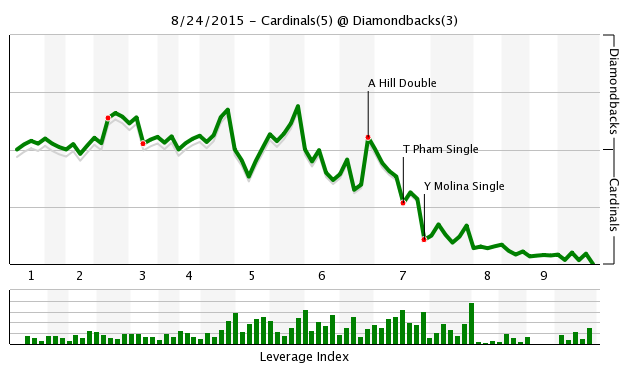 Well, that was ugly. And I mean the Gameday Thread as much as the game, one I think we'll all forget by tomorrow. Except, perhaps, the person who changed his username, so is now stuck with it, because you only get one change. freeland1787, thunderpumpkin87 and JoeCB1991 led this sharp bucket of water applied to any hopes we had. Also present: AzRattler, BenSharp, Dbackguy, GuruB, I suppose I'm a Pessimist, Jim McLennan, Makakilo, MrMrrbi, NumberOneIanKennedyFan31, Oldenschoole, SongBird, Zavada's Moustache, asteroid, datr22, ford.williams.10, gamepass, hotclaws, makattack71, noblevillain, onedotfive, piratedan7, porty99, shoewizard, and since_98.

If we'd won, I'd probably have gone with GuruB's comment about his new job. But instead, let's go with an appropriate summary of the game from shoe.

I might be inclined to supplement it, and say that this game was what waterboarding yourself must feel like. Because too much of the damage here was self-inflicted by the Diamondbacks. Infield and outfield errors, failure to cover third-base, inability to turn double-plays, and that's not even getting into the whole absence of clutch hits, as we wasted a raft of opportunities. You can't play that badly against the team with the best record in the NL and expect to win. So, here's to the team playing much better tomorrow, with Robbie Ray taking the mound. That would make for a far more pleasant experience all round!