The Diamondbacks were once again presented with the opportunity to move their record over .500, but this time they were able to capitalize. A strong start by Chase Anderson (6.2 innings of shutout ball), some timely offense, and strong defense resulted in a four game road sweep of the Reds. Wellington "Beef" Castillo went 2-4 with a home run, and David Peralta hit a two run home run for some late insurance. After Anderson's exit, Addison Reed and Matt Reynolds (welcome back!) finished off the shutout. The Dbacks move to one game over .500 for the first time since April when they were 8-7, and with the Dodgers still playing the Dbacks move to 5.5 GB in the NL West.

The game started at an agonizingly early 10:10am PST, but such is the life of a get-away game played in the Eastern Time zone. Ender Inciarte led off the game with a double down the left field line. Paul Goldschmidt walked on a full count one batter later, but Raisel Iglesias ended up striking out the side to eliminate the threat. In the home half of the first, the Reds had a similar series of events with Philips singling and Votto walking, but no runs would score.

The second inning continued the theme of the Red's copying our offense with both teams going three up-three down with a GIDP for each. The third inning also had each team go three up-three down, with the home team grounding into another double play. Although the double play will go into the books as a 3-6-3 double play, it was not of the typical variety. Goldy fielded a sharp grounder, stepped on first, and threw to Ahmed who started a quick game of pickle resulting in Goldy tagging out the runner. After three innings, the Diamondbacks and Reds would remain scoreless... Tacos were so yesterday.

The fourth inning looked to be more of the same until The Duke of Wellington did what he does best and led us to victory over Napoleon Bonaparte... err.. I mean hit a home run. The umps appeared to be secret members of the French Grande Armée since they reviewed The Duke's home run. But to no avail because you can't change history. Sorry umps, The Duke of Wellington beat Napoleon! The rest of the fourth was just a bunch of outs with nothing too exciting. Dbacks lead the Red's 1-0.

The fifth inning was back to that three up-three down junk, with Raisel Iglesias unleashing his inner Nolan Ryan by striking out all three Diamondbacks hitters (giving him 10K through 5 IP). The home half of the fifth had the Red's threatening to score, but fortunately for the Dbacks they have Superman playing first base. With runners on first and second with one out and the pitcher at the plate, it appeared that a sacrifice bunt was in order. However, Iglesias pulled back the bunt at the last second and slapped the pitch hard to the right side of the infield. But Paul Goldschmidt snared the line drive, turned around, and sprinted back to first base for a 3-unassisted double play to end the inning.

The sixth inning saw some repugnant defense by the Reds, leading to another run for the Diamondbacks. The only other thing that happened in the stixth was a Joey Votto walk, which should surprise no one. Jake Lamb led off the top half of the seventh with a walk, but was stranded out on the base paths all by his lonesome. With two outs in the home half of the seventh, Skip Schumaker doubled to right field to bring the tying run to the plate. Much to the chagrin of NumberOneIanKennedyFan31, Hale decided to bring in Addison Reed. Fortunately, he came in and retired Ryan Lamarre rather quickly to end the inning. Going to the eighth, Dbacks lead the Reds 2-0.

After two quick outs in the top half of the eighth, Paul Goldschmidt decided to walk and let Peralta end his mini slump. David Peralta did just that by crushing the first pitch he saw to deep center field for a two run home run. Beef and Lamb continued things with back-to-back two out singles, and speaking of beef... tacos are so close I can taste them. Yasmany Tomas ended my tacos dream though by striking out to end the frame. Addison Reed came back in for the bottom of the eighth and retired the side in order to preserve the shutout. Dbacks lead the Reds 4-0 going to the ninth.

Aside from an Ender Inciarte walk, there was nothing of note in the top half of the ninth. Making his first appearance since June 9th, 2013, Matt Reynolds came in to close out the win. And boy, it looked like he never even left! He quickly struck out Joey Votto, got Todd Frazier to fly out, and struck out Brayan Pena to end the game. Despite a ridiculously strong start by Raisel Iglesias (7 IP, 3 hits, 1 ER, 13 K), the Dbacks found a way to win and conquer mount .500! Now hopefully we slide right on down the other side cruising into winning territory.

The Diamondbacks now head back home after a long, but successful, road trip. However, back home, the Shire does not wait; Smaug wrapped in a Cardinal's jersey is what we have to look forward to. Buckle up Dback fans, this is where we see what this team is made of!!! 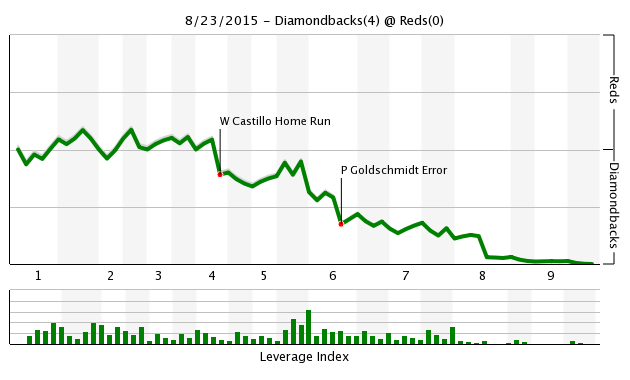 their taking out their frustrations on the Dodgers.

Disclaimer: my views are my own and do not necessarily reflect the opinions of the membership or management of the Snakepit nor that of Vox Media.

The team returns to Phoenix, as thunder noted, to await the arrival of the Cardinals. Ulp!