The biggest slug-fest in over three months ended up going the D-backs way, though no thanks to certain pitchers we will name and shame. But Paul Goldschmidt ended his HR drought in no uncertain fashion, with #23 and #24.

If you were late arriving in your seat on the sofa for this one, you missed some good stuff. Because, no outs, three batters and eight pitches into this one, the Diamondbacks had a three-run lead. That came courtesy, firstly, of Ender Inciarte's first-pitch homer, his fourth of the season. He became the third Diamondback to homer on the very first pitch of a game; the first was Eric Byrnes in May 2007, and the previous one was Gerardo Parra in May 2013. The latter contest, you might remember, because that first-pitch homer was the only run of the game in Miami, with Brandon McCarthy spinning a complete-game three-hitter.

Any thoughts that might happen again in Cincinnati lasted a good two, possibly three minutes. For, after A.J. Pollock legged out an infield hit for his ninety-seventh of the series (approximately), Paul Goldschmidt came through with a home-run the other way. Yes, our long, national nightmare is over: Goldie's 22-game homerless streak, lasting more than a hundred PA, came to an end. It wasn't actually the longest of his career: in 2012, he went 26 games and even 34 games between home-runs, the latter covering 145 homerless trips to the plate. But it's safe to say, expectations now are just a little higher for Paul!

Staked to a three-run lead before he took the mound, Randall Delgado was able to settle in, throw strikes and put up a quick zero on the board. Of course, "was able to" is not the same thing as "actually did". Four batters in to their half of the inning, the Reds had also scored their first run, and had the tying run on base with just one out. He escaped without further damage, and even had a relatively stress-free second, after a lead-off walk. However, despite David Peralta restoring the three-run lead, hitting into a double-play with runners in the corners in the third, even that lead proved a fleeting, ephemeral thing.

For Delgado did not make it two outs into the bottom half, as pre-game concerns about how he'd fare the second time through the order proved unfortunately well-justified. He got the first batter, but the next four all reached, on a walk and back-to-back-to-back doubles, and our advantage had gone as quickly as it had arrived. Delgado was also gone, hopes of getting five innings proving woefully optimistic. He lasted 2.1 innings, allowing four runs on six hits and two walks with two strikeouts. Fortunately, Zack Godley was able to hold things there, and worked 3.2 innings of one-run relief, on a hit and a walk with three K's.

While he did so, the Diamondbacks offense re-took the lead scoring single runs in the fourth and fifth, on sacrifice flies by Jarrod Saltalamacchia and Aaron Hill, so at the end of six, we were holding on to the lead, by the odd run in eleven. Then came Goldie: he cracked another two-run shot, this time scoring Enciarte, and the three-run lead was restored. Naturally, it immediately looked a little wobbly as Andrew Chafin, who hasn't allowed a run since before the All-Star break, put the first two men. However, he was able to get the next two, and David Hernandez completed the seventh, then pitched a scoreless eighth.

In between times, the Diamondbacks opened things up, scoring three more. It started with Jake Lamb just legging out an infield hit, which required a review. Other hustle proved equally productive, giving RBI to Chris Owings and inciarte, with another run scoring on a wild pitch. With a six-run lead in the ninth, what could possibly go wrong? Answer: Keith Hessler, who turned those six runs into a save situation, retiring one of five batters faced, and forcing Chip Hale to turn to Daniel Hudson for the final two outs. Hessler's ERA after eight appearances is now 15.19. This would be more the other five pitchers used today, added together...

Still, we won. So: WOOOO! The top three in our order were paticularly productive, Inciarte, Pollock and Goldschmidt combining to go 9-for-14 with seven RBI and seven runs scored. Particularly pleased to see Goldie get back in the swing of things, with four hits, four RBI and three runs; hopefully, it is not a false dawn. Pollock had three hits, and I think has become the first Diamondback since Steve Finley in June 1999 to record 11 hits over a three-game span. Owings also had three hits, and has quietly got his OPS up to .617, the highest it has been since May 21. Heck, even Godley got his first hit, a bunt single. The offense definitely bailed out some shaky pitching tonight. 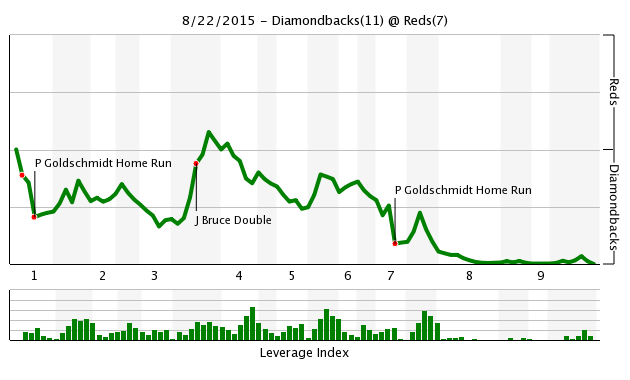 Tomorrow, the team will go for a four-game road sweep that would also push their overall record for the season back in positive territory. Chase Anderson, after a brief stay in Reno, takes the mound for the D-backs, but it would not surprise me if there were to be a roster move between now and then, to try and provide some more coverage in the event of a short outing. It isn't often you manage to win a series when your starter in two of the games go two and 2.1 innings, but here we are! We'll take it, for now....